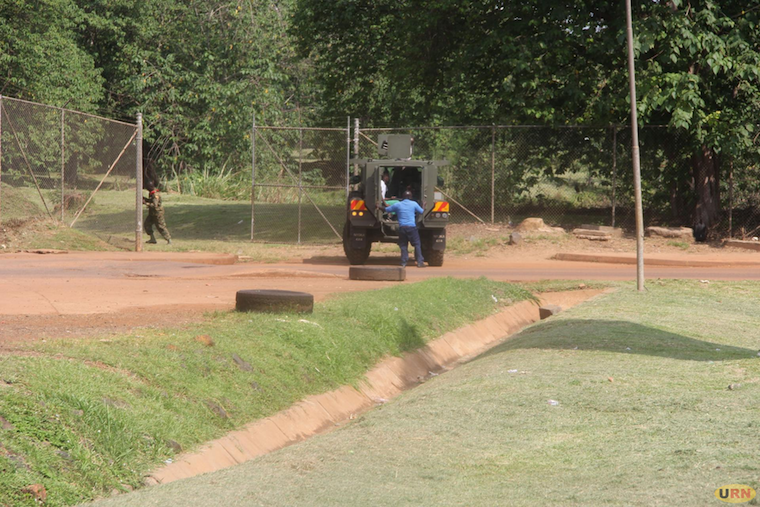 The armoured vehicle that was dispatched to the scene

Private Jonan Katusiime committed suicide after shooting dead his unit commander, sergeant Peter Ouma in Jinja. It is alleged that the two soldiers attached to the marine brigade, have been engaged in endless quarrels after Ouma refused to grant Katusiime a pass leave.

The latest shooting within the force comes at the time when the army has just launched investigations into circumstances under which Captain Edward Ssebagala shot himself dead after injuring his AMISOM colleague in Somalia Lt. Cpl Jackie Nabifo this week.

Katusiime shot Ouma at around midday today at the old Jinja bridge and then dumped the body in R.Nile. He then disarmed his other four colleagues, forcing them to flee the UPDF camp at the old bridge.

A soldier who preferred anonymity said that Katusiime who had already cocked his gun warned the soldiers that if they failed to abide by his commands and leave the camp, all of them would be shot dead.

“The whole scenario began at 12:00 noon when all our guns were embedded in the tent, Katusiime cocked his gun and ordered us to leave the camp, an instruction we followed for our safety and that of the entire public,” he says.

The situation remained tense for close to three hours as Katusiime refused to surrender, forcing UPDF and police officers to restrict traffic at the bridge until 3:30 pm, when a UPDF armored vehicle attached to Magamaga military barracks, cordoned off the area.

On seeing the armored vehicle, Katusiime shot himself twice in the stomach, dying instantly. Katusiime’s body was taken to Jinja regional referral mortuary for postmortem. The police has embarked on searching for Ouma’s body.

Jinja zone army spokesperson, George Musinguzi says that the police is working together with UPDF to identify the cause of the shooting. Incidents of soldiers shooting at themselves and civilians have become too frequent in the past few years.

Last month on May 13, several UPDF soldiers shot at themselves for reasons unknown reasons. In 2016, Sgt Isaac Obua shot dead seven of his colleagues at Makindye military barracks before he was gunned down following a quarrel with his girlfriend.

In December 2018, the UPDF court martial sentenced Pte Newton Okello to 80 years in jail for shooting dead a pregnant woman, her husband and their son. In 2013, Private Patrick Odoch killed 11 people near Bombo barracks.

12
0 #11 Rwasubutare 2019-06-22 11:49
A Commander is a ranking commissioned officer who's in charge of a platoon as the smallest unit, then company, battalion, regiment, division, brigade, and then army.

A Sergeant is not a Commander. A Sergeant is a non commissioned officer who's in charge of troops. He reports to commanders. You made it seem like a private killed a Captain or Colonel.

IT IS YOU WHO DOES NOT KNOW WHAT A COMMANDER IS.

Such is the hierarchy even in LRA and ADF.... which armed forces did you serve in? Or are you in opposition for sake of opposing?
Report to administrator
12