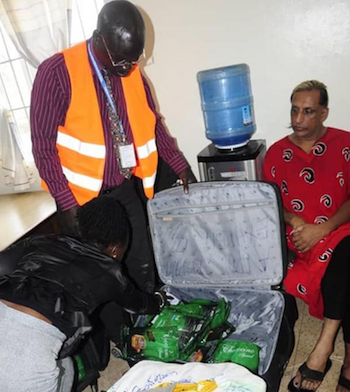 Ruben looks on as police search his bags

A Dutch national, Rai Jhinkole alias Ruben has been arrested by the aviation police at Entebbe International Airport for allegedly smuggling 64 kilograms of heroin. Ruben was intercepted on Wednesday afternoon enroute to Italy aboard Emirates airlines with several packages of heroin.

Deputy Kampala Metropolitan police spokesperson, Luke Owoyesigyire, says Ruben was intercepted at the departure lounge holding two suitcases and upon screening they found drugs. Aviation police interrogated Ruben who reportedly accepted and revealed that he was moving the drugs to Italy.

“He was destined to travel to Italy aboard Emirates and was intercepted with two suitcases containing altogether 59 packages each labeled "chococino special” and "richer chocolate taste,” Owoyesigyire said.

Police explained that the packages had a cream powdered substance suspected to be narcotics that was later identified as heroin. The total gross weight for the 59 packages was weighed and established as 63.9kgs.

“Ruben is currently detained at aviation police custody in Entebbe and the exhibits pending forensic analysis at the Government Analytical Laboratory (GAL). After analysis, his file will be taken for legal advice to the resident state attorney (RSA) and he will later be arraigned before courts of law,” Owoyesigyire said.

Police says it intends to expand investigations into the matter to establish whether the suspect is part of an organised gang, network or that of an individual worker. Tinka Zarugaba, the commander of the Anti-narcotics unit of Uganda Police, says a kilogram of heroin on black market costs about $15000 (Shs 56m).

In total, 64kg of heroin are valued at Shs 3.5 billion. In May, aviation police arrested seven suspected drug smugglers with 16kg of heroin. Owoyesigyire identified the suspects as Nansamba Zam Salim, a businesswoman and resident of Kawempe-Kulukadde, Kawempe division and Andrew Luwemba Kwagalakwe, a clearing agent with Confanent consult Co. in Entebbe and resident of Lugonjo Nakiwogo zone.

+2 #1 Concerned Ugandan 2019-06-14 12:06
I wonder how much of it will still be available to produce in court at the end of the day. Our friends the police are well known for their ability to help evidence 'go missing'.

Especially where the evidence is as valuable as this one!
Report to administrator
0 #2 Mubiru 2019-06-14 19:39
How long does it take a person to go to court who was caught red handed with enjaga and accepted its possession?

In May without giving the exact date (could be a month now) 7 drug smugglers , like the Dutch man, were arrested at Entebbe airport.

They never denied the crime. What further investigations do the prosecutors need before the criminals appear in court for sentencing.

The public is fed up with being duped with the so called investigations when the purpose is to free drug smugglers after bribing the so called prosecutors with millions of shillings from the sales of their njaga.
Report to administrator