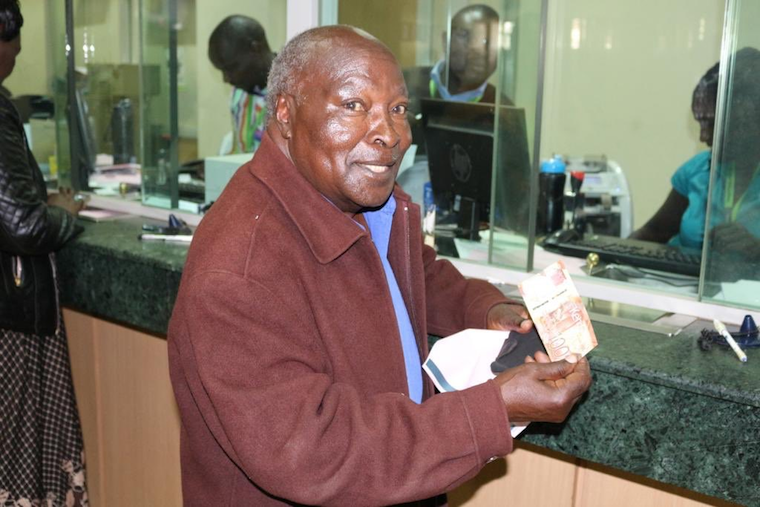 A happy Kenyan citizen with the newly issued notes

Uganda has joined Tanzania in suspending the conversion of Kenyan Shillings as a measure to stop the rush to wash in illegally got cash in neighbouring countries after Kenya decided to issue newer series.

In a statement last evening, Bank of Uganda said it had been informed by the Central Bank of Kenya (CBK) that they have issued a new series of banknotes effective May 31, 2019, with a view to combat illicit flows and counterfeits into Kenya.

“Bank of Uganda will not accept Kenya Shillings at its counters with immediate effect,” BOU said in a statement. “CBK has also suspended currency conversion and repatriation of Kenya currency.”

BOU added that going forward, “[people] are advised to subject all flows from and into Kenya to enhanced due diligence. Please be advised that changing Kenyan currency from old to new banknotes can only be done in Kenya.”

Robert Mpuuga, a banker in Uganda, told URN they were not accepting the 1,000 Kenyan Shillings note (equivalent to 36,000 Uganda Shillings) but were converting smaller denominations.

“We are converting the Kenyan shillings but not accepting the 1,000 notes,” Mpuuga said.

The 1000 Kenya Shilling note is the highest currency bill in Kenyan currency but also used to transfer and launder huge amounts of cash by the corrupt, money launderers, and counterfeit kings.

Kenyans have up to October 1 to have turned in this note and thereafter that the older version will be invalid. There is no deadline for turning in the other notes of lower bills. John Njoroge, the CBK governor, said last week: “Illicit financial flows involving the Kenya Shilling is not just in Kenya. They also affect our neighbouring countries.”

This suspension has implications for the Kenyan Shilling, with the likelihood of falling in value since people won’t accept to change it.

Alternatively, those with cash will have to carry it across the border to have it exchanged for newer series – a huge inconvenience, but Kenya says it is worth it in its war against corruption and counterfeits. Kenya says it is fighting corruption as officials are keeping huge swaths of money in their homes.

Those exchanging money below Kshs 1 million can do it anywhere in Kenya with no need to have a bank account but must have official identification.

Those exchanging money in the value between Kshs 1 million and Kshs 5 million, must do it at their own banks and must have an account there. If they don’t have accounts, they must contact the central bank to give them approval. They must also prove that the money belongs to them.

Similarly Those with the amount above Kshs 5m must contact the central bank. Some Kenyans have rushed to court to challenge the decision. They have mostly been annoyed by the decision to have Jomo Kenyatta’s statue appear on some of the notes.

They say their 2010 Constitution doesn’t allow the appearance of any individual on new bank notes. The new notes also showcase Kenya’s wildlife.

This is not the first time a country is withdrawing old notes to combat fraud and illicit flows. India did it overnight in 2016. Nigeria and Ghana have also done it before.

0 #1 Christopher Omoding 2019-06-11 23:33
Well done Kenya! You have exhibited seriousness in the fight against corruption! I hope your neighbour to the West can learn a thing or two.
Report to administrator