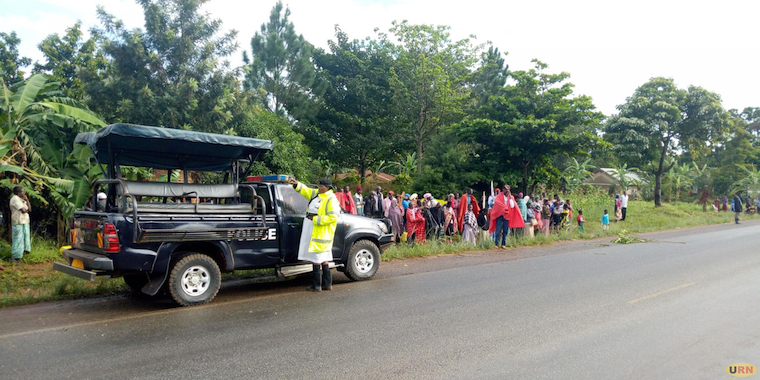 The shocked pilgrims at the scene of the accident

A commuter taxi has knocked dead four Kenyan pilgrims and critically injured ten others along the Iganga-Tororo highway. The accident occurred around 5:30am on Sunday morning at Waina village in Mayuge district.

The deceased Kenyan victims who were on their way to Namugongo Martyrs shrine for the Martyrs Day celebrations on June 3 have since been identified as Sarah Adiambo, Godfrey Abaga, Kevinah Akila, and Roselyn Mutunga.

Their bodies were taken to Iganga general hospital mortuary pending postmortem. The deceased were part of 106 elderly pilgrims mainly from Bungoma Catholic diocese in Bungoma county in Kenya.

Beatrice Apinyi, the traffic officer in charge of Magamaga police post, says the pilgrims were knocked dead by taxi registration number UBD 860W destined for Mbale from Kampala. She says they have launched a manhunt for the taxi driver who fled the scene shortly after the accident. She also urged motorists to be mindful of trekking pilgrims.

The leader of the deceased pilgrims, Peter Sosso, says he is leading a group of elderly people who can only walk for 20kms a day and they had expected to stopover at Bugembe parish when the unfortunate incident happened.

Agnes Kibone, who is nursing wounds at Iganga hospital, says she was shocked to see her colleagues perish in the accident in the middle of the early morning rain.

0 #1 Amooti mugi 2019-05-26 18:58
Oh dear...!!! So sad for the Kenyan fatalities...
In future, walking pilgrims could be required to pay on reflective jackets(if possible)...Uganda police did it's part recently, and I thank them for that, and advised motorists to drive carefully on major highways because there were pilgrims heading on foot to Namugongo.

That Ugandan fool (the fleeing driver) ignored the police warning...He should be caught and made to pay for his recklessness..
Every life is precious- Ugandan , Kenyan, etc
Report to administrator
+2 #2 Webz 2019-05-27 07:45
So sad. Very unfortunate for the foreign pilgrims. I hope their souls will rest in godly peace as they died in the process of glorifying God.
Report to administrator
+2 #3 Lakwena 2019-05-27 08:35
This is an ugly dent in the national conscience. If it was intended, how could anybody do such a thing at such a time? Could it be one of those car terror attack on innocent Christians?

May the souls of the victims be at peace with Christ.
Report to administrator
+1 #4 John Nyakoojo 2019-05-27 13:22
It is quite unfortunate, my the Almighty God console the bereaved families.

So sad. Very unfortunate for the foreign pilgrims. I hope their souls will rest in godly peace as they died in the process of glorifying God.