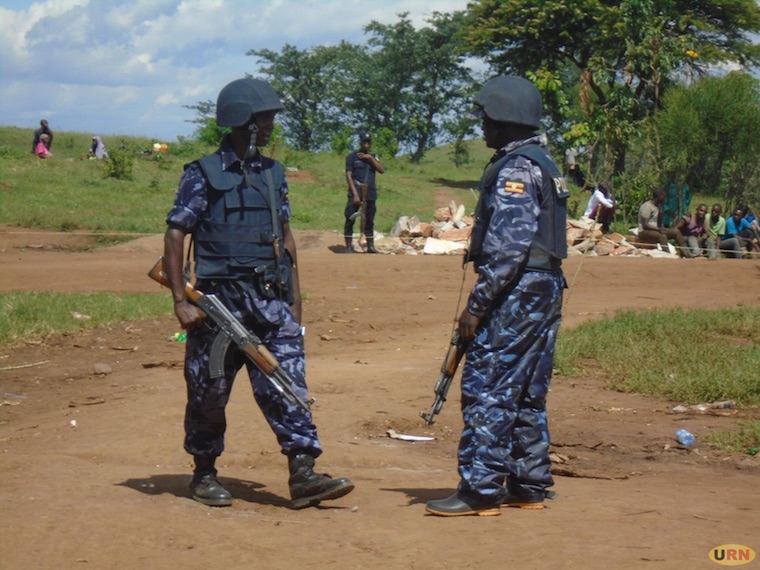 The Rwanda government and its police have issued a statement justifying the shooting dead of two people, a Ugandan and Rwandan by the Rwandan security officers.

According to eyewitnesses, the two were shot dead by a Rwandan soldier at Hamisavu trading center in Mpororo in Kiruhura village in Kashekye parish in Kamwezi sub-county. Eyewitnesses say that it all started when Rwandan soldiers crossed into Uganda to arrest a suspected Rwandan smuggler who tried to cross to Rwanda with secondhand clothes.

The smuggler had fled back to Uganda after realizing that Rwandan security were in hot pursuit. A scuffle broke out when Rwandan soldiers impounded a motorcycle registration number, RE736G, which the smuggler was using but met resistance from residents who accused them of crossing into Uganda illegally.

The soldiers who were over 40 in number, managed to retrieve the motorcycle, goods and the unidentified suspected Rwandan smuggler who had escaped. Uganda’s Foreign Affairs ministry issued a protest note condemning the incursion by the Rwandan soldiers on Uganda’s territorial boundary and called for appropriate action against the perpetrators of the attack.

However, on Saturday evening, the Rwanda National Police spokesperson, John Bosco Kabera issued a statement refuting the Ugandan narrative, saying the said incident occurred at Tabangwe sector in Nyagatare district. He says Rwandan security shot Ncherengye and Nyesiga when he turned violent and resisted arrest with the help of other people from Uganda who were armed with machetes.

Kabera also notes that no further action was taken after the incident by security officials who were on routine patrol. He notes that Rwandan security forces are known for professionalism and they need no lectures from anybody. Rwanda’s Foreign Affairs and International Cooperation ministry also said the officers opened fire in self-defense when they shot the two people.

Rwanda also insists that none of its security officers crossed into Uganda, adding that once the mob crossed back into Uganda with their wounded associates, Rwandan security ceased the pursuit.

Pierre Tebuka, the Nyagatare district police commander in Rwanda, Emmanuel Hatari, the Eastern Province region police commander and other security officers crossed into Uganda on Saturday evening in civilian attire with authorization from Ecega to inspect the crime scene.

It is still unclear how Ncherengye’s body moved from the Rwandan side to Uganda as claimed by the Rwandan authorities. It is also unclear how; Nyesiga walked from Rwanda to Kamwezi health centre IV in Uganda from where he breathed his last yet the Rwandan soldiers claim he was shot in Tabangwe sector in Rwanda.

It is also unclear why the Rwanda police statement indicates that Ncherengye was the one smuggling secondhand clothes on a motorcycle to Rwanda yet eyewitnesses, say the unidentified smuggler took off to an unknown location. It is also unclear why Rwandan security officials crossed to Uganda to access the scene of crime yet they claim that the victims were shot in Rwanda.

By Sunday morning, heavily armed police were still deployed on both sides of the border. Bodies of the deceased were still lying at Kabale Regional Referral hospital mortuary. Ugandan authorities say they will hand over Ncherengye’s body to the Rwandan government at Katuna border on Monday, according to the Foreign Affairs ministry statement.

This isn’t the first time Rwandan soldiers are shooting at suspected smugglers. Earlier this month on May 3, Rwandan soldiers shot Innocent Ndahimana, a beans trader and resident of Nyakabungo village in Chumbe in Gicumbi district Northern Province in Rwanda while smuggling beans to Uganda through Katuna border in Kabale district.

Rwanda closed its borders to Uganda on February 27, 2019 to purportedly expedite the construction of the single customs at Gatuna border. Rwanda advised truck drivers destined to Kigali to use Kagitumba border via Mirama hills.

However, Rwandan officials including President Paul Kagame later accused Ugandan authorities of abducting its citizens and locking them up in ungazetted areas. Rwanda also accused Uganda of hosting and facilitating dissidents especially Rwanda National Congress (RNC) and the Democratic Forces for the Liberation of Rwanda (FDLR), which have declared war on the Kigali government.

Rwanda advised its citizens against travelling to Uganda, saying it can't guarantee their safety. Rwanda also deployed security officials and destroyed all temporary bridges to bar Rwandans from crossing to Uganda. Despite the border closure and warnings, Rwandans continue to cross to Uganda using porous borders to look for food, healthcare services and goods.

They insult you steal from you, sleep with you r daughters and wives and probably kill you in the process. History is my witness, let's watch the drama develop!
Report to administrator
12