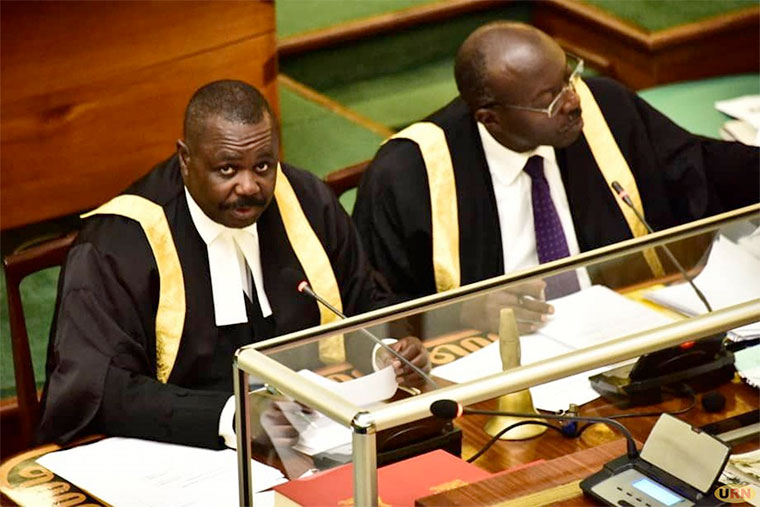 Parliament has today Friday in an unprecedented manner, passed the 2019/2020 budget totalling Shs 40.48 trillion without debate on the Budget Committee report.

The report was presented on Thursday afternoon by the committee chairperson Amos Lugoloobi as well as a minority report by Butambala County MP Muhammad Muwanga Kivumbi.

The Shs 40.48 trillion budget is up by Shs 8 trillion from the current 2018/2019 financial year budget of Shs 32.7 trillion. The approval in a plenary session this morning chaired by deputy speaker Jacob Oulanyah, came after clearance of different budget figures for expenditure to government ministries, departments and agencies ahead of the set May 31st deadline specified in Public Finance Management Act.

Contrary to standard parliamentary processes and procedure where a debate is held on reports presented before any decision is made, Oulanyah today stopped debate on the Budget Committee report despite attempts from Budadiri West MP, Nathan Nandala Mafabi to raise queries on the police budget.

With promises to Nandala that debate on the budget estimates would come at a later stage, Oulanyah uninterruptedly steered the appropriation of figures until the final stage when the budget was passed. Following the passage of the budget, Kivumbi who was representing the Leader of Opposition (LoP) expressed dissatisfaction with the passing of the budget without a debate.

"Much as the leader of government business has congratulated the House, we do the same, but we take it with a heart of stone and it will be the first budget that was passed without debate. That, we take note and that is unprecedented and members that had opinions were not listened to and it stretched our civility to the limit. In future the biggest room in any house is the room for improvement. In our humble view we are capable of doing better and scaling to higher heights and we can do a better job than we have done today." said Kivumbi.

Without directly responding to queries of absence of a debate, Oulanyah said it has been an abnormal year especially in regard to the consideration of budget. He blamed the abnormality to government’s mismanagement of the budgetary process. On Wednesday this week, ministry of Finance presented an additional budget full of variations between the soft and hard copies indicating more funds totalling Shs 934.4 billion contrary to the Shs 929 billion figure officially tabled before parliament earlier. Oulanyah said given the circumstances, the passing of the budget without debate was more important than following the rightful procedure.

"Members, I share the sentiments of the acting leader of opposition, this has been a very abnormal year, a year in which I shouldn’t say more. A very abnormal year in terms of processing this budget, but I thank you for the endurance and perseverance and also for agreeing that the budget serves a bigger purpose than if we are go to through that we should have gone through. We would have had difficulties. We all know that we never had ministerial statements even a month after the deadline. I was hoping that the government chief whip when she got up to appreciate the members, could have concluded with an apology and promised to do better. To just thank when members have gone through hell..." Oulanyah said.

Government chief whip, Ruth Nankabirwa apologized for the mishaps in the budget process promising that the executive is to do better in future.

"I have done two apologies during this process, and I sincerely stand here to do the final apology because we lacked in as far as the time frames are concerned and we promise to do better. I also request that the induction that we do when we have just come here [parliament] is not enough. I pray that in between the five years, we do a refresher induction such that we save on time when we come here and also improve. By we, I mean all of us members of parliament including my cabinet ministers because if one arm doesn’t do what they are expected to do, we make the other arm which is the legislative arm, also not to perform. I sincerely apologise on behalf of my team." she said.

The others are improving governance and sustaining security; developing a financing framework anchored on both an effective domestic revenue mobilization strategy and a responsive debt management strategy. The approved budget is to be read out to the public on 13th June 2019 by Finance minister Matia Kasaija.

+10 #1 Odongkara 2019-05-25 09:48
In Uganda what matters is what comes from above otherwise institutions like parliament, judiciary and the cabinet are but rubber stamps of bwana Museveni.

So the budget is debated or not is very inconsequential, what stands to be followed is what Yoweri Kaguta wants.
Report to administrator
+2 #2 rubangakene 2019-05-25 18:09
Whether their arms were "twisted or palms greased", these 650 individuals' time are numbered, the end is nigh and believe me if your name is on the proverbial "black book" you are going to face the full wrath of wananchi come the time!
Report to administrator
+1 #3 Akot 2019-05-25 20:32
Odongkara, thanks!

The only humane thing Ugandans can do now is not vote for any of them any more as continuing doing so only make them robots programmed to do so!

In fact, as the tribalistic system stands & maintained by Ugandans, Museveni is going no where, so does not need to be elected as he will win through out!

But why would Ugandans continue making the tribalistic system of rule & Museveni's hold on to power legal & constitutional by voting, knowing no outsider will say a word against Museveni as long as our people go along with it?

Why have mps when they don't serve/develop constituencies?
Report to administrator
+2 #4 Willy 2019-05-25 20:53
Law and Order (police brutality) receives 1.6 trillion; Security (is it preparation for war?) receives 3.6 trillion; classified expenditure receives xx trillion. And after 6 months there will be supplementary budgets for these sectors!

Agriculture, which employs at least 75% of the population receives only 1 trillion ( in a budget of 40 trillion shillings) !. Long Live, the Banana Republic of Uganda !
Report to administrator
+1 #5 Concerned Ugandan 2019-05-27 10:12
Quoting Odongkara:

In Uganda what matters is what comes from above otherwise institutions like parliament, judiciary and the cabinet are but rubber stamps of bwana Museveni.

So the budget is debated or not is very inconsequential, what stands to be followed is what Yoweri Kaguta wants.

Agreed. In fact I think that the circumstances of the passing of this next budget are more reflective of the truth than the usual katemba where Parliament pretends to be working!

I often wonder why Parliament is not simply abolished and M7 rules by decree instead of pretending to be democratic. At least Amin was frank in that regard.
Report to administrator
+1 #6 Akot 2019-05-27 19:21
rubangakene, agreed, but,

There is no need for 650 individuals to face the wrath as it just takes "abstantion from paliamentary polls" & there will be no mps serving Museveni any more!

Why go on voting mps when not 1 constituency is developed with Education/Agriculture put FIRST to ensure job creation, then tax money to help with; housing, healthcare...!

Why will Ugandans continue legalising Museveni's dictatorship by making it look like a democracy, when it's not?
Report to administrator
0 #7 Akot 2019-05-27 19:34
Quoting Concerned Ugandan:

I think that the circumstances of the passing of this next budget are more reflective of the truth than the usual katemba where Parliament pretends to be working!

I often wonder why Parliament is not simply abolished and M7 rules by decree instead of pretending to be democratic. At least Amin was frank in that regard.

Ugandans can just let Museveni rule without mps & this will stop the dictator say it's a democratically run country!

Europeans came out to make their stand at polls this time, when in the past, they didn't care & less than half voted! The result of EU election left British contesting & wanting second Brexit referendum without a say, while T. May is not spat on any more!

the banana republic is just what Museveni wants it to be! It's up toUgandans to say NO in UNITY, as the rest of the world does!

Ugandans do not want to Reform the Republic, so they can, after their UNITY throws Museveni out, they will go for independent tribal states & each will become real 'nation' running it's affairs!

Algerians' UNITY without common national leadership left empty space without a candidate coming forward to run as next leader! This means those who worked with Boutefika will go on ruling, the people will continue coming out to demonstrate asking them to leave!

Ugandans didn't want to UNITE around Dr Besigye, don't want to do so with mp Bobi Wine, but they can go streight for independent tribal states!
Report to administrator