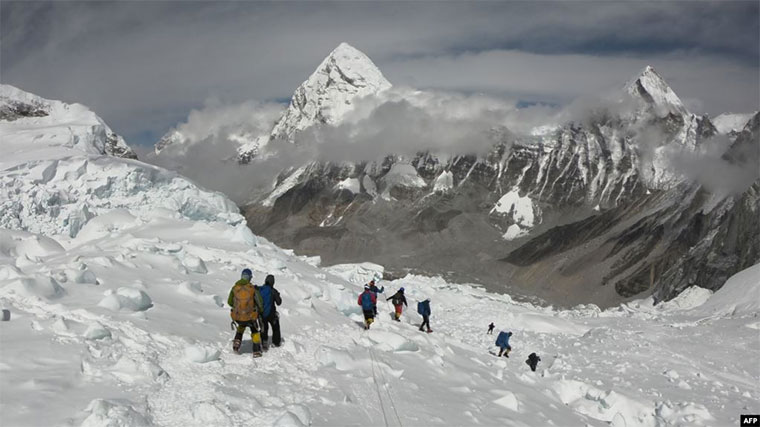 FILE - Mountaineers walk near Camp One of Mount Everest, April 29, 2018, as they prepare to ascend on the south face from Nepal

Three more climbers have died on Mount Everest, expedition organizers and officials said Friday, taking the toll from a deadly week on the overcrowded world's highest peak to seven.

Kalpana Das, 52, reached the summit but died Thursday afternoon while descending, as a huge number of climbers queued near the top of Mount Everest. Another Indian climber, 27-year-old Nihal Bagwan, also died on his way back from the summit.

"He was stuck in the traffic for more than 12 hours and was exhausted. Sherpa guides carried him down to Camp 4 but he breathed his last there," said Keshav Paudel of Peak Promotion.

Mountaineering in Nepal has become a lucrative business since Edmund Hillary and Tenzing Norgay made the first ascent of Everest in 1953. The Himalayan nation has issued a record 381 permits costing $11,000 each for this year's spring climbing season, triggering bottlenecks en route to the summit after poor weather cut down the number of climbing days.

Most Everest hopefuls are escorted by a Nepali guide, meaning more than 750 climbers were expected to tread the same path to the top in the current season. At least 140 others have been granted permits to scale Everest from the northern flank in Tibet, according to expedition operators. This could take the total past last year's record of 807 people reaching the summit.

Many Himalayan mountains, including Everest, are at peak climbing season, with the window of good weather between late April and the end of May. At seven other climbers have died on other 8,000-meter Himalayan peaks this season, while two are missing.

0 #1 kabayekka 2019-05-24 20:25
Nepal is busy making money without minding the lives of these mountain tourists. It is unfortunate indeed.

This sends a warning to the East African countries that are bent on making lots of money from the great mountains and volcanoes that exist in the famous African Rift Valley of about 2000 miles long.
Report to administrator
0 #2 kabayekka 2019-05-24 20:29
One understands that Tanzania has already bought over 5 aeroplanes to meet the demand for travel across the large African continent.

But one doubts whether amenities such as modern hospitals are available.
Report to administrator
0 #3 Lakwena 2019-05-25 09:03
Human being can really act stupid. Otherwise, what are all these deaths for?

In other words, at this rate, the Himalaya alias Everest mountain mus but be a haunted place.

Think of it: even though they have 20 times the ability to climb the Everest, and because of the danger, animals just don't do.

Just because someone or everybody does, but is it worth the risk and the heartbreak to the loved ones?
Report to administrator