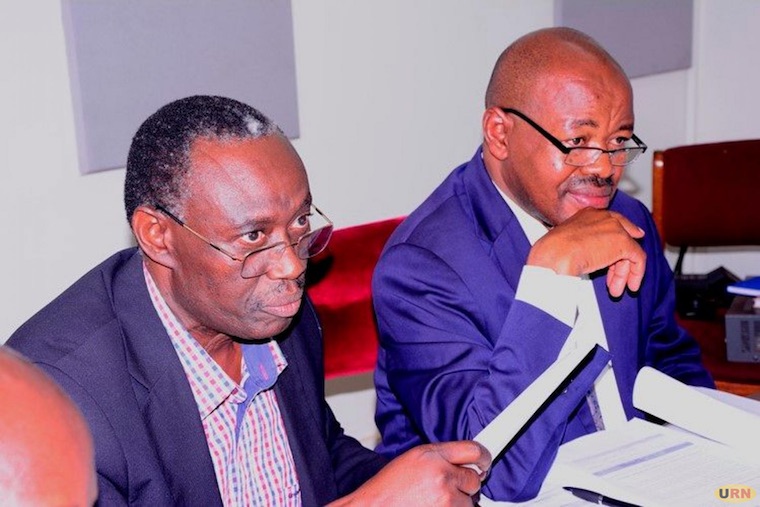 Parliament’s Budget Committee on Wednesday encountered difficulties in finalising the FY 2019/20 budget after discovering inconsistencies in figures presented by the ministry of Finance.

Chaired by Ntenjeru North MP Amos Lugoloobi, the Budget Committee convened to scrutinize the additional Shs 929 billion in allocations presented by government on Tuesday to the already scrutinized Shs 39.54 trillion national budget for the next financial year.

As the committee interfaced with the state minister for Finance in-charge of planning David Bahati, a fresh document defending the additional resources was presented indicating more funds totalling Shs 934.4 billion contrary to the Shs 929 billion figure officially tabled before parliament. Bahati appeared before the committee together with ministry of Finance's director budget Kenneth Mugambe.

With parliament racing to beat the deadline for appropriation of the 2019/2020 financial year budget by 31st May according to the Public Finance and Management Act, 2015 (PFMA), Lugoloobi tasked Bahati on the changes.

Butambala County MP Muwanga Kivumbi and Kachumbala County MP Patrick Isiagi said that the changes in figures formally tabled before parliament and those availed to the committee was an illegality, demanding that the fresh document is thrown out or the committee seeks guidance from the House.

Nakasongola Woman MP, Margaret Komuhangi asked Bahati whether he was attempting to amend the additional budget (corrigenda) before the committee saying that it could only be amended before parliament. Bahati acknowledged the changes in the figures appealing to the legislators to consider the changes made by his ministry also indicating that the same changes where to be formally tabled before parliament.

Bahati partly attributed the changes in the figures to alterations made in the Education sector budget.

"The corrigenda which we raised in the House yesterday, there is an allocation of Shs 49bn for salary enhancement for science teachers arising out of distortions for the implementation of Phase I of 2018/19. Under the original corrigenda, Shs 49bn was provided under the headquarters of ministry of Education, but this money is meant for various votes in the Local Governments. So if this money remained under ministry of Education headquarters, it would mean that people will either do a supplementary to effect this, or the ministry will pay part of the money they have and then another payroll is prepared under ministry of Education to pay people under the Local Government which I think is not worth it." said Bahati.

Bahati further noted a new provision of Shs 9.8 billion, an increment to the Agriculture sector external financing regarding the second phase of the Vegetable Oil Development Project (VODP).

He explained that the funding for the project was confirmed after the submission of the budget draft estimates to parliament. Tasked by the committee on the source of funding of the additional budget, Bahati said that the increase in the budget from the earlier presented Shs 39.54 trillion to Shs 40.48 trillion is to be funded by additional borrowing from the domestic market of Shs 502.63 billion and the increase in Non-Tax Revenue provision of Shs 108.84 billion. The minister also cited external financing of 9.89 billion.

“The budget has also increased by Shs 317 billion on account of an increase in interest rates and Shs 54 billion to service domestic interest payments and Shs 263 billion redemption costs,” said Bahati.

Lugoloobi revealed that his committee had noted differences in budgets for different sectors with the soft copy of the Appropriation Bill indicating higher figures representing a difference of over Shs 200 billion above those provided in a physical (hard) copy.

Bahati appealed for more time to allow Finance Ministry’s technical team to harmonize the figures with parliament’s technical team. But even after the required 30 minutes by the minister, he could not readily offer an explanation to the discrepancies saying that his team was still locked up to identify the cause of the differences.

This smacks of either incompetence, corruption or orders from above in preparation for 2021.

In Uganda anything is possible. Bahati you are a blunder to this country. I don't know how much of efficiency will be left in you at the age of 75?

I think Museveni is right after all to do away with the age limit because if young ministers like the Bahatis and Kibule don't add up what can the old man with the hat do?
Report to administrator