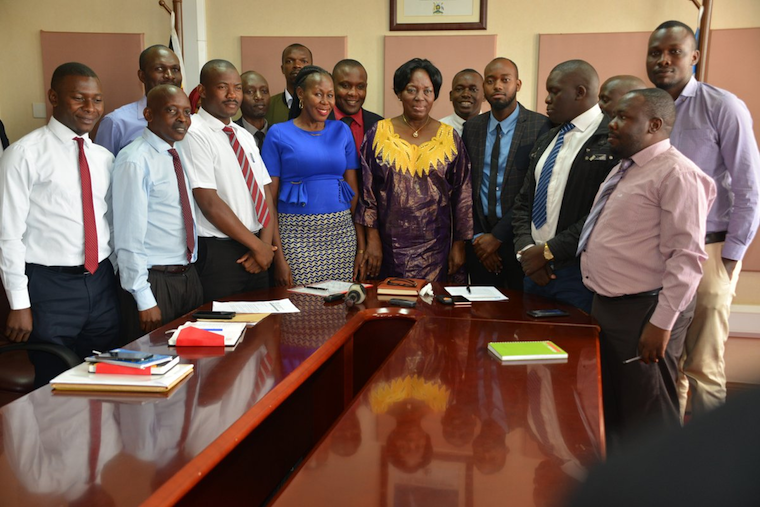 The journalists in a group photo with speaker Rebecca Kadaga

Journalists working at parliament have requested the speaker of parliament to consider paying them a monthly allowance like it's done in other countries.
At least 265 journalists from various media houses across the country are accredited to cover the tenth parliament. The journalists made the request through the Uganda Parliamentary Press Association (UPPA) president, Moses Mulondo.
Mulondo made the request during a courtesy call to the speaker Rebecca Kadaga following her return from sick leave last week. Mulondo urged Kadaga in her capacity as the chairperson of the parliamentary commission, to consider paying journalists a monthly allowance. He says the top up contribution to journalists will improve their welfare of journalists since they earn little pay.
"There are some parliaments we have had like EALA and the Kenyan parliament that give some allowances to journalists who cover them. We’re aware that the police officers here at parliament who are not staff of parliament you give them top up allowances because of the work that they do for you. Our members believe parliament can give journalists who cover parliament a top up allowance to supplement the meager salaries that they are given." Mulondo said.

Mulondo also said that since the UPPA Sacco has been successfully registered, it could it could help improve welfare of the journalists if parliament makes an annual contribution. He also suggested that journalists can conduct research on public opinions that can inform parliament into making decisions that are public centered.

Kadaga promised to research about how some governments especially in Scandinavian countries fund the media industry and sell the idea to the parliamentary commission.

"I need to study the Scandinavian model to see how it works, government supports the media sector but I think what we can do as part of CSR we can do it as parliament because sometimes we support rotary with this and that. I think I'm going to discuss it with the commission so that we see an entry point. If we are able to do other things for people who are not at parliament, what about you? Just give me three months..." said Kadaga.

Peter Ogwang, a member of the commission supported the proposal to pay monthly allowances to parliamentary journalists, saying it should be budgeted for. Ogwang heads the finance and planning committee of the parliamentary commission. The commission has lately faced public backlash for increasing MPs salaries by 39 per cent as well as paying Shs 200/day social media tax and Shs 30,000/month data bundle for the 458 members of parliament.

How can they be impartial and still report REAL NEWS? Unless of course they want to start reporting FALSE NEWS. Uganda is doomed!
Report to administrator
0 #12 kibedi nkuutu 2019-05-21 13:27
The very people who are always writing about the plight and corruption in parliament are now JOINING the pack!!!

Well, as the man said, "If you cannot beat them, join them". These journalists have actually done that.

Whom shall we trust now? More so, to whom will these journalists turn to in case of problems? The public? Or the parliament? We are doomed....this is a sell-out, simple and pure.
Report to administrator
12