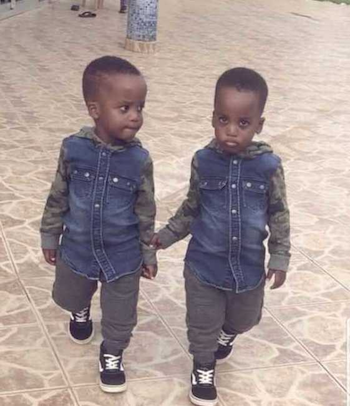 RIP: The two boys who drowned

The state minister for Water and Environment, also Mukono North MP, Ronald Kibuule has lost his twin boys after they drowned in a family swimming pool in Mbalala, Mukono.

The two boys reportedly aged two years are said to have gone missing for a few hours on Monday evening before they were discovered in a swimming pool at their home yard.

The two boys were quickly taken to Sir Albert General Clinic at Kikooza in Mukono for examination. Clinic administrator Steven Kaate says by the time they reached the center at around 6:30 pm, they had already passed away.

The dead bodies were taken to Mulago hospital Kampala for a postmortem.

I am not being callous, but as a matter of caution to those who adopt alien lifestyle without justification; a swimming pool at home, is as deadly as the gun at home.
Report to administrator
0 #2 Webz 2019-05-14 08:25
Oh, dear! May the souls of the innocent toddlers rest in peace.

Meanwhile many a people endanger their own lives by owning hazards in their compounds. Often times I read that some own lions, pumas, leopards, crocodiles in their homes.

Just by a slight mistake the owners end up mauled by these animals. It's equally dangerous to own a lake in one's compound. Quite bizarre.
Report to administrator
+4 #3 kabayekka 2019-05-14 09:13
You have very young children. They watch Dad and Mum fall and swim in the pool anyhow.

For health and safety, there is nothing. What happens, the kids discuss. The murder trap is open and in they fall.

The State must make out a case in the courts of law against the parents for Neglect and manslaughter of the highest order!
Report to administrator
+1 #4 Besmeth 2019-05-14 15:47
What a pity! I feel for you Kibuule! Its an unimaginable loss to you. Jehovah will raise them in future. Endure for now
Report to administrator
-1 #5 rubangakene 2019-05-14 21:42
Totally unforgivable! What does this tell you about the calibre of some of our politicians; they could be holding many degrees and other qualifications.

When they decided to have a swimming pool, what risk-assessment did they take in ensuring this tragedy never took place?

Sitting there in cabinet meetings, they could be endangering the whole population if they can't see beyond their "nose and greed".

I am annoyed and really pissed off they could have even been watching football on TV with all their friends and house girls. Arrest and charge them accordingly!
Report to administrator
0 #6 Kirya 2019-05-14 22:55
The honorable should face charges for failure to elect a fence around the pool
Report to administrator