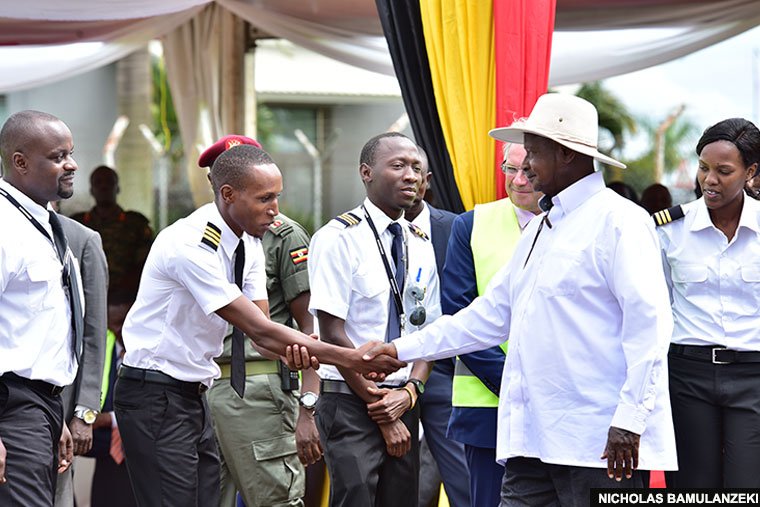 President Museveni greeting some of the budding pilots at Entebbe

President Museveni has confessed to being one of the people who buried the old Uganda Airlines more than 20 years ago. All its assets including five aircraft left behind by former President Idi Amin’s government were disposed of.

The two planes are part of a six-aeroplane fleet planned for a revived Uganda Airlines expected to start operations in July.

“I was among the people who buried the old airline but here I’m among the midwives delivering a new baby,” Museveni said.

For it to be profitable in the face of cutthroat competition from established regional and international airlines, Museveni said the new Uganda Airlines should target four major constituencies.

These are; Ugandans in the diaspora, Asian-Ugandans who were expelled by Idi Amin in the 1970s, Ugandan businesspeople and tourists.

“Sometimes bad things create good things. During Amin’s time, very many Ugandans ran away because of insecurity and when they got where they went, they established themselves and they always want to come back. So, you should establish their exact figures. That diaspora in North America, UK and Southern Africa is big but find out how big it is because they are always travelling,” Museveni said.

He added that tourists who come to Uganda are always inconvenienced by several stopovers in different capitals like Nairobi, Addis Ababa and Kigali.

He said the country will save in the excess of $400 million in foreign exchange which Ugandans travelling outside pay for their trips. Monica Azuba Ntege, the minister of Works and Transport, said the problem of Ugandans paying high prices for travel has finally been solved.

“Ugandans have depended on foreign airlines but they have unreasonably high tariffs and unfair services. It’s the beginning of a new era where Ugandans will get the air services they need and deserve,” Azuba said.

She, however, admitted that building an airline is no simple task. She said the road ahead is very challenging. But she was quick to add that as government, they have got a clear sense of direction to make sure that the problems, which forced other airlines to close shop, don’t reoccur.

“Ugandans are happy and excited about the revival of Uganda Airlines... the new airline is yours and it’s for you, government has invested heavily so that it can serve your needs; take advantage of it and patronise it as your airline of choice, then it will be able to sustain high-quality services,” Azuba said.

12
+1 #11 Davidgenerationz 2019-04-24 11:16
Sir, Mr.President,Yes you buried the former and now u r resurrecting new Uganda airlines,no wonder nothing was written about Lazarus after his ressurection.

All that rumour that this is your own personal project should be cleared.I also hate this arrogance Mr. President u r trading everywhere,The "ME" syndrome.

If you and the group has bought this country,I beg just inform us and we settle down, than stressing ourselves everyday.
Report to administrator
+1 #12 Louise 2019-04-24 11:33
First of all, who owns Uganda Airlines? We need to see details of the ownership structure

Secondly, these planes are smaller than those owned by, say, Ryan air jets which fly between cities in Europe so i dont suppose these specific ones will fly further than Ethiopia.

Thirdly, Ugandans need a serious psychiatrist: Someone comes, takes away or buries 12 of your prized possessions a process which only benefits his family, relatives and in-laws, then after many years begins to give them back one by one under unclear terms of ownership meant benefit again mostly him and close family, and what do we do?

We say thank you and get excited about it. Cry the beloved country!!
Report to administrator
+1 #13 kabayekka 2019-04-24 12:38
Interesting African leadership indeed. How can one bury a modern business of travel that gives service to the people of that country every day?

Are you soon going to bury MTN? Or the UPDF since they are not profitable enough?

When this government devalued the Uganda shilling this leadership said that the Uganda shilling was eaten up with cancer of the pancreas and that cancer was taken out by the surgeons of Mulago Hospital!
Report to administrator
+1 #14 Lakwena 2019-04-24 16:11
What a disgrace! Murdering Uganda Airline and burying it, destroyed the livelihood and buried a spiraling number of Ugandans lives.

In other words, here we are: a friendless, faithless heartless and loveless Mr. M7; shamelessly, mocking and bragging how he succeeded in destroying Uganda without any a challenge.

I am sure he is waiting for the day he will also say "I buried old Uganda Railways". It is sickening.
Report to administrator
+1 #15 rubangakene 2019-04-24 22:35
Although the "burying issue" is shocking, no need to dwell on it!

An airline is a very delicate business that needs brains, good planning and capital investments, you can't compare it with bananas.

Maintenance will be outsourced; that means every week the aeroplanes will be back in Canada for a simple routine 50hour-check, how much fuel with that cost.

You need a hangar, workshops, technical stores and qualified personnel and so on. It is shocking to say we will save $400 dollars when a tyre unit alone might be about $16,000 dollars or indeed 20 billion bananas!

Kenya Airways who have all the maintenance facilities and the technical know-how are losing money as we speak. Let's wait for the first 30 days of honeymoon before we brag all these nonsense!
Report to administrator
0 #16 rubangakene 2019-04-25 22:07
Meanwhile, "I buried Uganda Airlines..." is a very disturbing utterance. These are the words of "executioner and undertaker" resembling a dialogue in a "cowboy film" in America, not from our 'respectable' president.

Uganda Airlines was buried in Rome when over fifty souls perished in a crash that was avoidable.

The report on- line suggests that a radio equipment wasn't working; the CAA should now take this into account when they begin the process of awarding the "new baby" with an operator's certificate.

They have to independent in scrutinising this entity without interference from the politicians!
Report to administrator
12