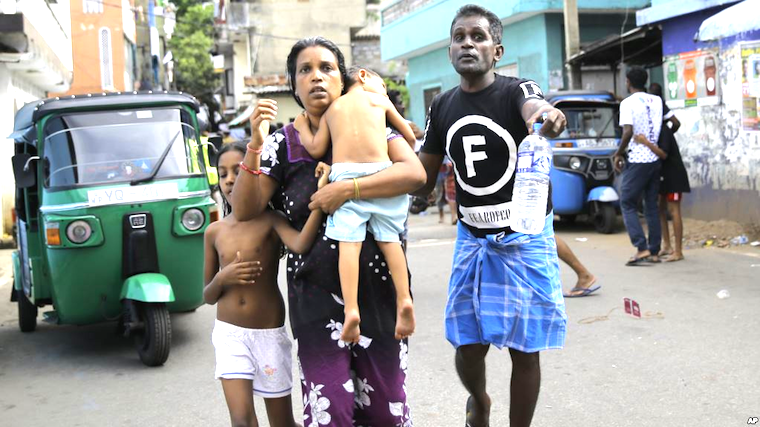 In the deadliest violence in Sri Lanka in a decade, multiple explosions ripped through churches and luxury hotels on Easter Sunday, leaving 290 dead. Five hundred people were wounded in the blasts.

The first six blasts, which began around 8:45 a.m. local time, were coordinated and claimed most of the fatalities, while two smaller blasts took place several hours later. The targets of the bombings were tourists and Catholic worshippers attending Easter prayers at churches in three cities.

Later officials said an improvised explosive device was defused near Colombo's main airport. ​The blasts shocked the island nation, which has been relatively peaceful since a bloody civil war ended 10 years ago.

Thirteen people have been arrested in connection with the attacks, for which no one has claimed responsibility. Sri Lanka Prime Minister Ranil Wickremesinghe admitted to reporters Sunday that the government had known about the possibility of the attacks.

"The information was there," he said, but he could not say "why adequate precautions were not taken."

The capital Colombo, where three major hotels and one church were targeted, bore the brunt of the mayhem. Ambulances wailed through its streets and hundreds of people turned out to donate blood as the injured were rushed to hospital. Thousands of police were posted in the streets while the army stood guard outside state buildings.

The two other churches to suffer the attacks were in Negombo, a Catholic-majority town just north of Colombo, and in the eastern district of Batticaloa.

The Gothic-style St. Sebastian’s church in Negombo appeared to have taken the worst hit. Photos posted on Facebook by church authorities, who issued appeals for help in the aftermath of the bombing, showed a shattered roof, blood-stained pews and bodies on the floor. Witnesses said they saw smoke billowing out of the targeted churches.

The blasts in the afternoon took place at a small hotel close to the national zoo near Colombo and another at a house in the capital city.

About 30 foreigners, including Americans, British, Indian, Turkish, Japanese, Chinese and Portuguese nationals, were among those dead and injured in the attacks. Located in the Indian Ocean on India’s southern tip, Sri Lanka’s sandy, tropical beaches are a popular tourist destination in South Asia. The hotels hit were the Shangri La, Cinnamon Grand and Kingsbury hotel.

"Horrible scenes, I saw many body parts strewn all over," Sri Lanka Minister of Economic Reforms Harsha de Silva said after visiting a church and a hotel in Colombo.

Police say they are investigating whether suicide bombers were involved in the attacks.

Authorities ordered a nighttime curfew Sunday, but lifted it Monday. Sri Lanka also blocked access to major social media and messaging sites, including Facebook and WhatsApp, in a bid to stem the flow of "misinformation and rumors."

Schools have been closed until Tuesday and police were advising people to stay indoors. As rumors about the possibility of more attacks spread rapidly, Prime Minister Ranil Wickremesinghe appealed to people to stay "united and strong."

Condemning the "cowardly" attacks, he said in a Twitter post, "Please avoid propagating unverified reports and speculation. The government is taking immediate steps to contain this situation."

Statements of condemnation came in from top officials. Minister of Finance Mangala Samaraweera said the blasts appeared to be a "well-coordinated attempt to create murder, mayhem and anarchy."

President Maithripala Sirisena said he has ordered a special police task force and the military to investigate who was behind the attacks and their agenda. Christians make up about 7.5% of the mostly Buddhist nation of 21 million.

Sri Lanka witnessed nearly a quarter-century of violence, bombings and terror attacks that often hit high-profile targets during a bloody civil war led by Tamil guerrillas for an independent homeland for the ethnic community, but the insurgency was crushed in 2009.

Since then, the tiny country has witnessed some political instability and sporadic incidents of religious and ethnic violence, but no violence of the kind that shattered its calm on Sunday.

Christian groups have said they face increasing intimidation from hard-line Buddhist monks in recent years. Such harassment, however, is on a relatively minor level, says Jehan Perera, who heads the National Peace Council of Sri Lanka, in Colombo.

Pointing out that churches were hit, he asked, "Who would target Catholics? There has been anti-Christian sentiment, but on a very small scale with regard to conversions that are happening in different localities but not to the extent that people would be killed. Sometimes there were stones thrown, sometimes a pastor were chased away, but not massive bloodletting."

Condemnation of the deadly bombings poured in from leaders across the world. The head of Sri Lanka’s largest neighbor, Indian Prime Minister Narendra Modi, said, "There is no place for such barbarism in our region."

A spokesman for U.N. Secretary-General Antonio Guterres said the U.N. leader is "outraged by the terrorist attacks" on "a sacred day for Christians around the world."

Pope Francis condemned the attacks during his Easter Sunday address in Rome and offered condolences to "the victims of such cruel violence."

In an interview to a local television network, Colombo’s Archbishop, Malcolm Ranjith, called on people to remain calm. He has also asked authorities to conduct an impartial inquiry and to punish those responsible "mercilessly" because "only animals can behave like that.''

0 #1 Jonathan Luyirika 2019-04-22 21:30
My heart goes out to the families of these who died in blasts and I wish quick recovery to these who got injuries in blasts.

There is a special place in hell for those who are responsible for blasts.
Report to administrator
0 #2 Lakwena 2019-04-23 09:18
In other words, this cannot be an act of religion, but an act of savagery and barbarism, void of religious values.

Down with the perpetrators of terrorism who are consumed by blind hatred of peace-loving people.
Report to administrator