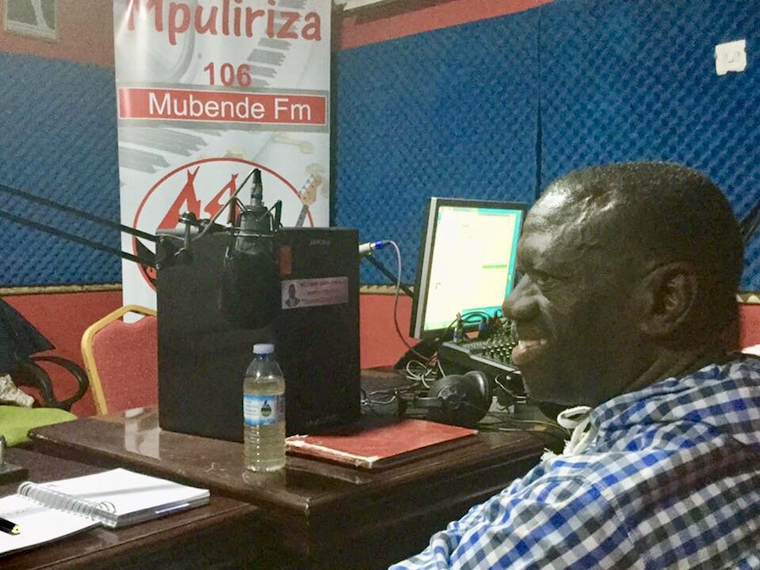 Kizza Besigye in the studios before the arrest

Scores of people were arrested and several others injured Thursday afternoon in running battles between security and supporters of Dr Kizza Besigye at Pride Traveler’s hotel, which hosts Mubende FM.

Trouble started after a joint security group composed of police and the army, turned off Mubende FM where Besigye was appearing on a political talk show dubbed “Agali Awamu”. Yusuf Kato Kibalama, the host says the radio went off just ten minutes into the talk show. He says minutes later, security officers surrounded the radio station prompting management to lock the premises.

The officers tried to gain access to the studios where Besigye was locked up in vain because of the biometrics door lock system. As a result, Besigye’s supporters mobilized themselves and pitched camp outside the station building and cheered on the four-time presidential candidate.

Kibalama said after fidgeting for about two hours, police officers led by Mubende district police commander, Martin Okoyo managed to break into the studio. Okoyo ordered Besigye to come out and thereafter escorted him to a waiting police van parked inside the hotel premises.

A group of FDC leaders led by their party president, Patrick Amuriat Oboi used their vehicles to block the hotel entrance to deny the police van exit. This prompted police to bring a fire brigade truck to knock out of the way the FDC leader’s vehicles, damaging some of them in the process.

Shortly after opening the gate, the charged FDC supporters and leaders demanded Besigye’s release prompting police to fire tear gas and live bullets to disperse them. Some of the FDC supporters sustained injuries while others were picked up and driven to Mubende central police station together with Besigye.

Harold Kaija, the FDC party deputy secretary general, says they are still wondering why government is acting in a barbaric manner days after addressing the issue of political space in the inter-Party Organisation for Dialogue (IPOD).

”It is an indication that impunity still goes on in this country. They keep shouting saying the opposition is not organized, it does not have structures. But again, they don’t allow you [to organise]. It’s a game that Mr Museveni wants to play to keep around. Actually I have been writing in one of the platforms of IPOD, that it seems the NRM-IPOD team reads from a different script from Mr Museveni. Just on the 25th of this month, there is supposed to be a kind of conference about the Public Order Management Act (POMA) with the prime minister accepting attendance to bring the IGP and other things to talk about it.” said Kaija.

As early as Wednesday night, a combined team of Uganda People’s Defense Forces (UPDF) and police officers were seen patrolling the streets of Mubende town. Alfred Kamya, a resident of Mubende, says from morning, the situation looked 'awkward' and at some streets movement was limited.

“We never knew what was happening but when we heard that Besigye was appearing on a political talk show on 106 Mubende FM, we tuned in but the [later] radio went off.” Kamya said.

Security had reportedly mounted three roadblocks along Mityana road in Busega and Matugga to block Besigye's movements because they hoped that he could go through Wakiso and Bulenga. They also deployed men outside Mubende FM premises since Wednesday night and were 'shocked' to hear Besigye was already in the studio.

Wamala region police spokesperson, Norbert Ochom declined to divulge details about the operation, only saying there was no chaos in the municipality and that Besigye wasn’t under arrest.

Before his arrest, Besigye earlier told URN on phone that he has embarked on a campaign to traverse several parts of the country to demystify the lies of President Yoweri Museveni which he said has blindfolded Ugandans for the last three decades.

Besigye says government is aware that he has critical information and has decided gag him from communicating to Ugandans - more so to those outside Kampala that the ruling party claims to have massive support.

In September 2017, Besigye was blocked from entering Voice of Kigezi to conduct a live show on land matters. The radio management argued that they had been directed by the resident district commissioner not to allow him to appear on the airwaves.

In July 2015, the MP for Jinja Municipality West who also doubles as NRM chairman for the district, Moses Balyeku ordered staff at his Baba FM to switch off the radio station which had started to transmit a live talk show where Besigye had gone to feature as a guest.

In November 2009, Besigye was blocked from appearing on Nenah FM in Karamoja to address the public. In May 2007, the Kitgum-based Kitti FM was switched off air 30 minutes after Besigye had started speaking on the radio’s talk-show. The radio’s generator was switched off, reportedly on the orders of the then area RDC.

+2 #1 Jonathan Luyirika 2019-04-19 13:30
Where did police and RDC derive the power to shut down a privately owned radio which does fall under their jurisdiction ?

That was the question I asked myself several times and I couldn't figure out what the answer was.

Where did police and RDC derive the power to shut down a privately owned radio which does fall under their jurisdiction ?

That was the question I asked myself several times and I couldn't figure out what the answer was.

Your question s valid BUT unanswerable. The other question is WHY in Mbende? That is answerable: Mbende is not not Kampala.
Report to administrator
0 #3 Akot 2019-04-21 19:24
Jonathan Luyirika, agreed, but,

The entire country fiormed by tribal lands, yet ruled tribalistically by Musevnei who has no tribal land in it, belong to him & no other; he controls every institution & owns tax money!

Uganda is Museveni, Museveni is Uganda & this will be so until our people decide otherwise in UNITY!

Where did UNITY of a people leave Al Bashir, Boutefika who never believed they would leave their posts?

Will UNITY that will force Museveni out leave Ugandans landless because the demon will throw them out of the country?
Report to administrator
0 #4 PaulK 2019-04-22 09:15
M7 will fight tooth and nail to ensure that villagers are kept in the dark.

This enables him to rig in these areas as there is lack of a critical mass to protect the vote. They should consider getting a mobile FM transmitter
Report to administrator