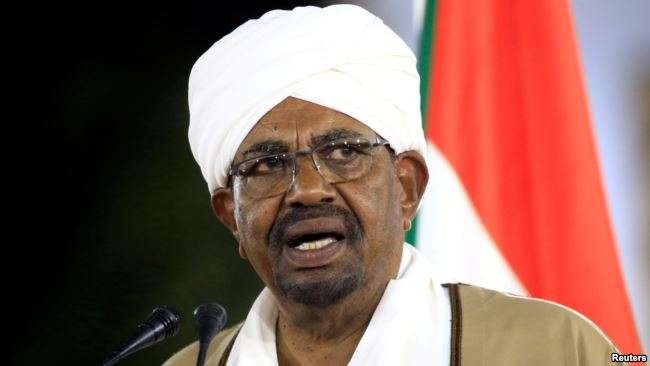 Sudan's military rulers said Wednesday that two brothers of ousted President Omar al-Bashir have been arrested as part of a continuing campaign of arrests against "symbols of the previous regime."

A spokesman for the Transitional Military Council also said that irregular forces linked to Bashir's former ruling party have been brought under the army or police control.

Bashir himself is reportedly being held at a maximum-security prison, after initially being put under house arrest. Unnamed members of Bashir’s family told Reuters news agency, the BBC, and others he was moved to Kobar prison in Khartoum late Tuesday, while prison guards told CNN they saw Bashir’s arrival at the facility.

Kobar prison is where Bashir locked up many of his opponents during his three decades in power. But some of the thousands of protesters remaining camped outside the Defense Ministry since last Thursday’s coup are skeptical.

Protestor Abubakr Ali said there should be proof that the former president was arrested. He said he doesn’t believe that Bashir is in prison and, even if he is in prison, they want a trial for Bashir and his people.

The Sudanese Professional Association, the main protest group, also voiced doubts. Mohamed Abbas is with the SPA. He said the news remains unconfirmed unless the military council announces it in a press conference. People in the streets and the sit-in are demanding to see photos of the arrest on national TV as well, adds Abbas.

A well-placed source told VOA Wednesday the reports of Bashir’s move to the prison were not true and that he was still being held under house arrest.

The African Union on Monday threatened to freeze Sudan’s membership if they do not return civilian rule within two weeks. The European Union echoed that sentiment on Tuesday, refusing to recognize Sudan’s military council and urging a civilian transitional government.

But not all protest groups are demanding the military be sidelined. Sudan’s Gathering of Unionists in Opposition party said it would happy if the military council simply included civilians.

Hashim Babiker, a spokesman for the party, said their vision is to form a presidential council with civilians but, they don’t mind the military representation as well to protect the demands of the revolution.

The SPA called for bigger protests in Sudan starting Thursday, until the military council hands over power to an elected and qualified civilian government. Sudan’s protests erupted in December over fuel and food shortages then quickly escalated to massive street protests calling for Bashir to step down.

Uganda says it will consider giving asylum to Bashir, who was deposed by his country's military last week.

"If President Omar Bashir applies for asylum in Uganda, that is a matter that can be considered by the president of Uganda," Okello Oryem, Uganda's state minister for foreign affairs, said Tuesday.

Oryem, speaking Wednesday to VOA, added that Uganda will not be apologetic if Bashir chooses to come to the country. He also said Uganda does not recognize the International Criminal Court, or ICC, which in 2009 issued a warrant for Bashir's arrest on charges of war crimes, crimes against humanity and genocide in Sudan's Darfur region.

The head of the International Center for Transitional Justice in Uganda, Sarah Kasande, says Oryem's statement is an insult to Bashir's victims. Kasande noted that Uganda ratified the Rome Statute which established the ICC, and says Uganda is legally obliged to arrest and surrender Bashir, should he enter the country.

But she stresses the 1951 Refugee Convention, which Uganda also signed, does not allow Bashir to enter that country.

If anything, Kasande believes Uganda should prosecute Bashir, who it once accused of backing Lord's Resistance Army Rebel leader Joseph Kony. The LRA killed tens of thousands of people in northern Uganda before moving westward into Congo.

"They still have an obligation to prosecute him. How and whether they will do that is another matter," Kasande said. "But either way, he should face justice. But also, I find it quite disturbing that Uganda would dangle asylum to Bashir. He has not asked for asylum from Uganda. It is upon the people of Sudan to determine what happens to the fate of their ex-dictator."

Gen Salim Saleh, Benz, Toyota and the Suzuki members of Mr. M7's family should prepare to cut and run, or risk smelling the cells in Nalufenya, Luzira and/or Butabika.
Report to administrator
0 #2 rubangakene 2019-04-18 21:19
The Lord really DOES move in a mysterious way.

Who would have thought, eh, that this man who used to call the Darfur people "kebil" or dog, is now languishing in a dog's cell surrounded by his family while the Sudanese people are slaughtering cattle, sheep and goats to feast on and begin to sleep peacefully.
Report to administrator
0 #3 Jonathan Luyirika 2019-04-18 22:10
Bashir, the demon is lucky than his former friends in crime namely Osama Bin Laden (Bashir's former neighbor in Khartoum) and the late Libyian dictator)who went home.

Military men in Sudan decided to treat him well by sending him to Kobar prison where once Bashir imprisoned his opponents.

He is going to eat well at expenses of tax payers...,the same people Bashir and cronies had been torturing and oppressing for three decades.
Report to administrator
+1 #4 Omuzira Ente 2019-04-18 22:47
whose interest does African Union (AU) serve?. how come they are telling the military in Sudan to handover power to civilians simply because one of them is ousted forgetting that most African Dictators who have keep this continent behind are military rulers.

Where were they for 30 years not to tell Gen Bashir to handover power to civilians?. The poor Africans would loose nothing if this club of dictators collapsed yesterday. ECOWAS in Western Africa is the only organised group on African continent that is concerned about the people.

AU is useless if it can not restore democracy on African continent. There is no single effort to bring peace to Libya or Somalia only waiting for US to give them money only to guard the capital mogadishu other than engaging all the worrying groups to agree to disagree and share iterator to leave in peace.

The African Bank is just looking on as China is mortgaging African countries. It only looks on when world bank polices force youth into unemployment.
Report to administrator
+1 #5 Abalang 2019-04-19 08:49
Great to see the AU standing by the civilians. A bit of history though: When Sudan was under Bashir's dictatorship, the AU protected him from the arrest.

Quoting the Malawi president to Al Jazeera, "There is a general concern in Africa that the issuance of a warrant of arrest for... al-Bashir, a duly elected president, is a violation of the principles of sovereignty guaranteed under the United Nations and under the African Union charter,"

They then went ahead to issue a statement that: "[The AU] reiterates its decision that AU member states shall not co-operate with the ICC in the arrest and surrender of President Bashir".

Now, they are not demanding for the release and reinstatement of the duly elected president, but for the transition of government to civilian rule. Will they soon allow for his transmittal to the Hague?
Report to administrator