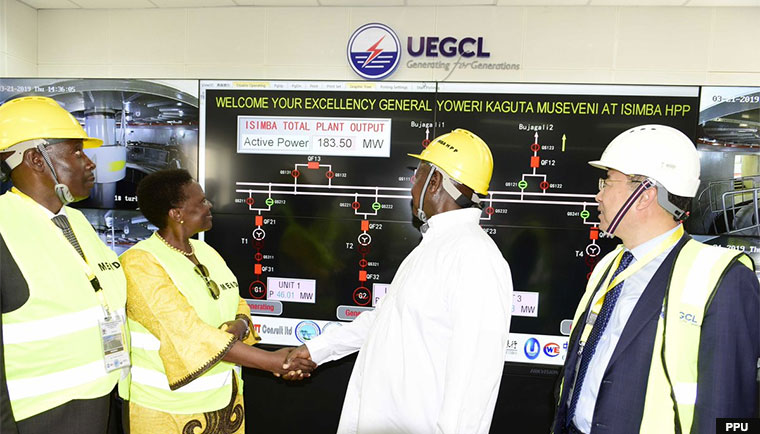 President Yoweri Museveni has hailed the government of China for being a 'reliable development partner' for Uganda in particular, and Africa as whole. Museveni said this while commissioning the 183MW Isimba hydro-electric power plant in Kayunga district yesterday. Museveni switched on the four turbines of the 183MW dam amidst cheers from high profile dignitaries from both countries who accompanied him.

He said that the financial and technical support that Uganda has received from the China during the building of the power plant and many other development projects in the country, goes a long way to distinguish China as a genuine and committed development partner.

After switching on the plant at Nampanyi village in Busana sub-county in Ntenjeru North county, Museveni further commended China for extending to Uganda a concessional loan of $481 million through Exim bank of China towards the construction of the power dam. Construction of the dam cost $566 million (about Shs 2 trillion).

The Exim bank loan funded 85 per cent of the construction works while Uganda paid 15 per cent of the total project cost. China International Water and Electricity Corporation (CWE) undertook the construction works and completed it in 47 months. Isimba is now the 3rd largest power plant in the country, and has helped to increase power generation in Uganda to 1,167MW up from the previous 984MW.

Museveni said by China availing soft and non-conditional development loans to Uganda, it has enabled government to simultaneously handle several projects such as the Isimba and Karuma power plants, the construction of the Kampala-Entebbe express highway and the expansion of Entebbe international airport, among others. Museveni said government will again consider China for the construction of the standard gauge railway.

He added; “After guaranteeing peace in the country, introducing free education, carrying out mass immunisation and investing in the health sector, the government thereafter devoted reasonable resources to the road and power sectors which has seen great improvement in the transport sector with the country having border to border tarmac roads.”

Museveni further observed that with the commissioning of Isimba and many other dams that are still under construction, Uganda will have cheap and sufficient power that will greatly support the country’s industrialisation agenda.

“The country is now getting enough electricity; the remaining challenge was the building of the standard gauge railway and availing cheap credit to crucial sectors of the economy is by re-capitalization of Uganda Development Bank,” he said.

He, therefore, appealed to residents of Kayunga especially and other Ugandans to make good use of the development infrastructure that government has put in place and work to get rid of household poverty that still remains the main challenge facing the country. Museveni also cautioned officials that delay or even block development projects and programs by demanding for dubious land compensations that their actions are un-patriotic and anti-development and will be punished.

“We have also constructed many roads and will continue to construct many more. But now our emphasis is on electricity. And very soon every part of the country will have electricity. We will also re-establish the old train transport system and construct a new one. Train transport is more cost effective compared to road transport,” Museveni said.

The minister for Energy and Mineral Development Irene Muloni said that the electricity generated from Isimba will be sold at US 4.16 cents per unit making it the cheapest in the country. She added that this power rate will run for the first 15 years after which it will reduce to US 4 cents.

The Chinese ambassador to Uganda, Zheng Zhuqiang said that China holds Uganda high as its development partner, the more reason that China continues to fund and support several development projects in the country.

He also expressed concern at the calculated negative publicity aimed at tarnishing the image of China and Chinese companies with regard to the nature of Chinese fiscal loans and employment policies of local labour force.

He reported that during the construction of the Isimba dam, the Chinese company employed 3,000 Ugandans who constituted 85 per cent of the total labour force, on top of training many Ugandans and equipping them with the skills to run the plant on their own.

Zhuqiang added that 70 per cent of the construction materials for the plant were locally procured. The 183MW Isimba Hydro Power Project (HPP) is located 4km downstream of Simba Falls on the River Nile, approximately 50km downstream of the Source of the Nile. The project site is about 21km from Kayunga town and about 65km from Jinja town.

The power station will be installed with four vertical Kaplan turbine generator units with a capacity of 45.8MW per unit thereby providing a combined installed capacity of 183.2MW.

-2 #1 Twebaze Francis 2019-03-22 18:36
Thank you President Museveni. You have taken a right step in the right direction by availing electricity which is a vital element for national development.

However, do not consider that as an excuse to hang on to power. Other Ugandans can also build dams and roads.
Report to administrator
0 #2 Ricardo de Oliveira 2019-03-25 14:03
Congratulations for Chinese Govt. and Ugandan Govt. and their peoples to making development possible and escaping colonial constraints and USA and EU false aids. Greetings from Brazil
Report to administrator