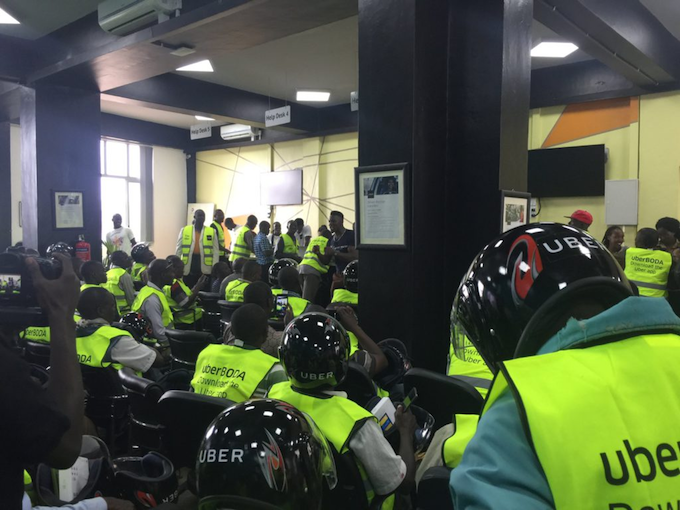 Uber drivers in a meeting previously

The Smart Online Driver's Association has petitioned the speaker of parliament over what they termed as unfair treatment and low fares by their parent companies.

The petitioners who offer special vehicle hire services under Uber and Taxify, accused the two companies of offering low fares to customers at the drivers' expense.

Musa Kawunga, the chairperson of the association says that although both Taxify and Uber started with a base fare of up to Shs 8,000 about two years ago, the figure has been lowered to Shs 4,000 yet the companies take up to 25 per cent of the pay as their share.

They are now demanding that the government takes over the regulation of the industry, to protect the special hire drivers from exploitation. According to the petitioners, those who have openly spoken against the unfairness have been blocked from using the app, which tantamount to throwing them out of business.

Workers MP Margaret Rwabushaija equally calls for the intervention of the government to ensure that the drivers' interests are safeguarded.

"The partners who are the investors in this case they are extortionists. They are taking so much when out of every Shs 4500 they are taking 25%, then what is the carry home? If am supposed to go home with a coin then how much do I take and I hope that the speaker will come up with a solution." said Rwabushaija.

Speaker of parliament Rebecca Kadaga says that parliament will take up the matter and establish whether using the applications forms a contractual obligation and engage the companies to improve the business.

I know you’d like to hold him responsible for the birds too but let’s be honest... Somethings are not his fault as poor as he has proved to be at his job.

Uber is the same platform, same company using the same model. So are u saying it’s not the same company in Ug? Do you know where it’s operational decisions are made? At HQ, not Ug.

All this to say, don’t try to push everything to fit the m7 is bad narrative. It reflects badly on your problem solving. Let’s have a real discussion on the issue at hand on the issue in the article.

Let’s not try change it to what we want. Is that too much to ask?? If the article relates to m7, fine let’s analyze the subject on its +/- but it it has no connection to him at all don’t force it to. That’s all I’m saying.
Report to administrator
12