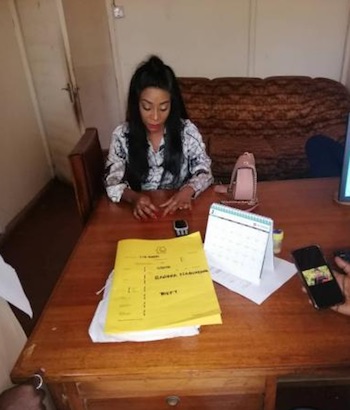 Bad Black arrived at the CID headquarters in Kibuli at 9am in the company of her lawyer Julius Galisonga. She was led to the Media Crimes Directorate office and questioned by two detectives about the video which she posted on social media in August 2018 at the time Kyadondo East member of parliament Robert Kyagulanyi alias Bobi Wine was held in military custody on charges of treason.

In the video in question, Bad Black while trying to explain that there is no way Bobi Wine could have stoned the president's vehicle, vulgarly abuses the president. In the video, she also claims that President had impregnated her and then forced her to abort. Bad Black now faces charges of offensive communication and criminal libel contrary to provisions of the Computer Misuse Act and Penal Code Act respectively.

During the 5-hour interrogation, Bad Black told the detectives that she had been paid to send out the video.

"They had paid me to defend Bobi Wine and abuse Museveni but I have since realized my mistakes and I won't do it again," she said even before entering the interrogation room.

Police spokesperson in charge of Criminal Investigations Vincent Sekate said Bad Black had been summoned to record a statement and was later released on police bond as investigations into the matter continue.

Bad Black is the third person to be investigated for offensive communication against the president in the last one year with the first being Dr Stella Nyanzi who is currently on remand at Luzira prison for vulgarly abusing the president's late mother Esteri Kokundeka in a poem published on social media.

The second was Susan Namata, a 21 year-old woman who allegedly used social media and threatened to hit the president with her genitals. She has since been released on bail.

+4 #1 Akot 2019-02-25 21:29
Museveni's police are the most useless brainless, uncultured, uneducated robots ever seen!
But of course they are programmed by & work for demon Museveni!

UNITY of Ugandans against Museveni is all that is needed to force him & his bandit police/army out!

Which tribal land will they retreat on to fight back?

Ugandans are not criminals, so don't need terrorist dressed in police uniform, more so these police is so stupid & don't know it's the people paying them they must work for & protect!

Just UNITY & Ugandans will be FREE of all this inhumanity Musevnei & his security terror forces inflict on them!
Report to administrator
+6 #2 Wooden K. 2019-02-25 22:17
Ladies & Gentlemen , this is Uganda !

A woman steals and destroys documents fron Bank of Uganda and lies about it on camera is given a car and body guards and a driver .

A deputy Attorney General of Uganda rebukes and insults a Judge on camera but walks home to his three wives .

An army General is recorded on camera varbly mishandling a woman traffic officer while his men hold choke her by the collar but drives off to his expensive mansion.

Yet , Dr. Nyanzi has been kept in jail and separated from her teen-age children for 3 months mbu because she "insulted" somebody`s mother.

Bad Black , a self-confessed vicious prostitute with a loose mouth and a blank-head is allocated time for a hearing because of what she might have said ?

What a shithole of a country !!!
Report to administrator