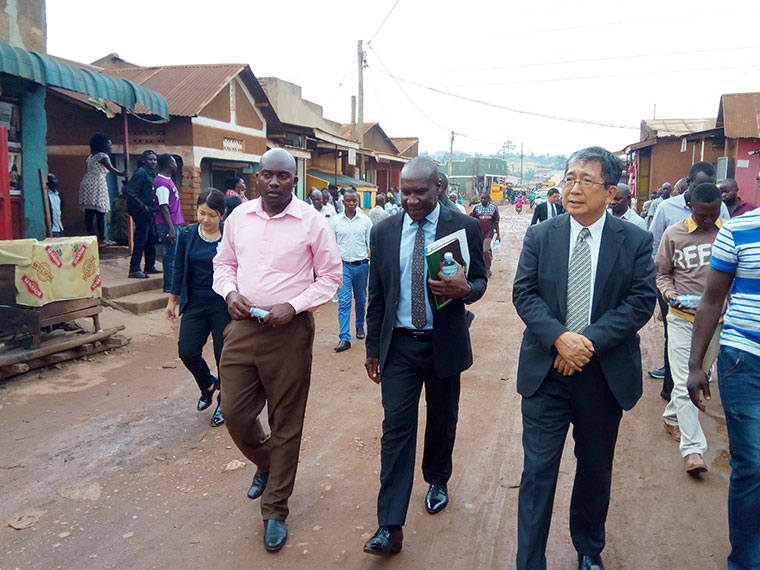 Japan has committed at least Shs 675 million annually towards the maintenance of community roads in Kamwokya, a Kampala suburb.

Do-nou is a Japanese word, which means the wrapping of soil or appropriate filling material into gunny bags and then laying them systematically on the road or other application areas.

Kamwokya is both a commercial (upper Kamwokya) and residential area (lower Kamwokya), and is one of Kampala’s most densely populated areas - dotted with poor housing, poor sanitation facilities and other living conditions.

During the rainy season, lower Kamwokya always floods due to blocked drainage systems and poor garbage disposal habits. The Japanese Ambassador to Uganda, Kameda Kazuaki yesterday, Thursday visited Kamwokya for the launch of the CORE project.

Kazuaki’s visit occurred after the signing of a grant contract between the embassy and the project manager of CORE Uganda, Yuka Iwamura at the Treasure Life Centre in Kamwokya.

The function was witnessed by both local leaders from the community as well as officials from the ministry of Works and Transport. Japan has over the years supported Uganda’s infrastructure development projects – the most recently being the completed Nile Bridge in Jinja.

According to the ambassador, Japan is now venturing into community projects such as CORE. Using the Do-nou technology, CORE inspires impoverished communities to maintain their roads by themselves without having to wait on their governments. CORE has worked in 27 countries with ongoing projects in Gambia, Kenya, Rwanda, and Myanmar among others.

“This is a huge investment in the local community in Kamwokya. CORE Japan used this simple and efficient technology and you will get to practice it over the next year. It is simple but efficient in maintaining feeder roads,” said Kazuaki.

Kazuaki also appealed to the youth and stakeholders in the community to make a conceited effort towards sustainable community development by adopting the Do-nu technology. Iwamura, CORE Uganda projects manager stressed the importance of this project on the empowerment of the youth in the areas of Kamwokya.

“In Kenya alone we have trained over 6,000 youths and maintained hundreds of community access roads” Iwamura said.

“We will utilize this technology for road maintenance in Uganda. As an organisation, we are determined to empower 150 youth and rural farmers through this pilot project in Kampala and Wakiso in 2019 and this project will bring about a lot of positive impact to road users and these feeder roads which we will maintain.” she added.

He also stressed that the well maintained roads in Kamwokya would help to ease on the traffic jam in the area since the sometimes-impassable community roads are used by people from the outskirts of Kampala to access the city centre. The project kicks off in March this year.

All Youth are trained to assemble AK47´s..and achieve Politico School in Kyankwanzi to abide by the Rules of Kurupt..even UNRWA..is a Body run by Ex-Bandits whose job is to make Sure that All Monies called Roads..is Chopped before it Touches Ugandan soil..
Report to administrator
0 #2 Akot 2019-01-25 20:38
When Ugandans bring change of leader, then put in place good governance, Japan will do the necessary to help upgrade not only community roads in Kamwokya, but electricity-railways-agriculture...in the country as well!

Ugandans have everything to gain WITHOUT Museveni!

Yet our people are the last to see that unless they UNITE & throw Museveni out, there is no way such help will help them build a future for their children!

Ugandans have no reason to go to war, but every reason to UNITE & NOW to throw Museveni out so that Japan...help them start putting the country on track of development immediately!

Even tribal leaders MUST by now know they/their children will be in trouble when their chief Museveni will be no more!
Report to administrator
+4 #3 rubangakene 2019-01-25 22:12
Thank you Japan and thank you Bobi Wine, son of Kamwokya, for "bringing the needed recognition of Kamwokya"!

If Japan is really serious about helping the youth of this country, they should look to develop the rural areas first and fast; this way they will help stop the influx of unemployed youth into the city and at the same time indirectly solving the traffic jam issue.
Report to administrator
0 #4 kabayekka 2019-01-26 16:27
But this is a city suburb that has been in the control of the new constitutionally enacted Executive Director of Kampala with a full time Minister for this city sitting directly in the National Presidential cabinet!
Report to administrator