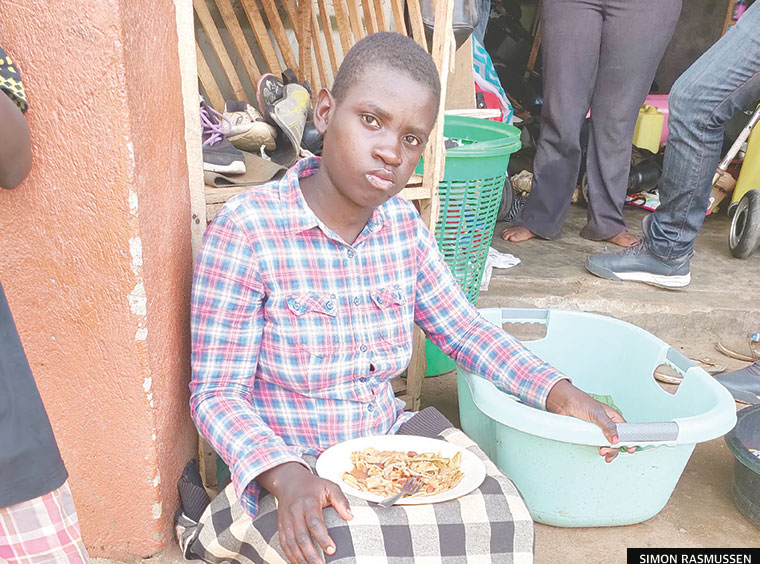 Mental illness rarely gets a burst of serious national attention in Uganda.

The norm dictates that suspected patients must seek first-line treatment in form of psychological help or see mental-health clinicians. But in Uganda that is a rarity. Some, especially in rural and slum areas, run to witchdoctors, who try to exorcise “evil spirits” in their patients, but end up furthering the progression of the mental illness.

The sick are often isolated from friends and family because of the stigmatization of mental illness. Experts believe that even talking about personal problems can lower the risk of mental disorders, but because of the isolation, some patients turn to drugs or alcohol to cope, and again this substance abuse furthers the progression of the mental illness.

According to a 2015 study, up to one third of Uganda’s 40 million people suffer from a kind of mental illness. With over 50 per cent of the country’s urban population living in slum areas, most problems are concentrated there. In Bwaise, Makerere Kavule in Kawempe division, one of the most densely populated slum areas, people seek help in large, open churches and from the goodwill of others.

Musa Kayiwa, a resident of the area, is more familiar with mental health problems in Kampala’s slum areas. He runs an IT repair shop in the area, which he started after finishing his studies in South Africa.

“When I came back, I started noticing. When you have been somewhere for a long time, you stop noticing things, but when I came back from South Africa, I noticed how many [people] showed signs of mental illnesses,” he said.

Most people with mental illness in the area are forced to work to support themselves and their family. Mental illnesses are caused by a number of factors, according to the ministry of Health. Some are triggered by stress, and poor nurturing environments, such as broken homes.

“One of the causes here is stress of everyday life. Before I went to South Africa, I didn’t even know what stress was, before people started saying ‘Oh, I have to relax, I’m so stressed’. We don’t have that in Uganda, it’s not something people know about,” Kayiwa said.

According to MQ, a mental health research center, chronic stress affects the body, and can ultimately cause mental illnesses such as depression or post-traumatic stress disorder (PTSD). Likewise, the Psychiatric Times has shown how poverty can lead to a variety of mental health issues, as well as developmental problems.

One person ravaged by mental health issues is Jennifer Nataka. On a good or bad day, she sits on a set of concrete stairs in front of one of the local stores in Bwaise with a blanket, eating kikomando. Usually she holds her fork in the palm of her hand. She whispers when she talks.

When she was 15 years old, she was raped in her village and became pregnant. After giving birth to her child, she left for Kampala, and has been living on the streets for the past 10 years, supporting herself through prostitution and well-wishers.

Organizations working in slum areas are trying to mostly help people climb out of poverty, and not necessarily heal from mental illness. Rabiah Bira and Shaluwa Sanyu work with Plan International, which offers aid to people trying to get a profession or go back to school. They have a stack of papers with names and ages of young people in the area, who they try to locate.

“What we can do is, we can ask her [Nataka] if she wants to go back to school, and we can pay for the school materials,” Sanyu says.

But this may not be an option for a mentally ill person with no family to support him or her. Butabika hospital, Uganda’s only mental health hospital, could be the other viable option.

Another problem in seeking help for the mentally ill is that mental illnesses are almost always associated with evil spirits or witchcraft. In Bwaise, people seeking to get rid of evil spirits go to the Christian Life Church, a massive church built within a warehouse.

Rehema Balinde went to the church because she lost her job and hasn’t been able to find another.

“I have spent the past six months not working and I can say that mental illness is not about witchcraft. Sometimes, I speak to myself,” she said.

Sitting on the bench next to her is Jane Nalubowa who disagrees with her assertion.

“She is more likely possessed by an evil spirit that came from the grave,” she said of Balinde.

Nalubowa believes she is possessed by an evil spirit that ruins her ability to build relationships with men. She is at the church to pray.

“I am here for prayer, to chase away the evil spirit,” Jane said.

Others turn to herbal medicine. In the center of town, a group of people are huddled in a circle listening to a man selling ordinary vegetables. The vegetables lie on pictures of people, with different illnesses, such as blindness or deformity, among others. The man claims he can cure all kinds of illnesses using his vegetables.

In the same area, there are some organizations that work on lowering depression. One of them is StrongMinds Uganda. StrongMinds uses group-therapy, called Group Interpersonal Psychotherapy (IPT-G), which targets groups of women of 10 to 12.

“We use IPT-G in groups, meaning people are in a group of people, that will support each other,” Gloria Birungi, staff member of StrongMinds, said.

The therapy is done at the community and aims to give the women the ability to notice their own triggers for depression, through the group sessions that last 12 weeks.

“We go to the community ourselves, and do the mobilization and a pre-assessment, in order to determine if the women have depression. Then we enroll the women with depression in a group, for 12 weeks,” she explained.

Through the group sessions, StrongMinds has reduced symptoms of depression in women by around 98 per cent.