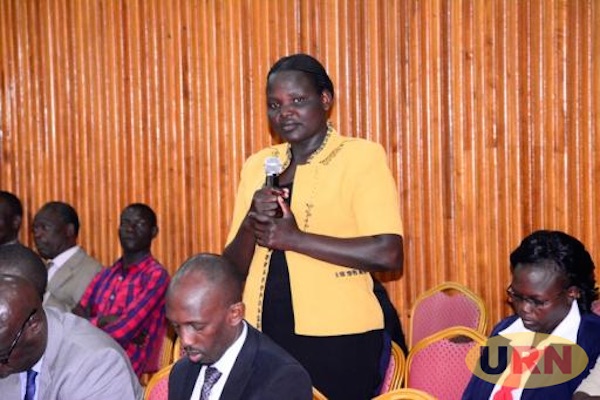 The parliamentary committee on Commissions, Statutory Authorities and State Enterprises (Cosase) today ordered for the arrest of two aides to Justine Bagyenda, the former executive director supervision in Bank of Uganda.

Juliet Adikot, Bagyenda's personal body guard and her driver, Job Turyahabwe were arrested on the orders of Cosase chairperson Abdu Katuntu over allegedly sneaking out documents from BOU and then lying under oath before a parliamentary probe. The duo provided a statement to Cosase sub-committee that was contradicting the one provided by the BOU director of security Milton Opio about Bagyenda's movements.

It all started when they told the sub-committee chaired by Uganda People Defense Forces (UPDF) representative Brig Francis Takirwa that after ferrying bags from the central bank on Saturday, February 10, 2018, Bagyenda travelled abroad.

They claimed in their statement that; they picked Bagyenda up from Entebbe airport on her return in March 2018 and drove straight to the central bank on Kampala road.

The system shows that the vehicle left the airport at 12:03pm to Kiswa in Bugolobi where it was parked for 3 hours before heading to the central bank.

Adikot and Turyahebwa were captured on CCTV entering the building with two heavy bags through the emergency door that was already opened without going through security checks and left with Bagyenda at 6:50pm.

The contradiction infuriated the Cosase chairperson Abdu Katuntu who accused Bagyenda's aides of perjury. He immediately directed officers from the Criminal Investigations Department (CID) attached to the committee to arrest the two for criminal investigations.

He asked police to present weekly reports to the committee on the matter. The MPs also handed over two security officers from the central bank; Beatrice Kyambadde and Charles Muhoro to the CID officers for alleged negligence when they failed to check the bags of Bagyenda's aides out and back into the bank.

The BOU deputy governor Louis Kasekende assured legislators that the central bank is taking the matter seriously and is to carry out parallel investigations to get to the bottom of the matter.

"The breach of security is a very serious matter. There are a number of issues that have been revealed here. We have committees of the bank that will investigate in parallel to any investigations that have been directed by  this [Cosase] committee. Two, I want to report that we have a lot of interest when things like these happen." Kasekende said.

In their testimony to the Cosase sub-committee Adikot and Turyahabwe said they didn't  know what they carried out of the central bank on behalf of Bagyenda.

"Adikot first carried a blue open kaveera [plastic bag], she said that she was more concerned with the security of the items and did not want to see what was inside. Also Turyahabwe said that he did not know what he carried," Brig Takirwa reported.

Takirwa pinned Adikot saying that she feigned knowledge of what was she moved out of the Bank yet she is seen on the CCTV carrying an open box with visible box files.

He further said that the other two security officers at the central bank, Beatrice Kyambadde and Charles Muhoro admitted to have allowed Bagyenda's aides move out of the bank premises with the bags without being checked but can't tell what was taken out or returned later.

But all should know, that if they keep on pushing, an avalanche of compromising information will start to flow, and very few will come out of this looking clean.

If I were govt, I would find a quieter way to solve such disputes. This kind of ugly fight can bring the whole system falling down on top of all of us!
Report to administrator
0 #12 Lakwena 2018-12-01 12:17
Quoting Treva:

Lakwena- Open your eyes. This inquiry is going nowhere. The only purpose is to destroy a few reputations.

But all should know, that if they keep on pushing, an avalanche of compromising information will start to flow, and very few will come out of this looking clean.

If I were govt, I would find a quieter way to solve such disputes. This kind of ugly fight can bring the whole system falling down on top of all of us!

In other words Treva, there is no secrets/quietude about dishonesty. However much you keep sweeping the dirt under the proverbial carpet, it will keep bulging and festering;

until you are forced to pull off the carpet and clean the filth yourself and face the embarrassment.
Report to administrator
0 #13 Lakwena 2018-12-01 14:41
Quoting Treva:

Lakwena -You cannot harass and intimidate witnesses in the way that Katuntu did, and call this inquiry fair.

A driver and a bodyguard, who are very lowly employees, must be protected against incriminating themselves.

These basic legal protections, that are guaranteed by the constitution and by custom, were absent, and the two employees are now in detention.
....

It is not the duty of parliament to waste our taxes on fanning these baseless rumors.

But Treva the current Katuntu Committee is not a Counseling and Guidance Session for confused BOU staff.

In other words, unless tough questions are asked these guys want to get away with closed banks robbery and murder.

What you bastardize (trivialize) as lowly drivers and bodyguards, are BOU beneficiary fat cat witnesses who must not be treated with kids gloves.
Report to administrator
0 #14 Lakwena 2018-12-01 14:51
Compared to other Public Service drivers and/or the police; look at the duo's shinny, fat cheeks and potbelly, does that make them lowly and miserable, not deserving being kept under "safe custody?"
Report to administrator
12