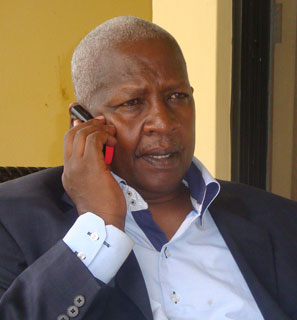 The US Federal Bureau of Investigation (FBI) tapped phone calls and emails of Uganda Foreign minister Sam Kutesa and his wife Edith Kutesa after they were suspected of being involved in bribery acts at the United Nations (UN).

Kutesa served as president of the UN General Assembly from 2014 to 2015 and is alleged to have received a $500,000 (about Shs 1.8 billion) bribe from Chinese national, Patrick Ho of China Energy Fund Committee (CEFC) in exchange for obtaining "business advantages" for the Chinese energy company.

According to the Sydney Morning Herald newspaper, US prosecutors have submitted evidence before court suspecting the Kutesa’s of getting involved in bribery acts while at the UN.

Kutesa and his wife Edith Kutesa, have also been mentioned in their dealings with Sheri Yan another Chinese national, who was "once known for hosting soirees around the world where diplomats mingled with millionaire business executives and socialites."

Kutesa’s wife once worked for Yan and phone taps suggest Yan and Ho were working together to exert corrupt influence inside the UN. Yan was arrested by FBI agents in October 2015 and is accused of bribing the former 68th president of the UN General Assembly, John Ashe, the Sydney Herald reports. Kutesa was the 69th president of UN General Assembly.

Yan is the founder of Global Sustainability Foundation (GSF), which, according to her pitch, is backed by “political leaders, successful business people, and members of the world’s best-known families.”

Edith Kutesa and John Ashe were listed as GSF’s only two advisers. According to the Sydney Herald, while the GSF was engaged in some altruistic work, evidence gathered by the FBI suggests, Yan’s appointment of Ashe as a GSF adviser was to enable Yan to pay him a monthly bribe of $20,000, supplemented by larger kickbacks.

There is no evidence suggesting that Yan was directly bribing the Kutesas, although information gathered by the FBI and recently disclosed in a US court suggests that other Communist Party-aligned figures close to Yan had plans for this to occur. What is certain is that by 2015, Yan had the 68th and 69th presidents of the UN General Assembly ensconced in her NGO.

Ashe was on its payroll and Kutesa’s wife was appointed as “a major member of the Board”, the Sydney Herald further reports. The appointment of Kutesa’s wife raised the intelligence signals of the FBI, who, in 2015 started to covertly monitor Yan, Ashe and Kutesa’s communications.

This investigation, the Sydney Herald reports, had Yan pegged as one of more than a dozen suspects involved in three UN NGOs with links back to the Communist Party in Beijing. Yan has been described by US prosecutors as a “woman who performed corrupt acts repeatedly, over time, in multiple ways, and without any apparent hesitation.”

The US government expects that the evidence submitted will show that the corrupt relationship between the defendant [Ho] and Kutesa developed between in or about September 2014 and September 2015, when Kutesa was serving as the PGA (specifically, the PGA for the 69th session of the UN General Assembly).

This week, Ho, who has been denied bail twice already, and is accused of bribing African diplomats including Kutesa, failed to avoid criminal charges against him in the US court. According to Inner City Press, Ho tried to use CEFC's ongoing UN "Special Consultative Status" to avoid the criminal charges. But this, and Ho's other motions were denied by judge Loretta Preska on November 14, including a motion to exclude testimony from Cheikh Gadio, a former Senegalese diplomat.

Ho was trying to exclude testimony from initial co-defendant Cheikh Gadio about Chadian President Idriss Deby's reaction to the bribe. Ho was arrested four months ago for his alleged role in bribing Gadio and Kutesa.

According to the prosecution, Gadio is expected to testify, in sum and among other things, that (i) the defendant provided $2 million in cash, concealed within a gift box, to the President of Chad in connection with a business meeting in Chad in or about December 2014, (ii) the President refused to accept this obvious bribe, which Gadio understood was connected to the defendant’s interest in business opportunities in Chad, and (iii) the defendant thereafter drafted a letter to the President, purporting to pledge this $2 million to charitable causes, but the defendant appeared to have no interest in doing charitable works in Chad, and indeed, the defendant never asked Gadio about the status of the purported “donation” or made any other reference to the subject.

This expected testimony according to Inner Press, considerably strengthens the government’s proof beyond the already-strong case reflected in the detailed complaint. The complaint explained that, following a December 2014 business meeting in Chad, the defendant drafted a letter pledging a $2 million so-called “donation” to “the people of Chad at [the President of Chad’s] personal disposal to support [his] social and other programs as [he] see[s] fit.”

The complaint did not, however, explain whether—and at what point—any money was actually paid. Gadio’s expected testimony makes clear that, in fact, the defendant provided $2 million in cash directly to the president, concealed within a gift box, and that the pledge letter was drafted after the bribe had already been offered.

Ho also applied on November 13, to exclude from the trial, his dealings with Kutesa's predecessor as UNGA President Sam Ashe. According to Inner City Press, this UN-accredited NGO offered to broker arms not only to Chad but also Qatar, Libya and South Sudan.

Accordingly, Inner City reports, Ho and CEFC offered themselves as way to evade Iran sanctions and this evidence will come in a trial but the government has agreed not to mention terrorism or US-Iran relations during the trial. Also, a 23-minute video of Ho's UN speeches will not come in after being called "gauzy". A new trial date set for November 26.

Ho and Kutesa maintain their innocence.

Lies and induendo and you asshole flies just spill out your beans in hate and malice against Honorable Sam Kutesa who does the perfect job as Uganda top diplomat in global stormy waters.One urban legend says" Ones doesnot eat whatever flies!"
You need another rock? YESS SSEBO!!!
Report to administrator
12