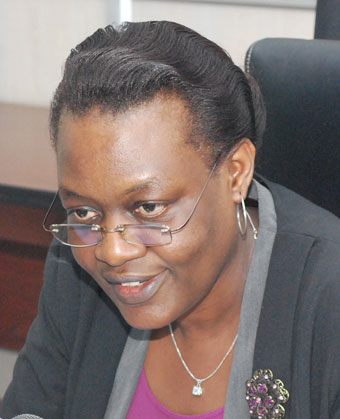 Police is holding two suspects, both staff of what it calls a ghost organisation, Poor Youth Research Uganda on allegations of threatening to harm the Inspector General of Governments (IGG) Irene Mulyangonja.

Ben Sebuguzi, the secretary general of the organisation and Lillian Mukiibi were arrested on Wednesday from Kampala road and taken to Special Investigations Unit in Kireka. However, police denied he was in their custody.

Patrick Onyango, the deputy police spokesperson says that the suspects have been blackmailing, extorting and obtaining money from key personalities in the country.

Onyango also says the suspects who have been working for an unregistered organisation recently called IGG Mulyagonja and demanded that she releases information in her possession to them.

"The most recent incident, they demanded information in possession of the IGG, Ms Irene Mulyagonja to be released to them, if not they would do something she will regret. The IGG complained to police and director CID began investigations that led to their arrest," Onyango says.

He says that during the investigations, it was established that the organisation had never been registered with the Uganda Registration Service Bureau (URSB).

The suspects were then tracked using the telephone numbers they used to call Mulyagonja until they were arrested.

0 #1 katende charles 2018-11-09 10:38
its good because the IGG informed police as earlier as possible, but let me hope that Onyango is free from any scandal,as we see Bakaleke.
Report to administrator