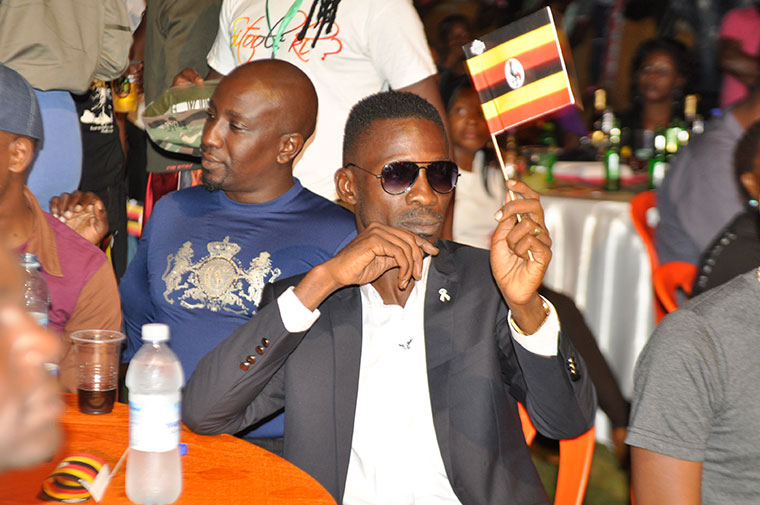 Less than three days after they signed an agreement on a new date for the Kyarenga music concert, the management of Namboole stadium has now reportedly informed Kyadondo East MP Robert Kyagulanyi that the facility has been booked until January 2019.

Kyagulanyi aka Bobi Wine had sought for an alternative date after his October 20 Kyarenga album launch concert got blocked by police on grounds that it was not part of the events booked to utilize the facility on that day - among them a wedding.

However on October 20, there was no sign of any events at the stadium. Bobi Wine through his event managers, Emma Promotionz and Marketing Agency met with Namboole managers and rescheduled the launch to Friday November 9. Namboole set three conditions including - securing written police permission, making full payment and no access to the turf during the event.

But yesterday Saturday, Namboole informed Bobi Wine that the Federation of Uganda Football Associations (Fufa) had written to them on October 17 urging management to call off the rescheduled concert.

“It has come to the Federation notice, that Mandela national stadium management has entered into an engagement to have a public event take place on 9th November 2018 within the stadium.” reads the Fufa letter signed by CEO Edgar Watson Suubi.

“In our opinion any public event within the international football match period will put the stadium into an unacceptable standard to the detriment of CAF docking off points from the Uganda Cranes for the upcoming match due on Saturday 17th November 2018 with Cape Verde. As you are already aware CAF [Confederation of African Football] already warned Uganda on the stadium standard after a similar event was organised before the Uganda Cranes played in October 2017 last year.”

FUFA warned Namboole that they have been put under the “red flag” by CAF and the Cranes game against Cape Verde may be put off. Bobi Wine says he'd committed to respect the turf/grass conditions set by Namboole and finds it 'shameful' though not surprising that the show has been cancelled again.

“They ran out of excuses and we chose Friday 9th, November! They gave us very tough conditions for the use of the stadium thinking that we would not meet them. One of them was that out fans must not use the turf/grass during the show, and they imposed a very huge fine if this was violated. We complied with all the conditions and signed the necessary documents with them. Having rebooked the venue, we made fresh adverts and started advertising the new date.” said Bobi Wine on Facebook.

“Please note that the same stadium has so many other events scheduled and none has been canceled except our concert!” he added. “How can the regime be very scared of Ugandans meeting for a music show, simply because it is hosted by Bobi Wine?! I also know that they are doing everything possible to block all my businesses and other sources of income.”

Bobi Wine said they have started looking for alternative venues and will hold the concert “pretty soon”. Similarly last year, police blocked Bobi Wine's countrywide concerts on grounds that he'd failed to differentiate between Bobi Wine the musician, and Robert Kyagulanyi, the politician.

Through his lawyers, M/s Rwakafuuzi & Co. Advocates, Bobi Wine sued Kampala Metropolitan police commander, Frank Mwesigwa and the attorney general in the High court (Civil Division) seeking for Shs 300 million in compensation for the cancelled concerts in Mukono, Kamuli, Kasese and Kampala. The case has never been heard.

Some government officials have publicly and privately raised concerns over Bobi Wine’s concerts - warning of catastrophic consequences. They argue that Bobi Wine, who, has a massive appeal among the youth that make up majority of the population and has a global appeal, could be using the concert to rally the youth into massive city protests similar to the Arab spring protests to bring an end to President Yoweri Museveni's strong grip on power.

Since launching his political career last year, Bobi Wine has faced a blot of ugly politics including blocked concerts, having grenades thrown at his house, him and his supporters arrested, tortured, foreign communication assistants forced out of the country, charged with treason and having his movements restricted.

Why are Ugandans the only people in today world working in peace to provide tax money Museveni uses as his pocket money?

How on earth will Uganda & UK be real couintries when they have no National leadership, they don't UNITE for common causes against Museveni-Brussels that want to be sole masters yet pretend they are democratc?

It's as if Uganda & UK never existed before Museveni/Brussels & will exist no more without the 2 masters, self styled gods!
Report to administrator
+4 #2 Akot 2018-10-21 17:14
Museveni will never leave, never respect Ugandans, especially it's Ugandans humiliating, oppressing, harassing,arresting... one another for the demon!

Brussels said it respects Italy because it's Italy, but British has to bow down to what Brussels wants, simply because British are divided, fighting themselves & not UNITING to make their stand face to conqueror Brussels!

Why do Ugandans & British believe without Museveni/Brussels, they will be no more?

Ugandans bow down, hide, stay quiet, tremble & Museveni is sole master of slaves of a people who gave him shelter!

Why are Ugandans slaves without a say in thier own country?

Why are Ugandans used by Museveni to silence, torture, harass, arrest, block...themselves, make them NOTHING?

Forget Namboole and look elsewhere . Think of Plan B;

Go to Masaka like DP did. Go to Jjinja or Mbale.

. Even if you do it in Nakuru , Da Piipo will come .
Report to administrator
+2 #4 Omuzira Ente 2018-10-21 19:50
The will of the people will always prevail. Its unfortunate that after the bloody Luwero war some individuals still believe that a gun can suppress people's will.

Time will tell however that the more the regime becomes oppressive the sooner the people will regain their freedom.

Obote and Amin used similar tactics including killing innocent ugandans like the case is today but people became stronger. The 32years of NRM rule has been due to people support not gun.

This is simply the work of those within Government that either intentionally or unknowing want to remove Government through isolating it from the people. The more Dr. Besigye was denied freedom the more sympathy he got from the public.

The management of Namboole should desist from getting into politics as the same people watching Football are the ones going for the concert and when they decide to boycott the match it stands to lose.
Report to administrator
0 #5 jose 2018-10-22 07:43
Magogo is easy to handle