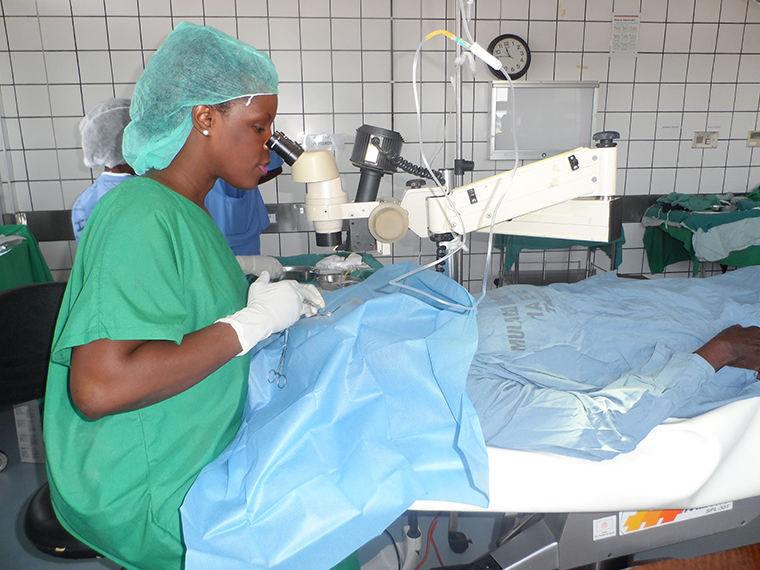 The state minister for Primary Health Care Dr Joyce Moriku Kaducu has warned public against using local herbs and urine to treat eye diseases, saying the content in the urine is acidic and has been proven that it cannot cure eye diseases.

Kaducu also said that local herbs are dangerous to use on people’s eyes since most of them are not fit to be used on eyes and can eventually damage them. She requested the public to use drugs which are specifically designed for the eye-disease and prescribed by professional health workers.

“The eye is one of the most sensitive organs that we have in our body. And for that matter, we need to take a lot of precautions, because whatever you put there, if it is not the right drug and the right composition, you could eventually damage your eye,” she says.

The minister said this on Wednesday (October 10) during a press conference at the ministry of Health headquarters in Kampala to commemorate the World Sight Day 2018, under the theme “Eye Care Everywhere” to mark the importance of sight.

The celebrations which took place in Lyantonde district today (October  11) aim at increasing awareness about good eye health and prevention of blindness. In Uganda, 57.1 per cent of blindness is caused by cataracts while uncorrected refractive errors are the commonest cause of visual impairment.

According to Rapid Assessment of Avoidable Blindness (RAAB) surveys 2012-2014, the prevalence of blindness in Uganda is 0.4 per cent - which is equivalent to 160,000 Ugandans.

“Previously it (the prevalence of blindness in Uganda) was 1 per cent, but because of the interventions that have been put in place we managed to reduce it to 0.4 per cent,” Kaducu said.

Globally more than 253 million people are visually impaired, among them 124 million have low vision while 36 million are blind. Kaducu also advised the public to avoid self-medication when facing eye problems.

“I want to advise you, even if you have itching, even if you a discharge in the eyes, ask the right person to give you the right prescription. You see, if you buy Hydrocortisol eye drops, it is different than Chloramphenicol eyedrops. These are different drugs. The bacteria and the germs that affect the eye are different. So, two cases may need different treatment,” she said.

Kaducu said, women in Africa face a greater risk of visual impairment and blindness than men due to the nature of their work such as being in kitchens. Cooking exposes them to eye problems, because smoke affects their eyes.

“Women by nature of their work are more predisposed to get eye problems, ranging from kitchen work, garden work and many other kinds. The smoke from the charcoal in the kitchen affects the eyes,” she says.

Kaducu said, they are waiting for the Tissue Transplant Bill to be legalised by parliament and once it is passed, it will allow them to transplant the eye cornea and save Ugandans the burden of going abroad for eye corneas operations.

“The Tissue Transplant Bill is in the advanced stages. That is the bill, once passed by parliament, that is going to allow transplant of tissues which includes the cornea. Just like you can have a transplant of the liver, in the same way, the cornea can be transplanted when it is affected severely,” she said.

Kaducu also threatened that government will close illegal operating eye clinics if they fail to get proper licenses and continue using unprofessional health workers yet there are many eye specialists in the country.

“If there are facilities and health care professionals that are operating without licenses and qualifications, we will take appropriate measures. Let them get proper licenses and work within regulations of the ministry of Health,” she said.

Ananah Ramadhan, the general manager Dr Agarwal’s eye hospital advised people to take their prematurely born babies to hospitals to be examined critically in order to avoid getting diseases that affect their eyes.

“When a baby is born prematurely, they get complications with different organs including the eyes. They get what we call retinopathy of maturity, that means problems with the retina in the eyes. We should not ignore that aspect, and premature babies should be examined properly,” Ramadhan said.