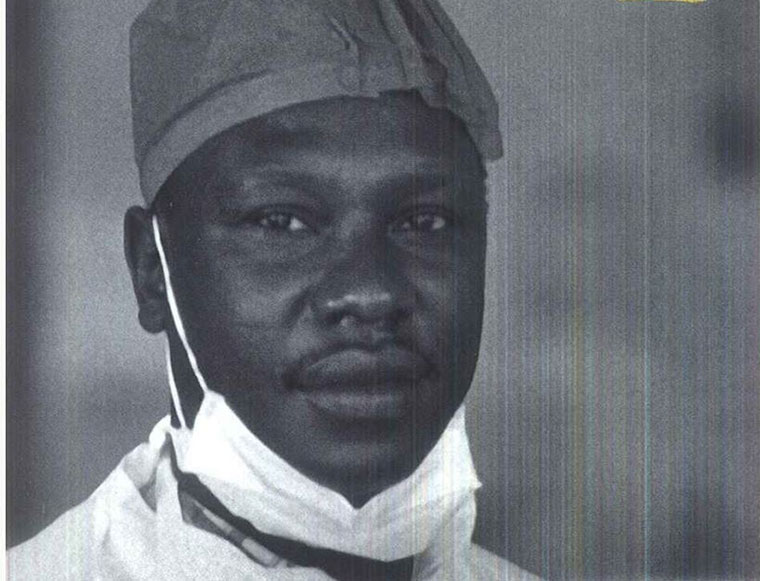 He was the 14th medical worker and 156th person to die of Ebola since it broke out in 2000, yet Dr Mathew Lukwiya’s resolute and death still stands out to date.

He epitomised medical success, commitment, medical supplies insufficiency and personal sacrifice before he contracted the disease and met his death shortly on December 5, 2000 aged just 43.

According to his wife, Margret Lukwiya, her husband contracted Ebola due to too much work at Lacor hospital, he forgot to wear his pair of goggles or a plastic face shield to protect his eyes when he was urgently called on duty to save a nurse’s life who was severely ill with Ebola.

Margaret says, at that time, there was not any doctor in the hospital who could manage the nurse, Simon Ajok’s, Ebola case and the only expert they could rely on was Dr Lukwiya.

Margaret says, when Dr Lukwiya reached the isolation ward at Lacor hospital at night to save nurse Ajok’s life, he found him coughing, bleeding and vomiting blood. All the nurses were stuck and did not know how save his life. Lukwiya tried his best but Ajok didn’t survive.

“We highly suspect that Lukwiya contracted Ebola virus in the process of treating Ajok, since he was not wearing the protective goggles yet Ajok was bleeding. He fell sick shortly and started developing fever which was treated as malaria and after few days he developed Ebola signs,” she says.

She says her husband died in too much pain all over his body. He complained of joint pains, body aches, high fever and cough.

“I didn’t see him bleeding externally but doctors said he was bleeding from some of the internal organs, like the lungs. Lukwiya’s Ebola started off as malaria with high temperature, which the doctors were treating at home. But when symptoms of Ebola started showing like joint pain, body aching and others, they took him to hospital and he was given special attention,” she says.

Margaret made the remarks last week during her husband’s memorial lecture in conjunction with Makerere University college of Health Sciences at Golf Course hotel in Kampala. He was remembered for his love and commitment at work.

Margaret explains that despite the fact that Ebola virus is so scaring, she didn’t fear going close to her husband even when he was bed ridden with Ebola at Lacor hospital.

“Though he had the deadly Ebola virus, I wasn’t afraid of him because I was very protected by ministry of Health officials and World Health Organisation (WHO). They dressed me properly with four gloves covering my fingers, a mask and glasses on my face and the whole body covered with treated clothes,” she says.

Ms Lukwiya is very grateful to WHO, which sent a team of medical experts from Center for Disease Control (CDC) and ministry of Health to examine and treat Dr Lukwiya at Lacor hospital until the time of death.

Ms Lukwiya requested CDC to improve on the protective gears for medical workers who treat patients with deadly diseases like Ebola, to avoid them from contracting such deadly diseases while handling patients.

“One of the reasons why my husband contracted the Ebola virus is that he was not properly dressed to protect himself against the virus while handling patients. With Ebola virus, you don’t need to be exposed when you are near the infected person. If your neck or eyes and other parts of the body are exposed and you are in crisis, you can easily get infected,” she says.

Lukwiya was studying a master’s degree in public health in Kampala, when the first victims of suspected Ebola emerged. The hospital requested him to investigate the disease, which had already claimed the lives of 3 student nurses at Lacor hospital.

Lukwiya acted fast. He recognised the diseases as a viral hemorrhagic fever, and immediately set up an isolation ward following a WHO manual on the subject. He ignored the usual bureaucratic protocol and went directly to the commissioner of community health services at the ministry of Health, which led to the involvement of WHO and CDC Atlanta.

When the WHO team arrived at Lacor hospital, they were surprised by the efficiency and quality of the isolation ward. The hospital had even made a wooden device for pulling off the patients boots, exactly as the WHO manual described.

The staff gathered in the assembly hall of the hospital’s nursing school, asking for the hospital to be closed. But Lukwiya was unwavering. He told them, that he couldn’t force them to stay, but that he would fight the disease alone if necessary. The nurses stayed.

He is remembered on one occasion, when the rebels targeted Italian nurses working at the Lacor hospital, but Lukwiya stepped in, offering himself as a hostage instead of the nurses. He spent a week being dragged through the bush before being released by the rebels. He is also recalled for taking part in peace and reconciliation activities in the armed conflict.

Dr Lukwiya was born in Kitgum, in northern Uganda in 1957. He was brought up in a poor family - his father being a fishmonger who died when Lukwiya was just 12. His mother a market trader.

He quickly excelled in school, coming on top of his class throughout primary and secondary schools. This gave him a series of scholarships and he was able to study at Makerere University’s medical faculty.

Lukwiya did his internship at St. Mary’s hospital Lacor in Gulu, where he continued as a medical officer.

Lukwiya held a number of different degrees. He studied hospital administration for three months in Italy, and later attained a degree in Tropical Paediatrics at Liverpool School of Tropical Medicine. He won the John Hay prize for the highest marks on the course. He turned down a lecturing position in Liverpool in order to go back to Lacor hospital.

He became the medical superintendent at the hospital in 1997, working under a heavy workload. He was head of paediatrics, while managing the hospital and immunization services, along working with different refugee camps.

But perhaps his zeal, zest, sacrifice, will always be reflected by medical practitioners as the true patriot in medicine, his death was not in vain. Rest in Peace our Giant!
Report to administrator
+4 #2 Concerned Ugandan 2018-10-05 14:12
The tragedy is that even in the face of stories like this the government shamelessly prioritizes high-end SUVs, foreign travel and let us not forget the MPs who are always prioritizing there own emoluments.

In the meantime, people like Lukwiya are confined to the dustbin of history while his colleagues continue to work under pathetic conditions!
Report to administrator
+2 #3 Mark Mugisha 2018-10-05 15:49
These are the real heros and heroines of Uganda including General Omukama Kabalega who led that fierce fight against the british in Bunyoro among other unsung ones.