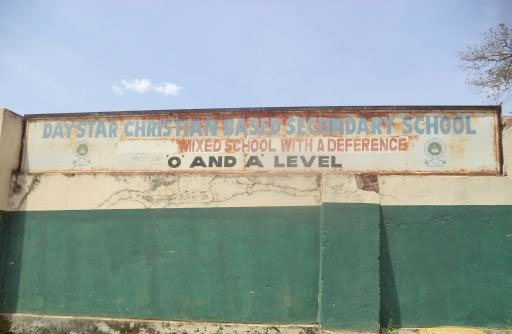 Kilama jumped over this fence

A Uganda People's Defence Forces (UPDF) soldier survived being lynched by students after he was caught sneaking into a girl's dormitory at Daystar Christian Based Secondary School in Hoima town.

Geoffrey Kilama who is attached to the Mubende UPDF Detach is now nursing injuries following students' beatings. He allegedly accessed the dormitory after climbing over the perimeter wall.

When he entered the dormitory, the girls made an alarm that attracted male students and security guards who arrested Kilama. Kilama tried to escape from the students but was overpowered. The rowdy students pounced on him and he sustained severe injuries on the head, legs and hands.  He is currently admitted at Hoima police health center IV.

Isaac Kiragwire, the school director says that it is the first time the girl's dormitory has been invaded by an intruder. He wants the police to investigate the motive of Kilama.

"As he was struggling to jump, the [barbed] wires cut him...The boys were coordinated, they chased him until they arrested him because he was not armed…We knew he was somebody who had come to rape the girls at that time because of the way he was - without even a trouser. He looked a very harmful person, so dangerous. So the students were even prepared to finish [kill] him only that  a member of staff said lets not take the law in our hands

Kilama was reportedly in Hoima on official duty with a high ranking UPDF officer. He has been charged with criminal trespass under case number SD/03/27/9/2018.

Mixed schools from secondary should should be abolished as young beautiful girls always set boys on fire, even in classrooms!

The whole world gets at men for sexual abuse, yet NOTHING is done to ensure boys are protected from being excited by girls & lose their control!

Protected schools with wires will make it impossible for older man to even try to sneak in girls dormitories & schools, unless he works there!

USA-Europe males are in turmoil over sexual abuse yet, NOTHING is done to ensure women & men don't deny the fact that they MUST all respect & be decent with one another, for the protection of both sexes!
Report to administrator
+1 #3 Mandela 2018-09-30 11:45
When the end time of a regime is eminent anything is possible.
Report to administrator
-3 #4 Akot 2018-09-30 16:29
Lakwena,

Your anger is understandable, if the students had sent him to rest in peace, their lives would have been destroyed!

Beating the sexual maniac was the best thing done!

We always get so so mad & don't think before action & this reduces us to the level of demons!

This is why Akot sings Ugandans to UNITY that is the only means to throw Museveni out, get back our country, without further helping him destroy it and us too, as it's us he demon uses to fight one another to keep him in power!

Remember, Acholi stood down to let the other tribes have Museveni, otherwise, it would have been blood bath!

When the end time of a regime is eminent anything is possible.

This is why it's of outmost importance/urgency tribal leaders stand down & Ugandans have just 1 opposition leadership to organise our people!

Imagine if Museveni drops dead NOW, what will our tribally divided & ruled people do?

Who will be the next chief tribal leader accepted by Ugandans as Museveni is, simply because he has no tribe/tribal land in the country & there won't be revenge, as rwandese will leave as sudanese did with Amin?

The National Executive Consultative Council put in place in Kenya/Tanzania took over immediately after Amin, to run the country & prepare election, right?

But today, Uganda is not prepared for "after Museveni"!

Will tribal leaders run their lands individually after Museveni?
Report to administrator
-1 #6 WADADA rogers 2018-10-02 17:02
The act of invading the girls dormitory is self defeating, he cannot claim that he had a girl friend in there, these girls would have demanded for what he couldn't give.
Report to administrator