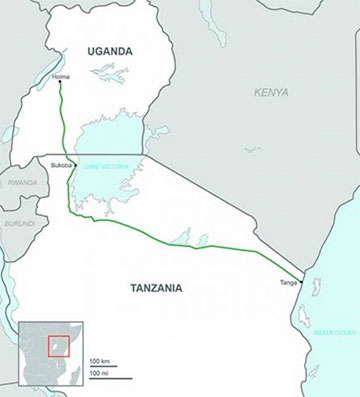 Cabinet has approved the $3.55 billion inter-governmental agreement between Uganda and Tanzania for the East African Crude Oil Pipeline (EACOP) Project.

In a statement issued on Saturday, the minister of Information and Communication Technology, Frank Tumwebaze, said cabinet discussed and approved the agreement on Friday.

The framework agreement, which provides for the foundation of the project, as well as the host government, shareholders’ and financing agreements, was first signed in May 2017, pending discussion.

The signing followed a discussion between President John Magufuli and his Ugandan counterpart, Yoweri Museveni, during his May 2017 visit to Dar es Salaam.

The two presidents had earlier signed a communiqué agreeing to begin the 1,445-kilometre East African Crude Oil pipeline (EACOP) from Hoima in western Uganda to the northern Tanzania seaport of Tanga.

Tumwebaze said the agreement lists areas of cooperation for the two nations so as to establish and maintain favorable conditions for the implementation of the EACOP project.

“The states undertake to ensure  the acquisition and grant of land rights in their territory and maintenance and possession of such rights by the pipeline project company is fair, transparent and legally enforceable,” he said.

The agreement also highlights the role of both governments in providing safety and security for the project.

On issues of national content, the states are expected to cooperate with each other and with the Pipeline Project Company in order to identify, develop and agree in a timely manner National Content Plans, National Content obligations and Procurement plans.

Cabinet has authorized Muloni to formally lay the ratified Inter-Governmental Agreement before Parliament in line with Uganda’s Ratification of Treaties Act.

Cabinet also tasked Foreign Affairs minister Sam Kuteesa to deposit the same Inter-Governmental Agreement and all instruments of ratification with the relevant international bodies. Uganda expects to start pumping its first oil to the international markets in 2020.