The proposed amendment of article 26 of the Constitution to allow government take possession of private land without prior compensation continues to fiercely divide opinion in parliament.

Opponents of the draft legislation claim the amendment is a government ploy to grab people’s land. But government argues that the amendment would stop the long delays in developing infrastructure projects, which also lead to escalation of costs.

In short interviews with The Observer over the past two weeks, 73 out of 100 MPs surveyed across the political divide said they would oppose the bill if it comes to a vote.

Only 11 MPs said they would support the draft legislation, while 16 said they were still undecided (see table). 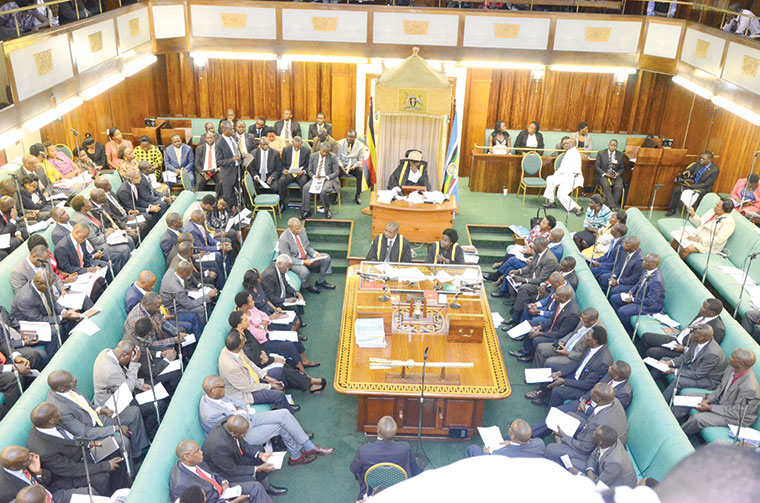 MPs who support the bill agree with government on this point. “People in Kyegegwa are suffering because of one person,” Kyaka North MP Paul Asaba said.

“I support this amendment because some Ugandans are very stubborn. For example, in a sub-county called Ruyonza where they are supposed to put a water purifying plant, the owner of the piece of land, which is 100 feet by 100 feet, asked for 50 million and when we got the money, he increased [the price] to Shs 100 million. Now he wants Shs 150 million,” Asaba said.

Col Fred Mwesigye, the Nyabushozi MP, said the “negative elements” campaigning against the bill and sowing seeds of mistrust are doing this country a disservice.

“People should trust government. It is a trustee of every interest of a Ugandan; why should they doubt that government is not going to pay them promptly? Who said that?” Mwesigye asked.

While opposition MPs are predictably united against the bill, many NRM MPs have broken ranks too, leading to doubts as to whether the government will get the required numbers to push it through.

Some of the undecided MPs told The Observer they needed to first consult their voters before they can take a position on the matter. Of the 100 MPs interviewed, 54 are from the ruling NRM, 13 belong to FDC, 11 are DP, two are from UPC and 20 legislators are independents.

Nakaseke South MP, Paulson Luttamaguzi, said the land amendment is redundant because no government project has stalled due to lack of land.

“Do you want to tell me that the Standard Gauge Railway stalled because people never wanted their land used? Uganda Airlines stalled; is it true that people stopped Uganda Airlines from using their land?” Luttamaguzi asked, rather sarcastically.

Christine Achen Ayo, the Alebtong Woman MP, said a lot of land has already been given to government for schools, hospitals and even barracks; so, it should first utilize that. Whatever land that is left, she said, is for people to eke a living.

Barnabas Tinkasiimire, the Buyaga West MP, said he doesn’t support the bill because it could be manipulated by some big shots to steal people’s land. Margaret Lamwaka, the Kitgum Woman MP, said she could not support the displacement of people for infrastructural development.

“People also have their rights that before they are displaced, they must be compensated and compensation must be full,” she said. Lilly Adong, the Nwoya Woman MP, wondered why government came up with the bill yet there are many court cases regarding compensation of land.

Jonathan Odur, the Erute South MP, said he had consulted widely within his constituency and the people said they do not support it.

“I think that bill is not necessary because any law that seeks to take away people’s rights is actually a bad law. What I believe the government has failed to do is to account for the 30 years they have been in power,” Odur said.

Moroto MP, Samuel Okwir, said during his consultations, voters said several land cases were before court for more 10 years and until they were resolved, they would not support such an amendment.

“I respect the people who have sent me here. I am doing a delegated role and if they have said no, I have no objection to their decision. It is going to be worse with that bill,” Okwir said.

Julius Ochen, the MP for Kapelebyong, said there were still a lot of land issues in Teso to be sorted out.

“That amendment is uncalled for. We have a lot of issues to put right and we feel that amendment will deprive our people of the right to own land,” Ochen said.

Bonny Desales Okello, the Kole North MP, said there is no need for government to amend article 26 because it is already provided for.

“Why do we have to amend this Constitution again? Government knows that it owes people a lot of money; there are pending cases of compensation where government has not compensated people. Let government first compensate the owners of the land it has acquired compulsorily before asking for this amendment,” Okello said.

Hebert Ariko, the Soroti municipality MP, said it was okay for government to do development projects, including roads, but Ugandans ought to be mindful that as long as government is able to plan for a project, it must also be able to plan for sufficient resources to be used for compensating people beforehand.

“That amounts to simply saying you don’t have a right to property and yet we know that Ugandans are not running the industrial and manufacturing sectors anymore. Ugandans are not in charge of key economic sectors.What remains for the people is land. As a representative of the people, I stand with the people and I will not support that amendment,” Ariko said.

Butemba MP Innocent Pentagon Kamusiime said the amendment was unpopular in the wake of the current rampant land grabbing. Pius Wakabi, the Bugahya MP, said the land bill was about grabbing Bunyoro land which is rich in oil.

“It is just targeting Bunyoro; that is what I know because if they have failed to pay people before they construct for example a road, how are we sure that these people will be paid after the road is already constructed?” Wakabi said.

The fact is 90% of delays arent caused by project affected people.

But as u pass it, remember u are also Ugandans who are buying land and developing it, u won't be MPs forever.
Report to administrator
0 #2 WADADA rogers 2017-08-02 11:07
What happened, 73% is a huge number, guess no money for amendments has started flowing, you wait when they receive a handshake, they will switch to the other side
Report to administrator
+2 #3 Dembula 2017-08-02 12:04
Quoting WADADA rogers:

What happened, 73% is a huge number, guess no money for amendments has started flowing, you wait when they receive a handshake, they will switch to the other side

I am not so sure that money will be enough this time. This is a very emotive subject.

A lot of people will ignore most bad things that happen in this world as long as it is not directed at them,.

It is clear from anecdotal evidence that people are prepared to resort to self help over this and a few MPs report personal threats against them.

Famously Abiriga is reportedly going to get a pistol to protect himself. These proposals have the potential to cause a change of government.

If they go through I doubt it will take a lot of persuasion to see the masses revolting.

Even the ignorant may not understand the finer points of finance but they certainly know the land their ancestors are buried in and you tamper or threaten to tamper with this at your peril.
Report to administrator
0 #4 Remase 2017-08-02 14:41
“I support this amendment because some Ugandans are very stubborn. For example, in a sub-county called Ruyonza where they are supposed to put a water purifying plant, the owner of the piece of land, which is 100 feet by 100 feet, asked for 50 million and when we got the money, he increased [the price] to Shs 100 million. Now he wants Shs 150 million,” Asaba said.

Who cares, pay it or leave it. Period. That is the Beauty of ownership. M7 wants to own our land too!!! Hell no.
Report to administrator
+3 #5 Joe1 2017-08-03 02:02
This Bill is a disguise to steal people's land. Museveni and his people have stolen a lot and knowing that they can not keep their money in overseas account, they are now putting it in buying lands.