Log in
Updated an hour ago
Most Popular:
9 - Matooke prices drop from Shs 15,000 to Shs 1,000 in Ankole
8 - NINA ROZ: Money and looks are extras in a man
7 - Botswana investigates mystery deaths of 275 elephants in 2 months
6 - 6 killed, 15 injured in fresh Somalia bombings
5 - 3 more Ugandan returnees test positive for COVID-19
4 - Uganda's registers 16 new COVID-19 cases
3 - UAE president so rich he doesn’t know some of his mansions
2 - Ministry of Education okays online learning for universities
1 - Nsambya detains for 3 months mother who lost baby over unpaid bills

According to the United States Geological Survey, the earthquake had its epicentre at Kilembe in Kasese district around Lake Edward region. 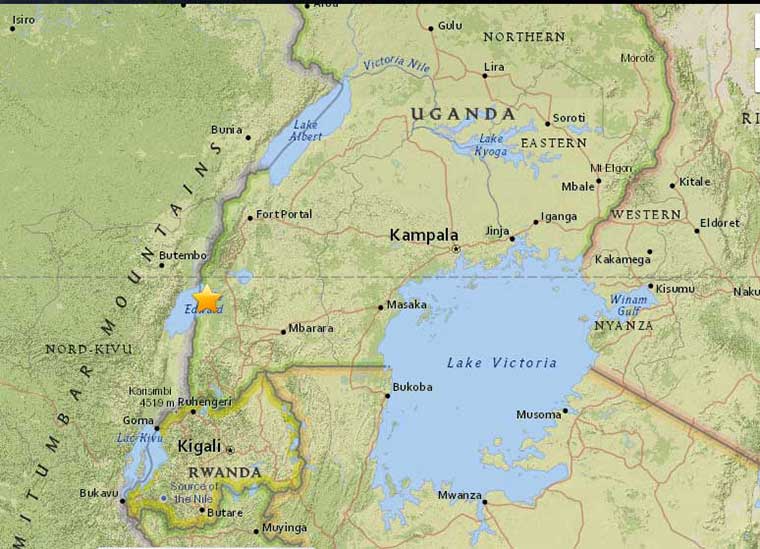 No damages or casualties were recorded as a result of the tremor. However, some residents were forced to flee their houses. Moses Atugonza, a resident of Kagote in Kabarole district says that he had to wait outside his house for about five minutes until the shaking stopped.

At St. Mark Church in Kilembe, the 10:00am service was interrupted. Rev Sam Kule who was the preacher was forced to halt the sermon for five minutes as some Christians fled the church.

The most powerful earthquake recorded in Uganda occurred on March 20, 1966 in Tooro leaving at least 157 people dead. The tremor with a magnitude of 6.8 and a depth of 36 km lasted 3-5 minutes and hit areas near the border between Uganda and the Democratic Republic of Congo.