An investigation by the National Council for Higher Education (NCHE) has placed the spotlight on PhD programmes offered by Kampala International University (KIU) for the second time in five years.

The findings from the investigation indicate that the university continued to admit and graduate PhD students without authorization. They further indicate that some of KIU’s PhDs are not accredited by the council, while some students’ dissertations need revision.

Basing on those findings, NCHE ordered KIU to stop admitting new students for doctorate (PhD) programmes, The Observer has learnt. The investigation report was compiled by NCHE’s accreditation and quality assurance committee during an April 26, 2017 meeting and later forwarded its recommendations to the council.

While presenting the report to other members, according to inside sources, committee chairperson, Dr John Senyonyi, also the Uganda Christian University (UCU) vice chancellor, asked the KIU vice chancellor, Prof Mouhamad Mpezamihigo, to step out of the meeting until discussion on his students’ PhDs is completed.

“Dr Senyonyi did the right thing for fear of conflict of interest. Besides being a VC at KIU, Prof Mpezamihigo is a member of the same committee and it was in good faith to keep out,” the source said.

Dr Senyonyi and Prof Mpezamihigo have since retired after the vice chancellors’ forum recently elected new representatives to the council. The report, which The Observer has seen, found that: “All PhD candidates [currently] on accredited programmes who complete their studies at KIU must be subjected to assessment by NCHE at the cost of KIU before they can graduate.” 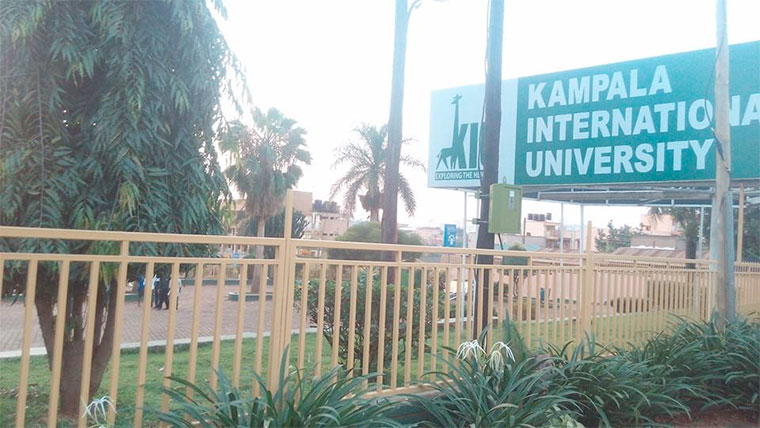 Our sources have confirmed that the recommendations of the committee were also adopted by the council’s chairperson, Prof Jack Pen-Mogi Nyeko, also the Gulu University vice chancellor, in a meeting he chaired on May 22, 2017.

When contacted on Monday about the directive to KIU, the NCHE executive director, Prof John Opuda-Asibo, told The Observer that the information we were requesting for is ‘raw’ and ‘will create anxiety for nothing’.

“But really, why do you want to talk about these things?” Opuda-Asibo asked. “We need to first interface with people at KIU, write to them officially and allow them to respond to us.”

After an investigation into 66 PhDs that were awarded by KIU in 2011 and 2012, NCHE had directed KIU not to admit and graduate any more PhD students until it rules on the matter.

However, the report found that KIU went against the directive and graduated a one Joseph Jakisa Owor in December 2015. On receiving the information, NCHE requested KIU to provide full information on all its PhD students.

“They [KIU] also applied for lifting of a moratorium on admission and graduation of PhDs that we had imposed on them in 2013.”

The report further shows that NCHE instead appointed a committee of independent assessors to evaluate the nine PhD reports. The assessors discovered that PhDs for students; Salmanul Faris Abdulrahaman, Yahaya Salisu Abdullah and Joseph Owor Jakisa were of good quality and thus recommended them for recognition by NCHE.

The report said PhD dissertations for Zakari Uba, Garba Abdullah, Lukman Tajo Siraj and Ali Adam Naniya required major revisions while those for Umar Mustapha Gambo and Charles Ajaegbu should not be recognised because their programmes were never accredited by NCHE.

“[But] KIU has since expanded the scope and mounted a PhD in Economics (by research only) and a PhD in Counseling Psychology without prior accreditation by NCHE,” the report from the assessors concluded.

NCHE appointed another committee of three technical officers to assess the work of 80 PhD candidates that were admitted without authorization.

“Out of the 80 students, over 42 students were admitted into 26 unaccredited programmes,” reads the report. “The admission and registration of these students should be cancelled by KIU and revise their PhD programmes and submit them to NCHE for reaccreditation.”

It is against these two reports from independent assessors and technical officers that NCHE has decided to also quash KIU’s application to lift the 2013 moratorium on its PhD programme.

“The [accreditation and quality assurance] department observed that KIU was not compliant with NCHE standards and, therefore, decided not to lift the moratorium for another two years starting April 1 this year [2017],” the report noted.

At the end of the two years, KIU will apply again for the lifting of the moratorium and attach a revised PhD programme document for reaccreditation.

If you need a credible and recognized credential do it anywhere else but not Uganda. In Uganda everything has a price.
Report to administrator