Asked by journalists in June 2014 why Joseph Kony and his rebel Lord’s Resistance Army had eluded the UPDF in the jungles of the Central African Republic (CAR), Brigadier Sam Kavuma swiftly responded with a question of his own; “If five people are hiding in a thick forest and they are not communicating on phone, where will you find them?”

Kavuma at the time was commander of the African Union backed Regional Task Force (RTF), which was hunting down the LRA in CAR. From the rugged and heavily forested terrain to the vast geographical area that stretches thousands of kilometres, the hunt for LRA’s Kony in CAR has evidently not been an easy one for the UPDF.

Little wonder that the UPDF announced this week that it was pulling out after seven eventful years in the jungles of CAR. In a statement, the army said the mission had been a success because the LRA had been decimated to the extent that it cannot pose any military threat to Uganda.

“Joseph Kony with less than 100 armed fighters is now weak and ineffective. He no longer poses any significant threat to Uganda’s security and northern Uganda in particular. The UPDF operations have contributed significantly to the restoration of peace and tranquility in big areas of the Central Africa Republic (CAR),” partly read the statement issued on Wednesday by Brig Richard Karemire, the army spokesperson. 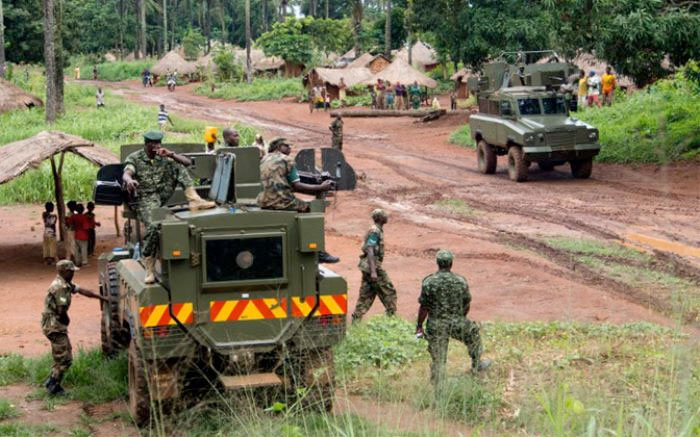 On Wednesday, the first batch of at least 2,000 UPDF soldiers deployed in CAR landed in the northern Gulu district. More soldiers are expected to be airlifted back home in the coming days.

Yet according to the army, the major objective of the mission was to kill Kony and since the rebel leader is still alive, questions still abound as to what actually led the UPDF to withdraw from CAR. Indeed, according to the statement from the UPDF, the army is still open to the possibility of rejoining future efforts to hunt Kony.

“The UPDF as a pan-Africanist force remains ready to support the capacity building of the Armed Forces of Central Africa (FACA) for counter LRA operations and may also join the United Nations Multidimensional Integrated Stabilization Mission in the Central African Republic (MINUSCA) under a strengthened mandate to effectively deal with LRA,” Karemire wrote further.

This presupposes that there may still be some unfinished business in CAR. So, why did the army actually call off the mission weeks after US troops had withdrawn from CAR?

Was the CAR mission a victim of US president Donald Trump’s new resolve to undo some of the decisions made by the Barack Obama administration?
Is Kony really finished, unable to launch any attack?

All these questions have no obvious answers.

What is clear is that the deployment of the 150 US Special Forces in 2011 by the Obama administration boosted UPDF’s mission in CAR on several fronts. According to various media reports, the US troops, under what they dubbed “Operation Observant Compass,” had sophisticated weaponry and intelligence-gathering equipment.

Secondly, given its financial prowess, US involvement in CAR was expected to take some burden off Uganda’s shoulders. At its height, according to the Washington Times, the U.S. special operations forces established a network of small airbases inside CAR, which they used to fly their Special Forces and Ugandan troops around the country.

Nevertheless, they failed to capture Kony, forcing the then US president, Barrack Obama, to prolong the American operation in CAR beyond 2021. With the elusive Kony still out of their reach, and President Trump, the new US leader, focusing his military and financial resources elsewhere, the CAR mission became untenable.

In March this year, the US announced a decision to withdraw from CAR, where the US has spent more than $780 million in six years, according to US media.

Some security and political analysts have argued that the US’s decision could have been prompted by the changes in Washington that saw Trump replace Obama.
Trump’s administration has already indicated it will devote fewer resources to peace missions abroad including the African Mission in Somalia (Amisom), where UPDF is an active player.

“Trump came to office using the slogan ‘America First.’ If the LRA does not threaten the interests of the US, they will not pay attention to it,” he said.

Kashaija said the only way the country would have stayed in CAR is if it had the resources and specialized equipment to sustain the mission. It did not.

According to Crisis Tracker, a project of Invisible Children, in January this year, Kony carried out 14 attacks and abducted 59 civilians in CAR. On this basis, it means that weakened as UPDF says, the LRA is still active and poses a threat.

However, it appears the UPDF is less bothered by the group’s activities now unless they threaten to attack parts of Uganda. In the course of the two decade-long LRA conflict, the government on several occasions declared the rebel outfit dead and buried several occasions, only for it to re-emerge and launch attacks.

Yet over the last 12 years since Kony fled to South Sudan (and then to CAR), northern Uganda has been relatively peaceful. Prof Morris Ogenga Latigo, the Agago North MP, who has been deeply involved in the northern Uganda peace process, said it was still premature to completely write off Kony.

He said UPDF needed to explain and give assurances to the people in northern Uganda that there are safeguards in place to ensure that Kony or the remnants of his group do not attack the north again.

“Kony is very cunning. He is still capable of doing something like linking up with other rebel groups in South Sudan to cause havoc,” Latigo said.

In his view, Kashaija said the LRA had lost the ability to carry out large scale attacks like it used to in the past.

He won the Central African Jungle hide and seek game.
Report to administrator
0 #3 Akot 2017-04-21 13:24
What have Acholi tribal leaders-those joining Museveni say about the picture above?

Why are Acholi helping keep Museveni in power while living like rats on their own jungle tribal land?

Yet, all say "Kony lives in jungles in CAR"!

Why can't Kony come back to live in jungle Acholiland instead of illegally occupying other people's land?

Is Museveni going to make Gulu base for his operations against Kony & against all the other tribes that brought him in but do not want him any more?

Then, all the other tribes that brought Museveni in must be worried!

Because if Acholi allow Museveni to have army base in Gulu/Kigum to scare off Kony, then all the other tribes will have to Reunite against Museveni & Acholi, right?
Report to administrator
0 #5 Akot 2017-04-21 16:51
Jens Krause, agreed, yet,

This makes Museveni more dangerous for Ugandans because tribally divided, the monster can do whatever he wants to any one who defies him while the outside world won't lift a finger or say anything!

Which tribes will they come to help & which will they leave out?

Museveni brought back soldiers from CAR to Gulu & not to Kampala-Entebbe, why?

Acholi MUST wake up, if they don't, the last 30 years of nightmare will be nothing compared to what's awaiting them!

Museveni used all the other tribes & now that they don't want him any more, he can use Acholi who are so desperate to be part of the country again!

So, it it going to be Museveni/Acholi against all the other tribes that brough him in, or complete destruction of Acholi?
Report to administrator
-1 #6 Akot 2017-04-21 16:54
Quoting Lakwena:

In other words, give Gen Joseph Kony the credit.

He won the Central African Jungle hide and seek game.

Kony only gave chance for Museveni to move in Acholiland pretending they are back from CAR & have abandoned search for Kony!

So, are Acholi going to just watch-help Musveni take control of Acholiland & make it base against Kony & against all the other tribes that brought him in but do not want him any more?
Report to administrator
+1 #7 Akot 2017-04-21 17:03
[deployment of the 150 US Special Forces in 2011 by the Obama administration boosted UPDF’s mission in CAR.]

- Obama served 4 years then another last 4 years & left Museveni in peace to just go on!

Even D.Trump will leave Museveni in power in Uganda!

So, is this helping Ugandans?
Report to administrator