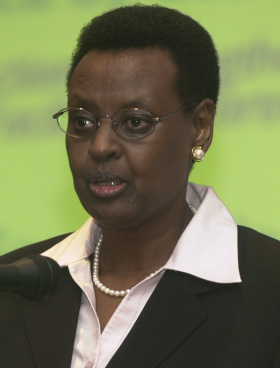 Professor refused to teach her at State House

Makerere University waved all admission requirements for the Bachelor of Education (BED) to allow the Minister of State for Karamoja, Janet Museveni, enroll for the course in 1994, The Observer has been told.
There are three categories of people who can be admitted for the four-year course. These are; direct entrants (straight from A-level with the required points), mature age entrants, and diploma holders.

The MP for Ruhama, who is also wife to President Museveni, was admitted as a diploma holder whose requirements include a diploma in education with credits in teaching subjects such as English, Mathematics, History, Geography, etc., plus teaching experience of at least three years. But Janet Museveni had neither taught for three years nor did she have the required diploma.

According to her own 2006 campaign manifesto, Janet says that she has a diploma in Early Childhood Education that she studied between 1991 and 1993. She also spoke of a “Bachelor of Arts in Education” degree of Makerere University obtained in 1997.
Prof. J.C. Ssekamwa, Dean of the School of Education at the time Janet Museveni enrolled, said BED was designed primarily for teachers already in service. That is why they were not required to go for teaching practice.

Highly placed sources at the university have told The Observer that Janet was never handled by the Admissions Board like other diploma holders admitted for the course.
The board comprises of deans and directors of schools and faculties, and is chaired by the deputy vice chancellor (academics) with the academic registrar as secretary.

Janet’s admission, according to our sources, was handled by the Deputy Vice Chancellor, Prof. Justine Epelu Opio, who was then chairman of the Admissions Board together with some members of the board. They included the Academic Registrar, Dr. Hyuha Mukwanason, Dean School of Education, Prof. J.C. Ssekamwa, and the Vice Chancellor, Prof. John Ssebuwufu. It is this committee that waived admission requirements to enable the First Lady get admitted.
Epelu Opio declined to speak about the matter when contacted. “Speak to the academic registrar, they have those records,” he said.

Ssekamwa, who is now Dean School of Education, Humanities and Sciences at Nkumba University, told The Observer that two procedures were usually followed to admit students.
He said that while the board would handle the larger group, the academic registrar would sometimes consider “one or a few applicants” on his own.
Ssekamwa said he saw this being done for the 12 years he was dean. Some sources, however, said the board handled and still handles all admissions.

According to Ssekamwa, Janet was admitted because she had a diploma and had taught while in Sweden (1983-86) as her husband fought the government in Luwero.
However, even by her own manifesto, Janet didn’t have that qualification at that time because she says she got her first qualification, the diploma in Early Childhood Education, in 1993—long after her return from Sweden, with her husband already serving as President of Uganda.
Ssekamwa said the committee had treated Janet’s papers as having been “equivalent” to the required qualifications for the course.

Some academicians say that even if the committee equated the diploma in Early Childhood Education to a professional teaching qualification, Janet had never taught for them to waive the teaching practice requirement.
In fact, it appears that she applied for BED as soon as she completed the diploma. What then did the professors consider to be the equivalent to the required papers?

A student who enrolled for this course has told The Observer that there was nothing like “equivalent”; candidates had to have teaching subjects and must have obtained credits at diploma level.
The Karamoja minister’s academic qualifications were first questioned when she decided to plunge into politics in 2005 by standing for the Ruhama County seat, then occupied by FDC’s Augustine Ruzindana.
President Museveni, who was initially opposed to her decision to join politics, came to his wife’s rescue when he called Makerere’s Deputy Vice Chancellor (Academics), Dr. Lillian Ekirikubinza Tibatemwa, also chairperson of the Admissions Board and acting Vice Chancellor, to clarify Janet’s qualifications during a political rally in Ntungamo.

Tibatemwa, having been introduced to the crowd by President Museveni, described Janet’s academic papers as authentic.
Some voters had apparently petitioned the Electoral Commission, questioning her academic qualifications.
But now the official, who addressed a public rally and authenticated Janet’s papers, tells The Observer that she “cannot comment about that matter in a public forum!”
Asked whether she still stood by what she said during the public rally, itself a public forum, the academic simply switched off.

Highly placed sources say this special student never attended any lecture, but was occasionally taught by professors at State House Nakasero.
Ssekamwa confirmed that he is one of those who went to State House to teach Janet. Asked whether this was a normal and acceptable standard, Ssekamwa says the Academic Registrar had powers to order that students be taught anywhere.
Prof. Jethro Opolot is the only lecturer who refused to conduct his lectures at State House, saying “it was not a classroom environment,” our source told us.
Ssekamwa says that as head of the school, he could not reprimand Opolot for defying the order to conduct lectures at State House because he was a senior colleague. Ssekamwa had succeeded Opolot as dean.
Opolot was supposed to teach Janet psychology of education. Alternative lecturers were arranged. Janet never mingled with other students, even during her final examinations in 1997.

In fact, our information is that the Vice Chancellor, Prof. John Ssebuwufu, temporarily vacated his office to give the First Lady space to sit her exams.
In comparison, when her brother-in-law, General Salim Saleh, wanted to enhance his education he joined Ngabo Academy in Mbarara in 1999 and mingled with ordinary students, even wearing school uniform from where he sat his O-level exams. He went on to acquire his A-level certificate, the minimum education requirement for a Member of Parliament.

The Luwero bush-war hero had been pulled out of school while in S.3 by his older brother, Yoweri Museveni, at the age of 16, to join rebel ranks in 1972.
Irregular admission to Makerere has in the past led to cancellation of academic qualifications or discontinuation. For example, former minister, Francis Babu, was ejected from his master’s degree programme after Makerere University verified that his flight captain’s certificate he had used to secure admission was not equivalent to a first degree.

. Born on August 15, 1949, Janet Kataha Museveni will celebrate her 60th birthday in August.
. Daughter of a chief, Janet went to Kyamate Primary, Ndaija Primary and Kayonza Primary school, all in Ntungamo.
. After primary she went to Bweranyangi Girls School in Bushenyi. It appears she didn’t sit O-level as she joined East African Airways in 1965 when she was 16.
. When Idi Amin captured power, Janet went to Nairobi in 1972 with her uncle, John Kazoora (RIP), the former MP for Rushenyi.
. In April 1973, she got married to Yoweri Museveni who was in exile in Dar es Salaam, Tanzania.
. The Musevenis returned to Uganda after the fall of Amin but shortly left again following the disputed 1980 general elections and the resulting guerrilla war.