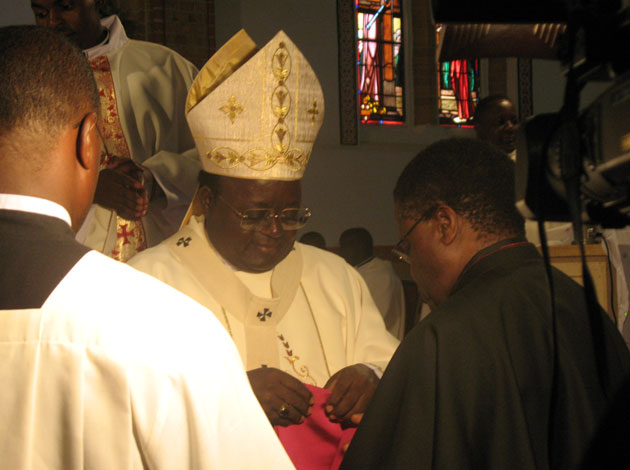 A group of Christians are seething after the archbishop of Kampala, Dr Cyprian Kizito Lwanga, transferred a priest, Fr Jacinto Kibuuka, to Bukalango in Wakiso district.

Fr Kibuuka, a young priest ordained in 2008, last year started charismatic prayer sessions in the Lubaga Nursing School, a stone's throw away from the cathedral, which attracted huge crowds, on Sunday afternoons.

These prayer sessions reportedly attracted non-Catholics, including Muslims, coming from as far as Jinja, Masaka and Mukono districts. This was after some believers claimed that Kibuuka worked miracles.

The services included live church music, during which believers seemed to enjoy dancing in a style similar to one used by some Pentecostal churches.

The neighbourhood was markedly affected by the services. Many residents used to do their Sunday shopping early in the morning to avoid missing out when shopkeepers would close to go and worship.

Consequently, attendance at Lubaga cathedral’s afternoon service is reported to have dwindled. The main hospital parking became insufficient and many cars were seen parked along the way right from Lubiri SS to Musigula stage.

The youthful and cheerful Fr Kibuuka reportedly came under attack from Pastor Serwadda, who was concerned at the dwindling congregation in his own church. Kibuuka, who then had the support of the Lubaga parish administration, was unmoved. However, his work attracted several wealthy worshippers, who showered him with gifts and pledges, including free fuel for his car whenever he wanted.

In turn, Fr Kibuuka used part of the donations to help finance the activities of fellow priests, especially those in poor rural parishes, where collections are often low. Yet this success came with risks. In March this year, the Lubaga parish leadership expressed concern at the way the congregation was acting in seeming defiance of the established leadership of the church.

“There were regular chants in the prayer sessions that they would never be challenged by the Lubaga parish leadership, as they were now more powerful,” said one priest familiar with happenings there.

The rising complaints by the parish leadership prompted the archbishop to transfer Fr Kibuuka to Mt Sion prayer centre in Bukalango, Wakiso.

“The church is not opposed to Fr Kibuuka but was concerned that his continued stay at Lubaga was affecting the integrity of the parish and the archbishop had to intervene,” explained the priest, who declined to be named.

Asked why there was no formal explanation to the aggrieved worshippers, the priest said there was a fear that any explanation had the potential to be misunderstood.

“For starters, the archbishop has the right to make transfers within his archdiocese,” he said. “The archbishop has severally defended Fr Kibuuka because he believes that there is nothing illegal he has done. But there is a fear that the prominence he received from the sessions may have got to his head.”

According to another priest, who is also familiar with the Fr Kibuuka saga, there was a concern among fellow clergy that he was becoming too proud and prominent. They believe that Fr Kibuuka has been relocated to Bukalango so he can benefit from the counselling and mentorship of an older priest in Msgr Expedito Magembe, who founded the prayer centre.

“It is a human thing. If you are gifted – and we all are in different ways – that you wouldn’t fail to feel special if you preach and gather huge crowds that give you money and gifts,” he said. “If you are not rooted in prayer, you can easily be derailed and become proud.”

This priest added that the church operations are rooted in a strict ordered system, which starts in Rome, with bishops and priests holding responsibilities at different levels. For instance, there are designated special prayer centres such as Bukalango.

“Even for people who think they are possessed by spirits and need exorcism, the church has set Fr [Dominic] Mwebe aside to help in that regard,” he says. Otherwise, anyone who acts outside the order will quickly become frustrated because every priest’s first duty is to promote the integrity of a parish, its diocese and fellow parishes.”

During his last gathering last month, Fr Kibuuka bade farewell to his followers, telling them that the venue was needed for other activities and it would not be possible for them to use it again. He also announced his transfer to Mt Sion prayer centre, Bukalango.

The announcement left many unhappy, including Kampala businesswoman, Maimuna Nalwanga, a Muslim by faith, who says she carries a rosary with her because Fr Kibuuka prayed for her and she eventually conceived after unsuccessfully seeking medical help in many hospitals. Joseph Nanseera, a carpenter at Ndeeba, still can’t believe that the transfer was made.

“I really wonder what the Catholic Church wants. Many of us had joined Pentecostal churches but have since returned. So, does the archbishop want us to go back?” he asked.

Michael Kazibwe of Kabowa thinks that the church should get in tune with the times.

“This passive way of praying and preaching which mainly focuses on Bible teaching without addressing people’s problems is outdated.”

Irene Nabacwa of Lungujja asks: “Why should the church persecute some miracle-performing priests yet they have managed to silence the previously-loud-talking Pentecostal church pastors by grabbing their followers?”

Despite the incessant questions, the church remains tight-lipped. By the time of writing this, Fr Kibuuka was out of the country on a religious trip, reportedly sponsored by his admirers.