A leaked police memo has confirmed what the police leadership has persistently denied before – that the masked men recently caught on camera flogging opposition supporters work for the force.

The leaked document was yesterday being treated as another piece of evidence that a culture of brutality and disregard of the law is taking root in the police. In the July 13 memo, inspector general of police Kale Kayihura directed his commanders in Kampala to stop using baton and stick welding masked men in overt (open street) police operations.

The memo, signed by Kayihura’s personal assistant Jonathan Baroza, was addressed to all regional police commanders, division police commanders and all units under Kampala Metropolitan Police area (KMP). Baroza is Kayihura’s right-hand man who even issues orders to people above his rank of assistant commissioner of police.

Within the police, Baroza’s word is taken to represent the thinking of the police chief. Baroza’s two-paragraph memo is also copied to Kayihura’s deputy Martin Okoth Ochola, operations director Asuman Mugenyi, and the then KMP commander Abbas Byakagaba.

“As you have noticed from the media [about] the allegations against the Uganda Police Force working with “masked groups” who occasionally operate in [an] unprofessional manner tarnishing the image of the force,” Baroza wrote.

“This is therefore to warn all commanders to desist from actively using them [the masked men] in our overt operations.”

What the memo doesn’t say but seems to suggest is that police commanders are free to use the masked men in covert (undercover) operations. The memo, which leaked late on Monday, ends months of denials by police chiefs that the masked men work for the force. Since the February 18 elections, the masked men have been busy working alongside police officials to break up opposition demonstrations through beatings.

Most significantly, the kiboko wielding ‘goons’ were used in April, a month to President Museveni’s May 12 inauguration for a 5th term. But the police leadership was quick to disown the ‘goons’ who clobbered supporters of former FDC presidential candidate Kizza Besigye on Kampala road.

At the time, Byakagaba condemned the men’s actions and accused them of taking the law in their own hands. Some police insiders have suggested that by condemning them, Byakagaba prepared the ground for his eventual removal. Apparently, he did not know that the ‘goons’ were a known unit by some senior police leaders.

The day they were first sighted publicly in action, they wore black t-shirts with black detachable hoods on their heads. Some put on military-like boots. In subsequent operations, they disguised themselves differently.

For instance, on July 12, when Besigye was released on bail by the High court, and the following day when he went to Najjanankumbi, some of the ‘goons’ wore cowboy hats and scarves round their necks to disguise themselves while others did not make any effort to hide their faces. Sometimes, they move in numberless vehicles or on motorcycles with private numbers but are escorted by police patrol trucks.

Besides the sticks, they also carry disguised hand guns. On different occasions, they have been seen retreating to Kampala Central police station after an operation. The Shadow minister for internal affairs, Muhammad Muwanga Kivumbi, told The Observer yesterday that he had gathered enough information that directly links the group to the police.

“They are organized, equipped, resourced, deployed and protected by the police and other security organs in this country,” Kivumbi said.

He called the group an illegal outfit not covered under any law as stipulated under Article 211 of the Constitution.

“The IGP is totally responsible and accountable, and all this is done with the full knowledge of the [president],” Kivumbi said.

Much as his memo says it all, Baroza disowned the masked men in an interview yesterday.

“We have never used them and I don’t know about them,” Baroza said on Tuesday when this writer interviewed him about the leaked memo.

He declined to answer any further questions.

“It [leaked memo] is not a public letter that should be accessed by all,” he said. 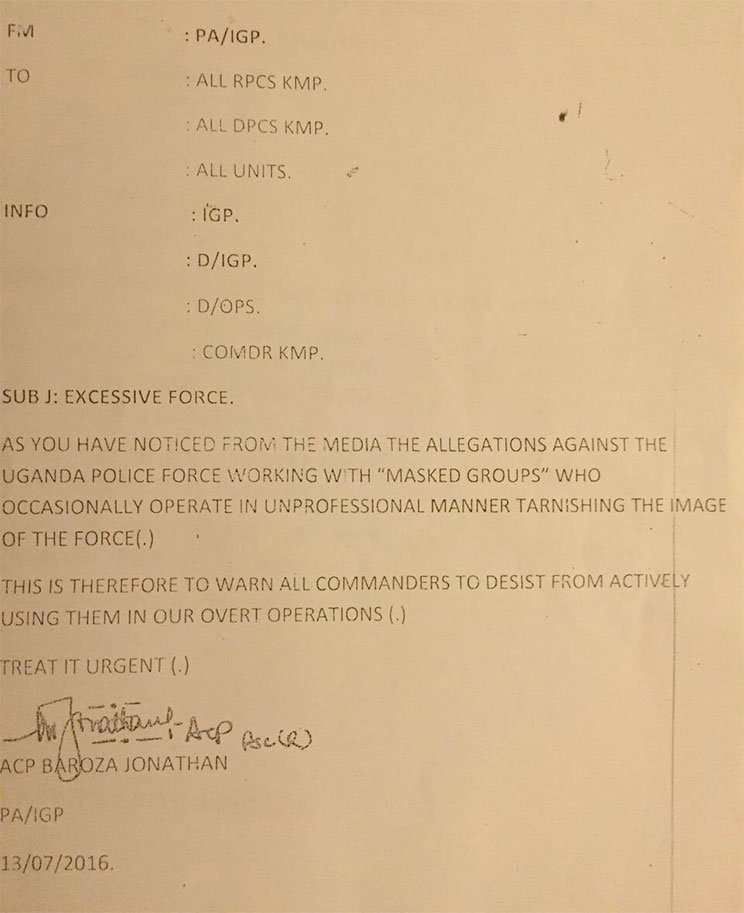 An insider police source told The Observer that the masked men are part of a special unit of police created under the controversial Public Order Management Act for crowd control.

“Those are the officers you know as FFUs [Field Force Unit personnel],” the source said.

On July 12 and 13, they worked together with their colleagues in the official FFU uniform and others in military police uniform to clobber Besigye’s supporters using electric cables and sticks.

On July 21, Kivumbi moved a motion in Parliament for an investigation into the widespread brutal acts by the police and plain clothes security operatives.

Parliament later tasked the prime minister Ruhakana Rugunda and the leader of opposition Winfred Kiiza to set up a forum for dialogue with the hope of ending the rampant confrontations between police and the opposition.

Both Rugunda and Kiiza did not respond to our phone calls yesterday; but the chairperson of parliament’s Defence and Internal Affairs committee, Judith Nabakooba Nalule, (Mityana Woman), told The Observer that her committee would look into the matter.

“We are collecting information and as a committee, we shall put it to the attention of the police management so that they can give us an explanation,” Nabakooba said.
Besides, Kayihura is also expected to appear before the Human Rights Committee of Parliament tomorrow (Thursday).