The situation is not all that rosy for many fresh faces in parliament with some demanding a special allowance to settle in their new jobs, writes JOSEPHINE NAMULOKI.

For the new MPs without a house, car and relatives in Kampala, life in the capital is a horrifying experience. In separate interviews this week, many MPs were angry at the parliamentary leadership for not preparing them for the nasty experience after they were inaugurated in May.

The MPs are particularly angry that they were not helped to deal with the settling-in challenges like housing and transport, especially for the many without houses or a car in Kampala.

“Our voters keep asking us why we are not driving the vehicles which parliament gave us. They know that we have been given money to buy new vehicles but they see us driving the same old vehicles and they are asking us why. We don’t have any explanation to give since we haven’t got any communication concerning that; what should we tell them?” he asked.

Other MPs demanded for a settling-in-job allowance.

“When I was RDC [resident district commissioner] for Serere, I was given some money as a settling-in-job allowance. Unfortunately, it does not work like that in parliament. I thought we would be given something like an allowance in order for us to settle into our jobs. We expected that parliament…would enable us to find decent places [houses] to stay, vehicles but all we have had to go through is waiting for the first salary,” Kitagwenda MP Abbas Agaba said.

“This is a job of different caliber and parliament needs to accord it [that status]. If you host a colleague from another parliament, will you have to sit with him in an office which you share with three people? We need to change our wardrobes and find decent attire, these are issues we can’t ignore,” he added. 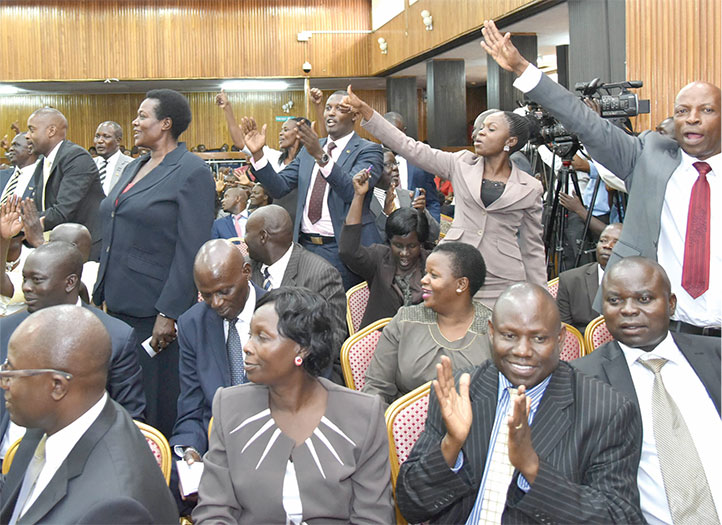 Others said since they have not been working for a while, parliament should have set aside money for them to take care of their immediate pressing needs. Sylvia Rwabwogo, the Kabarole Woman MP, said: “People thought we got Shs 50m, which is not true. We got only Shs 5m from the president at the time of swearing in [in May] and it was not enough for one to be with his/her family and voters. And remember we have not been working for one-and-a-half years because of campaigns; so, how do you handle such a situation?”

She added: “I don’t even know what we shall be getting and when?”

Ntwetwe MP Yoweri Sebikali said: “When we go to the community, they expect us to have got vehicles yet they still see us in the old ones. It is a concern for all of us and we need to know when those cars will be got.”

“It’s a concern to all of us MPs. We need transport to meet and talk to our people on issues of development and without transport, our work is difficult,” Bukooli  Island MP George Abbot Ouma said.

Some MPs told The Observer that it is important for an institution like parliament to plan for MPs at the start of every session. Upe MP Christopher Kipterit Akorikimoi said: “Civil servants like RDCs and permanent secretaries have brand new cars but MPs are still driving old small cars. I feel ashamed when I travel through Kenya because their MPs drive [Land Cruiser] V8s. They expect us also to have good cars to enable us do our work in the constituencies.”

“And it is also important to have some money as a settling-in-job allowance because it makes you settle in properly without debts but by the time one gets [his/her] salary here [Uganda], it is for clearing debts, which is unfortunate,” he added.

Buikwe South MP David Mutebi said; “When you get into a new institution, you have to get acquainted with the ways things happen there. But I know it is a huge expense [vehicle] which requires a budget and it has just been passed. For a settling-in allowance, it would be prudent to think about it because some people come from far and need accommodation and this should have been thought about in all fairness. If it [settle-in-job allowance] had been arranged, people would be patient about vehicles.”

Lutseshe MP Godfrey Watenga said: “They [parliament] have to facilitate us and we are now waiting for that. I was a teacher before coming to parliament, at this level [MP], we have to be facilitated. Compared to other parliaments, like in Kenya, it is done, why not Uganda?”

For some MPs however, it is business as usual with or without a settling-in job allowance. Rubirizi woman MP Grace Kesande said: “For us, we joined parliament as cadres; so, it is all about cadreship. Therefore, whether there is money or not, we are here [parliament] as cadres.”

Iganga woman Hailat Kaudha said in an interview: “Life for most members is tough after campaigns. Members are in dire financial constraints. Many have been waiting for so long and others have had to seek financial solutions from moneylenders to find accommodation and settle other financial challenges.”

Butebo MP Fred Mudukoi Oduchu and Kapelebyong MP Julius Ochen urged restraint. “What I know is that we are going to get money for vehicles. We need to be patient until we get new ones, we shall get them and it is not bad to use the ones we have as we wait for the ones to come [vehicles],” Mudukoi said.

And Ochen said: “There is a difference when it comes to parliament and as an institution of government and others; they differ from the NGO world. With Uganda given the enormous challenges, we have to be very vigilant as MPs and act exemplary. When we reach this level [MPs], we have the responsibility to guide.”

“We have to lead by example because teachers will also demand some allowances. I think it is very important that the responses we give should be national in nature… Before I vied for this position [MP], I knew the way I was living and if I cannot settle in, I need to keep the family in the village…”

Kunobwa said: “The parliamentary commission is not constituted but as soon as it is constituted, vehicles for MPs will be the first on the agenda to be tackled.”

The parliamentary commission comprises, among others, of the speaker of parliament, deputy speaker and four backbench legislators.