Cash handouts have long remained a critical feature of Yoweri Museveni's local politics, the president carrying anything from envelopes to sacks of money - or even naked currency notes - to help this or that cause within and outside the National Resistance Movement.

But where does Museveni get that money from? SADAB KITATTA KAAYA went in search of answers.

Every year President Museveni spends billions in handouts and bailouts to get political business done in parliament and in far-flung villages when he meets community delegations.

For instance, as he haggled with NRM-leaning independents over last month’s reelection of Jacob Oulanyah as deputy speaker of parliament, the president gave the legislators more than Shs 2bn. The money was ostensibly for MPs to celebrate their own reelection, but it raised eyebrows mainly among opposition politicians about its source.

At least 362 MPs got Shs 5m each from the president in what opposition MPs claimed was a bribe to persuade both NRM and the ruling party-leaning independent MPs to vote for Jacob Oulanyah. Some MPs reportedly received more, about Shs 20m.

President Museveni on May 19 spoke openly about the Shs 5m handout. He said the money was meant to “help his [MPs] cope with challenges of society”.

Museveni’s admission followed heckles and loud taunts from opposition MPs during his address to Parliament after the speaker and deputy speaker of the 10th Parliament took their oaths of office on May 19. His explanation, however, came short on details in regard to the source of the monies.

But scrutiny of the 2015-16 budget allocations offers a peek into Museveni’s official source of loose cash for donations and bailouts. In the outgoing financial year, the president got a budget allocation of Shs 91.3 billion for community outreach programmes and Shs 29.1 billion to host district delegations.

This was in addition to Shs 254.4 billion under the vote for administration and support to the Presidency. Whereas this particular vote is meant to provide logistical support for the welfare, security and effective performance of the Presidency, the policy statement suggests the budget was adjusted “to match changing priorities”.

According to an MP familiar with the workings of the presidency, having been a member of parliament’s Presidential Affairs committee, such adjustments to the budget are common.

In the coming financial year 2016-17, President Museveni will have about Shs 86.1 billion for community outreach and Shs 29.1 billion to host district delegations.

The budget for community outreach programmes covers the presidential expenses on any informal community functions such as fundraisings not listed as state functions.

According to the ministerial policy statement presented to Parliament last month, the Presidency used much of the community outreach budget to give donations in addition to payment of school fees for an unspecified number of students and supporting the needy.

According to the policy statement, in the outgoing financial year 2015-16, the president hosted 45 instead of 60 district delegations and hosted nine heads of state instead of 15 presidents budget for.

The Shs 120.4 billion [Shs 91.3bn plus Shs 29.1bn] budget for community donations had almost been spent within six months into the financial year. MPs are among the major beneficiaries of Museveni’s generous handouts because he often cajoles them into supporting his desired positions. 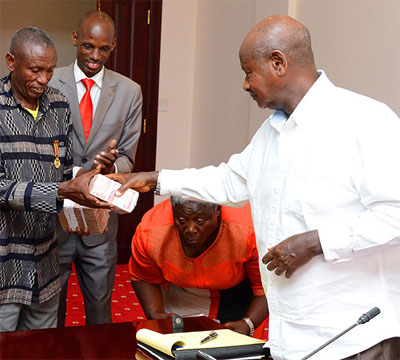 For instance, in 2005, he gave MPs Shs 5m ahead of a Parliamentary debate that lifted the constitutional two-presidential-term cap. His biggest donation so far was in 2014 when he gave MPs at least Shs 110m to clear their accumulated debts. That particular donation came within five months after the passing of the Kyankwanzi resolution that cushioned Museveni against an internal challenge for the presidency.

This came after he had spent more than Shs 4 billion on the NRM MPs what turned into a drive to popularize the sole candidacy project. Museveni’s admission in Parliament on May 19 to having paid the MPs ahead of the deputy speaker vote raised more questions about his source of the loose cash.

“The fact that he came out to admit that he gives financial handouts to the MPs, we would expect him to openly declare the source of the money,” the executive director of Anti-corruption Coalition Uganda (ACCU), Cissy Kagaba, said recently.

The package was agreed during a May 15 caucus meeting at State House Entebbe, after Buzaaya MP Isaac Musumba told Museveni that MPs wanted to eat rice and nyama choma” as they celebrated their victory.

Masaka Municipality MP Mathias Mpuuga, a member of the Presidential Affairs committee in the 9th Parliament, told The Observer last week that on several occasions, Presidency officials failed to explain in committee appearances the source of money Museveni doles out to MPs.

“He [Museveni] draws from the consolidated fund…they don’t give a damn, [because] even when answering [in the committee], the body language [of officials] is like; what will you do? We are in power,” Mpuuga said.

The State House comptroller, Lucy Nakyobe, said in a phone interview on May 24 that such donations are catered for under the president’s budget allocation for donations.

“Any donations by the president are under the donations budget; so, if he has made any donations to the MPs, it is under that budget,” Nakyobe said.

Prodded further, Nakyobe said she didn’t know about the most recent Shs 5m donation to the lawmakers.

“That one did not come from me; we did not pay from here, I don’t know where the money came from maybe you can ask the NRM secretariat,” Nakyobe said.

But Mityana North MP Godfrey Kiwanda argued that as a law-abiding citizen, there is no way President Museveni can get funds from the national coffers for his partisan political work.

“You can’t question a person who financed a five-year bush war on the sources of his funds. After 30 years in power, he is in a better position to find money even without getting it from the national treasury,” Kiwanda said.

In Parliament, Museveni said he fundraises to get money he gives to “my MPs” a claim, civil society activists dispute.

“If he genuinely fundraises, he should declare [where he fundraises from]; otherwise, he will leave us to speculate that he gets it from the consolidated fund because the handouts are not new,” Kagaba said.

Senior presidential press secretary Don Wanyama, however, said a sitting president can get support from foreign governments and can also fundraise from other ruling parties that enjoy a warm relationship with NRM. But he declined to say more, arguing that the law does not allow a civil servant like him to discuss partisan political matters.

Some NRM leaders have pointed to the monthly contributions to the party from NRM MPs as the source of Museveni’s envelops. Each MP contributes Shs 170,000. From its 261 MPs in the ninth Parliament, NRM got a monthly total of Shs 44.3m and about Shs 2.6 billion at the end of the five years.

The total collections from the MPs are far less than what Museveni gives in return. For instance, Museveni spent more than Shs 28.7bn to bail out indebted MPs.

“Don’t forget that we recently had a fundraiser for the NRM house, there is no rule that stops him [Museveni] from using part of that money to give us when we beg him,” Nabbanja said.

“We’re in fact moving on with the project and I will make accountability to the relevant NRM organs,” Lumumba said last week.