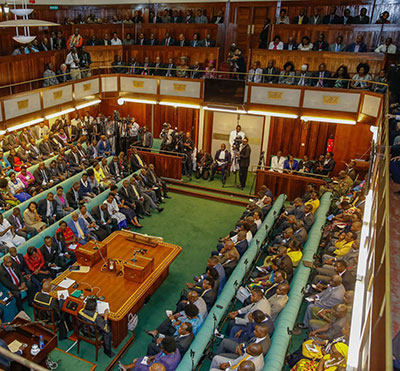 A total of 375 Members of Parliament have reportedly received Shs 5m each as sitting allowances for attending a special sitting to pass two electoral bills.

In the laws passed, parliament scrapped facilitation given to presidential candidates to finance their countrywide campaigns, while nomination fees were raised from Shs 8m to Shs 20m.

The MPs also voted to raise nomination fees for parliamentary aspirants from Shs 200,000 to Shs 3m.

For the better part of Thursday, several legislators were seen strolling towards the Office of the President, through the fourth floor of the north wing of parliament to pick the money.

Some of the legislators who spoke on condition of anonymity say the facilitation is a disturbance allowance paid out to them for being recalled from recess to attend to special duties.

This is the second pay out to MPs within a month. Recently, when legislators were recalled to consider a government motion to create 23 new districts, they received Shs 10m each in allowances.

We have learnt that the money was not paid out by the Parliamentary Commission, which is charged with payment of salaries and allowances of MPs. When contacted Chris Obore, the Director of Communications at Parliament denied the payments.

“As parliament we have not paid out any monies to MPs. I have spoken to the chief accountant who has confirmed that no payments have been made so I don't know where the money is coming from,” Obore said.

This move has not gone down well with anti-corruption activists, who describe the MPs as selfish and acting with deliberate impunity on their part.

Cissy Kagaba, the Executive Director of Anti-Corruption Coalition Uganda (ACCU), says the timing of the amendments is suspect and a move by government to coerce MPs to pass unjust laws using financial perks.

“That money would have been channeled towards provision of services in several districts. Imagine they are paid for their jobs but still want more due to greed and selfish interests,” Kagaba said on phone.

Kagaba is rallying citizens to file a public interest litigation against parliament in court to stop what she terms as gross misuse of taxpayers' money. The parliamentary commission pays a consolidated figure of about Shs 22m to MPs in salary and allowances.