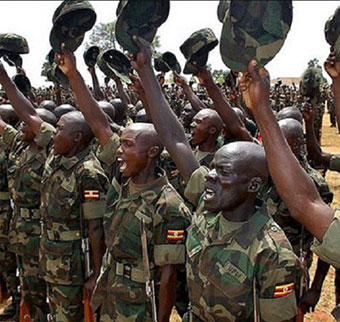 The Uganda Peoples Defence Forces (UPDF) will begin a recruitment drive today to fill close to 3000 positions in the lower ranks of the army.

The drive was announced by the army over a month ago will seek to recruit people into the private rank, the lowest rank of the army to increase its numbers of front-line soldiers at battlefronts.

Army spokesperson Paddy Ankunda says that the army has been increasing its capacity to handle national security and that is the reason for this recruitment. He also added that the force is engaged in many battles on the continent and that requires man-power.

UPDF recruitment officers will be in areas of Namutumba, Luuka, Bugiri, Nebbi, Zombo, Kitgum, Lamwo, Bundibugyo and Kibaale to carry out the recruitment exercises.

The recruitment officers will require a mandatory national ID and local council letter of endorsement from the people who will turn up for the drive. The army regularly disqualifies people with chronic illnesses and missing teeth from the recruitment.

Uganda has close to 10,000 of its soldiers deployed in missions on the continent. Part of them are in Somalia under the peace keeping force of the African Union, others are in Central African Republic under the African Union's Regional Task Force in the hunt for Joseph Kony, another battalion is deployed in South Sudan to guard key government installations and some are kept at the border with the Democratic Republic of Congo to avert attacks from Allied Democratic Front (ADF) rebels.

The deployments have stretched UPDF's internal capacity in their five divisions across the country. The recruitment will in part address that. Ankunda says that the recruitment will also seek to get 88 musicians for their brass band and 50 sportsmen for their sports department headed by Brigadier Phinehas Katirima.