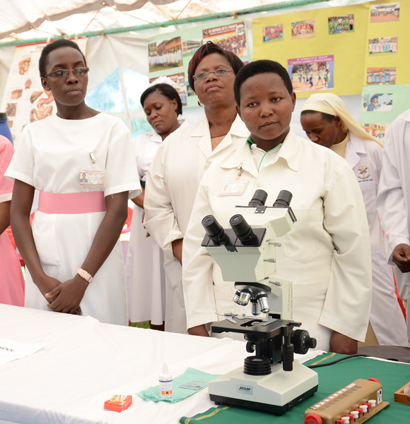 Majority of these are anesthetists, laboratory technicians, midwives and nurses. In a country where health professionals earn between Shs 400,000 for midwives and Shs 700,000 for medical doctors per month, working abroad, where remuneration is four times higher, is incredibly enticing.

For example, according to the ministry of Health statistics, in 2010, thirteen senior consultant surgeons left Uganda for Rwanda where each would earn Shs 9m monthly. In Uganda, a consultant surgeon is paid Shs 1.5m.

Recent statistics show an estimated shortage of at least 817 doctors and 9,921 nurses and midwives in the country. According to Dr Vincent Oketcho, the Intrahealth country director, this translates into a 42 per cent job vacancy rate in the public health workforce. And Prof George Kirya, the chairperson of the Advocates for Professionalism and Quality in Health (APROQUAH), is worried.

“Patients who are referred abroad often find our very own skilled health workers there. Sadly, health has not been prioritised in this country. Getting Uganda to become a first class nation by 2040 might be a dream without a healthy nation,” Kirya said during a recent dialogue of health professionals on the attraction, retention and motivation of health workers in the public health system.

It was organised by Action Group for Health, Human Rights and HIV/Aids (AGHA-U). Prof Kirya added that brain drain had a threefold negative impact on the country. It creates a, nearly unstoppable, vicious cycle of migration and hiring, drains the country of vital expertise and makes it lose its return on investment made through training and education.

The code was adopted by the World Health Assembly in May 2010, but implementation is voluntary and will, according to Prof Kirya, depend on Uganda’s efforts to address factors that cause health workers to migrate.

Despite releasing over 500 health workers into the job market every year, poor working conditions have stretched our health services, placing difficult demands on nurses and midwives in particular. Dennis Odwe, AGHA-U’s executive director, said challenges such as inadequate equipment, drugs, power outages at health facilities and difficulties in accessing health facilities in remote areas were rife.

Also, workers’ pay cheques sometimes arrive months late and there is exposure to infections when gloves are scarce. The historic passing of the 2010/11-2014/15 Health Sector Strategic and Investment Plan (HSSIP) aims to provide quality health for all in order to accelerate economic growth and reduce poverty.

To achieve this, Dr Oketcho said, Uganda would need to rapidly scale up the recommended WHO interventions of educating, diversifying and providing financial incentives for health cadres. Currently, Uganda is trying to attract, retain and motivate domestic health workers by adding mandatory fieldwork experience and modifying the educational curriculum to train health workers in various skills.

According to Francis Ntalazi, the assistant commissioner of human resource management in the Health ministry, 129 doctors were recruited to work at health centre IVs during the 2012/13 recruitment exercise.