Three former UBC bosses have filed a petition in the Constitutional Court seeking to quash the charges they are facing in the Anti-Corruption Court. Chris Katuramu, Edward Musinguzi Mugasa and Emmanuel Emoru say they were “unlawfully” directed to vacate their offices and that the dossier on which prosecution based their charges was “concocted” and “false”.

Katuramu (Chairman Board of Directors), Musinguzi (Managing Director) and Emoru (Secretary to the Board) were on December 13, 2011 charged with abuse of office in the Anti-Corruption Court. They now argue in their petition to the Constitutional Court that, contrary to section 11 of the Anti-Corruption Act, they were accused without “a charge sheet defining the offence.” This, they argue, is also inconsistent with articles 20(1,2), 28(1),3 (a), 44(c) and 45 of the constitution.

The constitutional petition no.1 of 2012, a copy of which The Observer has obtained, was filed by the trio through M/S Akampumuza & Co. advocates under Article 137 of the Constitution on January 4. The Attorney General, Uganda Broadcasting Corporation, Dickens Kagarura and Paul Kihika, the acting Managing Director of UBC, are the respondents.

The petition also states that the Anti-Corruption Court magistrate, Emmanuel Baguma, insisted that they take plea on vague charges even when their lawyers insisted that they follow the standards required by the constitution. In the end, the trio argues that they were grouped under one charge yet they held different offices with different functions and mandates.

“It is not practically possible that the three could have abused the authority of the same office, which we do not hold jointly. Charges are selective,” the petitioners note.

The suspended trio also want the Constitutional Court to pronounce itself on section 168 (4) of the Magistrates Courts Act which they say interferes with the judicial discretion in bail matters. The petitioners allege that Kihika and Kagarura are “impostors that authored false and anonymous dossiers to politically persecute and malign [us] for having performed their work.”

The Observer has learnt that in a dossier tabled before President Museveni on December 25, 2007, Katuramu is accused of stealing a UBC mast from Mbale and taking it to a site in Kilembe where he was reportedly constructing a mast for Voice of Toro radio. The mast was recovered by police, but Katuramu picked it again and took it to Kilembe, the dossier stated. It added that Katuramu stole another mast in Mityana and also procured a junk UBC Outside Broadcasting van from Europe.

The author of the dossier, basing on these allegations, recommended that the President orders for a commission of inquiry into corruption and mismanagement in UBC. The author also urged that the corporation’s board and MD be suspended.

According to the petitioners, Kihika, who is now MD, used the “malicious and unsigned” dossier as a stepping stone to the UBC top job. They want the court to declare his appointment unconstitutional because it contravenes the UBC Act. UBC is a statutory body created by an Act of Parliament. It is this instrument that gives powers to the Board of Directors to appoint the MD. However, the board was suspended on May 20, 2011. The petitioners argue that the affairs of UBC continue to be run without a board of directors, which is “unconstitutional and illegal”.

The petitioners add that the police found the allegations against them false, but the board members and the MD were irregularly kept on suspension for seven months now, in violation of the constitution.

“Kihika lacks the competence and could not be made the MD of UBC,” the petition states.

Expounding on Kihika’s perceived incompetence, Emoru, a lawyer who was appointed secretary to the UBC board on November 27, 2008, says he was sent on forced leave when he refused to sign contracts of employment for over 30 people, including those in managerial positions, recruited by Kihika without job advertising. These reportedly included Human Resource manager, Fernard Kitumba; Finance and Administration manager, Ruthra Kamukama; TV manager, Tony Owana, and Paul Mugambe, the Manager of Star FM, among others.

“These appointments were unconstitutional,” Emoru says in his affidavit.

Katuramu, a lawyer who was appointed chairman of the board in 2005, says in his affidavit that Kihika showed interest in the job of MD in 2006 and 2008, but was found wanting. Prior to his suspension, Katuramu was reappointed MD in 2009 by Kabakumba Labwoni Masiko, who was then minister of Information and National Guidance. She recently resigned over allegations of using a UBC mast and transmitter for her private radio, King’s FM, in Masindi. Katuramu’s term was supposed to end on January 1, 2014.

A form showing how the board of directors sieved candidates for the post of UBC Managing Director in 2008 indicates that Kihika was “eliminated” because he “lacks basic qualifications”.

The other contender, Francis Onapito-Ekolomoit, the documents state, “has experience in media with plenty of exposure with high-level partners… [but] experience of management at corporate level not evident”.

On Edward Mugasa Musinguzi, who finally took the job, it states that he “has very long experience in a corporate body”.

The petitioners also find it baffling that they were subjected “to a criminal process for having performed their duties diligently and earned the UBC income of Shs 11.5 billion”. This money was “authorised and paid to UBC accounts by government through Bank of Uganda”.

Yet instead of toasting to the Shs 11.5 billion they bagged for UBC, the trio states, they were charged with abuse of office for selling the corporation’s land in Bugolobi to Haba Group (U) Ltd, a company owned by Hassan Basajjabalaba. It’s alleged that the trio sold the land without following established disposal procedures. Katuramu says this allegation is “vague and victimising”.

The plots in question are FRV 211 Folio 18 on Faraday road, Bugolobi. Board meeting minutes of January 7, 2011 show that Katuramu called the meeting to specifically consider a letter written by Pinnacle Projects Limited on November 15, 2010 in which they indicated that the project of developing UBC land on Faraday road at Bugolobi had become too costly and that Pinnacle had written to UBC, indicating that they had assigned the project to Haba Group Limited.

On its part, Haba Group wrote to UBC on December 3, 2010, offering Shs 11.5 billion to purchase the land. The UBC board resolved that Pinnacle could not develop the land, and they considered the offer by Haba Group. The land had been valued by government at Shs 11.2 billion, which essentially means that Haba Group was offering more money to UBC.

In their petition, the complainants have also attached a letter written by Kabakumba, giving them a go-ahead to sell the 18-acre piece of land to Haba. Written on April 8, 2011, Kabakumba states: “In accordance with section 6(a) of the UBC Act, I hereby approve your request to dispose of the 18 acres of UBC land on Faraday road, following failure of Pinnacle to successfully execute the project to enable UBC fulfill its mandate. Ensure value for money”.

In its five-year plan, the corporation undertook to divest itself from noncore assets in order to invest in core activities.

The petitioners also table a letter written by the Governor of Bank of Uganda, Tumusiime-Mutebile, titled: Haba Group Ltd. Payment of Shs 10.4 billion to Uganda Broadcasting Corporation. Writing on January 25, 2011, Mutebile says: “I am writing to confirm that Haba Group Limited, of P. O. Box 20000, Kampala, has receivables from the current Government of Uganda to the tune of Shs 96 billion which will be paid to Haba Group within the current Financial Year.

“The minister of Finance, Planning and Economic Development, has confirmed that these funds will be paid to Haba Group through Bank of Uganda. The Bank of Uganda hereby states unequivocally that it shall, within 120 days, deduct from the aforesaid receivables and pay Shs 10.4 billion into UBC account with United Bank of Africa (U) Limited, Spear House, Jinja road, Kampala, in two installments as follows: First installment of Shs 5.5 billion within 60 days from the date of this letter; the balance amounting to Shs 4.9billion with in 60 days after the first installment.” 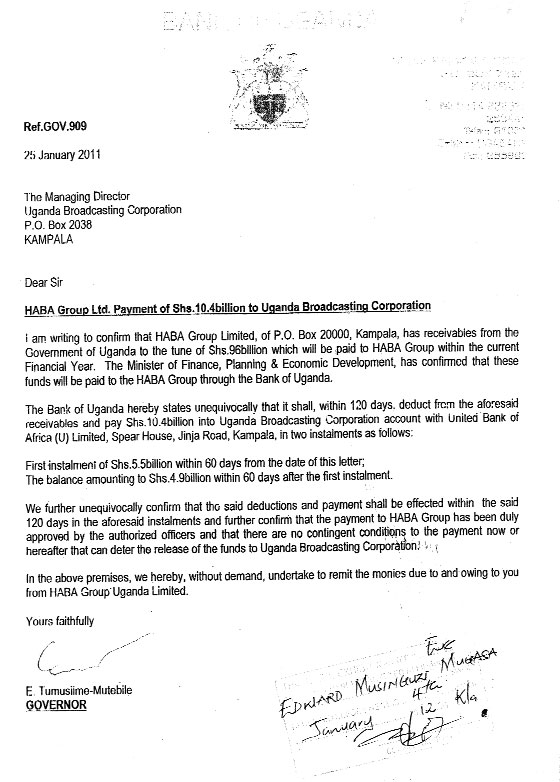 One of the petitioners, Musinguzi Mugasa, a lawyer, provides two letters from the President showing how Museveni directed ministers to give away UBC land. First, a July 19, 2010 letter the President wrote to the minister of Information shows that he authorised the allocation of 10 acres of UBC land at Kibira road industrial area to M/S UGAPLY industries limited.

“I have received a petition from the above-captioned company seeking to be allocated 10 acres of land for investment at Kibira road Industrial Area…
“I therefore suggest that the land identified could be allocated to the company to enable it expand and sustain its operations. However, first find out from UBC what they want to use the land for in the medium time,” Museveni wrote.

In another letter dated April 1, 2011, Museveni directed for the reallocation of the former external service of Radio Uganda land at Dakabela and the adjacent forest reserve near Soroti town to Teso University.