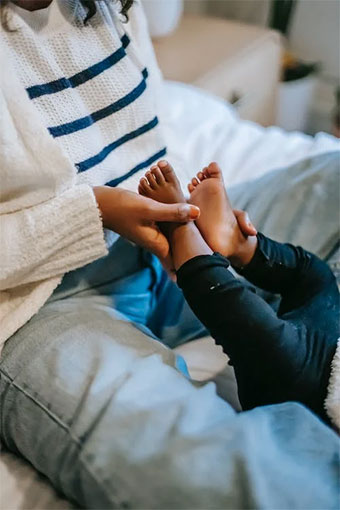 When David showed up unannounced that Monday morning demanding that Junior and I go for a ride with him, I had no idea what was going on.

From his cold demeanor, my initial suspicion was that he had somehow found out about us having spent the day at Kenneth’s place, and was driving us back there to hash it out with Kenneth, but from the direction we took, it was soon apparent that was not the case, and at that point I was completely clueless about where he was taking us.

When he pulled up in front of a medical center, my confusion instantly turned into panic; had something happened to my mother or sister?

“David, what’s going on? Did something happen to my family? For goodness sake, tell me!” I demanded, my voice raised and shaky.

“Nothing has happened to your family,” he quickly reassured me, then paused and took a deep breath before going on: “I want a DNA test done on Junior.”

It took a second for his words to actually register, and when they did, I felt like I had been punched in the gut.

“What! Are you crazy? You know he’s your son; what the hell do you want a DNA test for?”

I demanded, my tone once again changing from panic to rage.

“I don’t know anything anymore; I didn’t know you and that doctor were getting all hot and heavy, but you are, aren’t you?”

“What?”
“Don’t bother denying it; I watched the surveillance footage. Now all I want to know is if I’m even Junior’s father.”

“But that’s crazy! I didn’t even know him when I got pregnant with Junior!”
“I don’t know that. Maybe you two have been taking me for a ride all this time.”
“You can’t possibly believe that!”

“Like I said, I don’t know anymore, which is why we’re here – to find out the truth; so, let’s go do that,” he answered, and then without bothering to wait for me to respond, he got out of the car, leaving me with no choice but to follow him.

Julie was absolutely livid; so, it was a good thing I had managed to get her there without revealing the purpose of our trip, for I don’t think she would have come along.

However, once we were there, there wasn’t much she could do about it; so, she resorted to falling into a stony silence that she maintained both at the center and throughout the drive back to the apartment.

When we got back to the apartment block, she climbed out of the car with Junior, slammed the door shut behind her, and without so much as a backward glance stalked off towards the entrance.

I did not follow her; there was no point, because there was nothing to say until we got the results, which we had been told would take at least two weeks.

Of course at some point we would have to talk about her affair with the doctor, and how she had deceived me about that, regardless of the DNA results when they came out – but now was not the time.

If Junior was my son – which in my heart of hearts, I truly believed he was – then that would give me the authority to demand she breaks it off with the doctor and kicks him to the curb. However, if he wasn’t mine, then she could keep the doctor, and it would be me kicking her and the child I had invested so much of my time, money and emotion on, out of my life.

It was a thought too painful to put into words.

I followed David’s car at a discreet distance until he turned off at a medical center signpost. I drove and parked a few meters ahead, so that I would be out of sight when he exited.

My heart was racing with a mixture of nerves and excitement as I waited, but thankfully, I did not have to wait too long, as about half an hour later, I saw his car drive out.

I waited till it was out of sight, then drove into the center. It was small and not particularly busy, but the receptionist clearly bored by her job, simply pointed me in the direction of the lab when I asked for it, without even asking what I was there for.

Things only got better when I found the lab manned by a tired-looking woman who appeared to be at least ten years older than me; just the sort of person I believed I could bring around to my way of thinking.

“Order slip,” she asked as I walked in.
“I don’t have one – I actually wanted to see you,” I answered meekly.

This caught her attention, and she looked up at me curiously; “Me? What for?”

This was it, and I got straight to the point.

“There was a couple in here with a baby boy a few minutes ago, for a DNA test; tall man with black trousers and a light blue shirt.”
“Yes?”
“He’s my husband,” I announced simply.

“Oh,” her eyes widened with surprise and then understanding.

“How can I help you?”
“The woman with him has wrecked my home; he has abandoned our home and children,” I said with such forlornness in my tone, she could not help but believe the lie.

“I’m sorry to hear that, but how can I help?”
“My only hope to get my children their father back is for the results to show the baby isn’t his.”

“Eh madam; I don’t think I can help with that,” she shook her head nervously.
“I think you can.”

“Madam, I would lose my job if I was discovered.”

“I understand that, but I’m sure you could find a way to ensure that doesn’t happen and I would make it worth your time.”

“I don’t know,” she continued to shake her head.

It was time to make my next move and opening my handbag, I pulled out ten crisp fifty thousand shilling notes and set them on the counter in front of her.

She stared at the money, and then looked up at me slowly, then back at the money. I knew I had her, and to seal the deal, I pulled out another six notes and added them to the untouched wad.

Her eyes grew even wider, and this time, she snatched up the cash and slipped it beneath her lab coat as though she were scared it might disappear or someone might walk in and see it.

“I’ll see what I can do,” she whispered shakily. “Thank you,” I smiled, then stood up and walked out.