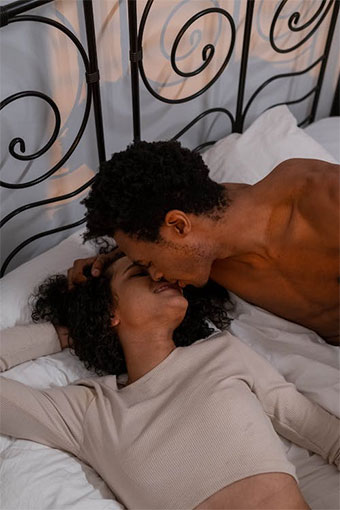 Scrolling through the footage from the security cameras, I focused on two that covered the front door and living room areas, and it was not long before I found what I had been afraid of.

When that doctor first appeared on the screen, it felt like I had been stabbed in the gut, and then as I continued watching the footage and saw him touching Julie, then kissing her, it was like that knife was just being twisted deeper, and I felt physically sick. I did not want to believe my eyes, but there was no denying it; Diane was right. Julie and that doctor were having an affair.

I remembered how vehemently she had denied Diane’s allegations, and how guilty I had felt for attacking her over what she insisted was a pack of lies, but watching the footage now, it was clear that she was the one who had been lying, not Diane. I felt like the world’s biggest fool for ever having believed her.

While it was infuriating to watch her with that doctor, it was more hurtful to watch him with Junior. My mind went back to how fussy Junior had been with me; how he would not stop crying and struggling to get out of my arms, and then compared it to how comfortable – even happy – he was with the doctor.

I was pretty certain Junior was my son, and that Julie had not even met this bloody doctor when he was conceived; but what proof did I actually have that he was mine?

After all, Julie had lied to me about the doctor; who was to say she was not lying to me about Junior as well?

Perhaps it was time to consider Diane’s suggestion that I ‘cross my t’s and dot my i’s’.

As the day progressed, the girls continued to chip away at David’s foul mood, and by the time lunch was served, he appeared to have put whatever had happened at the apartment behind him, and had warmed up not only to the girls, but to me as well.

After lunch, the girls took their play outside, and Daniel went up to his room to finish his homework, leaving David and me to ourselves. When he moved to the living room, I followed him, and although he had not asked me to join him, he did not send me away either. We sat in silence for a few minutes, him flipping through the TV channels, me waiting for him to say something, and finally he did.

“You were right about me needing to crosscheck things I’ve been told,” he said quietly.

Sensing that he was building himself up to a major announcement, I held my breath in nervous anticipation, and at my silence, he went on.

“I heard about a clinic that does those tests; so, I think I’ll take the morning off work and check on it.”

I had done it! My plan was coming together beautifully, and I was so excited I could barely breathe, let alone speak, but I managed to maintain a calm, almost indifferent tone as I answered.

“I think that’s a smart thing to do,” I nodded my approval.

With that settled and decided, David seemed eager to change the subject.

“Are you still on for going to visit my parents over the weekend?” he asked hopefully.

I had completely forgotten about making that suggestion, and now sorely wished I had not, but now was not the time to rock the boat; so, I forced on a bright smile.

In truth, I had only one thing on my mind – David was going to get the test done the following day, and I somehow had to figure out where he was going to do it, and how to ensure he received the ‘right’ results.

The day with Kenneth was comfortable and laidback; we played with Junior, and when he dozed off, Kenneth and I cooked, the limited square footage of his kitchen ensuring that we were constantly in each other’s space and ‘accidentally’ bumping into each other.

The physical chemistry between us was undeniable, but there was a lot more between us than just the physical attraction, and the longer we spent together, the more I saw how similar we were – and how different he and David were.

The most obvious of those differences was obviously that unlike David, he was not married with a whole different family, but there were lots of other small differences as well; like, the way he could not seem to get enough of being around me, how comfortable he was with expressing his feelings, and how good he was with Junior. That all combined to make it feel like we were a better match than David and I had ever been, especially now when things were as strained between David and I as they were.

Part of our compatibility was no doubt our similar social class background, but the closeness in our ages probably played a part in it too. Although the age gap between David and I was not large enough for him to be considered a ‘sugar daddy’ or anything like that, he was still from an era that had clear-cut male and female roles; so, unlike Kenneth, he was not a ‘modern’ man who got involved in the cooking, or was ‘hands-on’ in the childcare department either.

Ironically, before Kenneth and I had gotten close, I hadn’t even known I wanted a ‘modern’ man; I had been raised to believe a woman took care of the home and children, while the man provided for the family, and maybe that was part of the reason it had been so easy to slip into an affair with David; he was definitely a ‘provider’ and I was happy to stay in the background and take care of the home and child that he had given me.

However, time with Kenneth had shown me a different way, where men and women were partners, and now the ‘traditional’ relationship that David and I had was slowly beginning to lose its appeal.