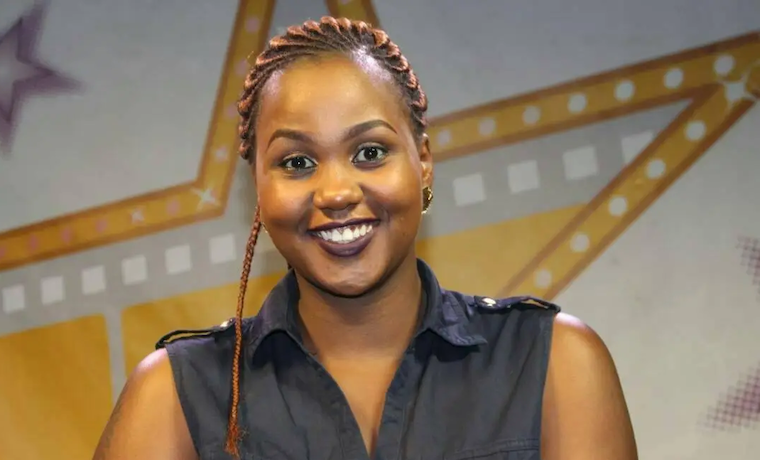 After quitting the show in 2020, she moved to the USA where she still does her show on her YouTube channel. Quick Talk talked to her about her time on TV and what she is up to.

How are you over there?

I am doing very well, I can’t complain. I am still living the same life.

How would you describe yourself?

That would be very subjective. I don’t think I can describe myself per se, but I am a very basic person, fun-loving, an introvert in a weird extroverted way. I keep to myself, because I find humans insufferable most of the time, but I still love humanity.

I wouldn’t say that. I think the word is used inappropriately. Having a spark for life, being curious, open-minded and not following the status quo doesn’t necessarily mean someone is stubborn. It means I want to explore, I am inquisitive and I have questions.

Why the “Fierce” in your name?

I actually never used to go by that name. When I started my TV career, I was just going by Tina but after a year, one of
my friends was helping me open up a Facebook page and she said she wanted a name that would suit me. So, she came up with ‘Fierce’ and I kept it.

Do you miss being on TV?

[Promptly] Hell no! [Laughs]. I do not miss being on Ugandan TV. Elsewhere I think I can do it again, but when it comes to Ugandan TV, the nitty gritty behind the scenes; the lazy producers and CEOs, the poor payment, trying to keep up appearances for the crowds but your finances don’t match up... In East Africa, I think Uganda pays the least amount of money to its on-air personalities.

You were very controversial and outspoken while on TV. Didn’t you ever get scared of rubbing big people the wrong way?

What people considered controversial were just plain, simple facts. So, it wasn’t controversy but it was about being brutally honest and because it was the truth, that is why you never heard anybody beating me up. Actually, some of these celebrities would reach out and say, “I watched the story; you were a little bit harsh but I get where you are coming from.” And that always humbled me.

Are there any celebrities who threatened you?

Not a single one. The ones that came were not directly to me but through my producers and some were legal which would be dealt with legally. You all idolize our celebrities so much but they are plain. If there is any time anyone tried to call me out, I would be open enough to talk about it on TV and tell the whole world what you did.

You hardly had anything positive to say about anyone.......

No, I was actually objective. It was people’s mindset that was negative because they were hell-bent on seeing only the negativity. Every time I said something about someone, at the end of the conversation, I offered a solution. I would throw all the shade but at the end of it all, I would tell the celebrity how they have gone about the situation in question. But, unfortunately, in most cases people would only concentrate on the shade thrown.

Is there anyone you talked about and later thought maybe you might have gone overboard?

Never. In that moment while I am doing that story, that is the story that is there. That was the job I was being paid to do. Ugandans were confused and thought I am my job but I was just so good at it. That’s is why I was at Vision Group for six years.

I was paid to do a job that I was exceptionally good at. Actually, as soon as I would get off set and you asked me what I had talked about, I would have forgotten it because it wasn’t personal.

But do you have any celebrity friends?

You will be shocked. I am not one to drop names but you would be shocked at people who have called me and talked to me in person, those I have sat down with and had conversations, those who have texted me and we chat comfortably. Some celebrities actually understood the necessity of what I was doing because it would gain them traction.

I think that is a story that every Ugandan likes to have. But she is just a young girl who is running around trying to seek out this thing called life. You all give her too much attention and that is why she runs around self-entitled. For me she is not a consequence; she is very inconsequential in my world.

When I went off TV, everyone made it about her, that she was the reason behind it, but I went off TV because of politics. By the time [Sheila] and her entire gang made noise, I had already signed papers to quit because I was not going to apologize to the Kavuya family.

So, you left TV because of politics?

Oh yeah. I refused to apologize to Ben Kavuya and Sam Kutesa after I criticized the government for allowing Kavuya repatriate his family members into the country during lockdown, when such travels had been banned by the government.

The media council wrote to the station demanding that I apologize within seven days, which I refused to do and got off the show.

What are you up to now?

I am living this whole beautiful thing called life and I am loving every minute of it. I am newly married and I have got children. I am in a new country, exploring it, learning new tricks and trades and simply enjoying it.

By the way, congratulations on your marriage...

Thank you very much!

So, how did you meet your husband?

We dated for two years. He was actually a fan of the show for years before he even talked to me. He was always in the comment section and then he finally reached out to me and the rest is history. Here we are now.

How did he manage to woo a feisty woman like you?

You see, Ugandan men are intimidated by an opinionated woman but in other parts of the world, most men are looking for a woman like me because they know she is going to be on top of everything; she is going to have an opinion, and not be a bimbo [her husband, Tano Teka, is Kenyan]. But that does not make me unlovable; I am actually the coolest person. I am a teddy bear and very calm.

And you took on his last name?

Yes, which woman in Uganda gets married and keeps her last name? Not taking the last name is mostly for whites where a woman would probably decide to keep her last name because she has a business or legacy tied to it. But everywhere around the world it is okay to take a man’s name and it is okay for him to take my name too.

Will you come back to Uganda sometime?

I have permanently relocated here. I have moved here and gotten married. But I have dual citizenship and I can come back home anytime I want, but I now have to build a whole life here.

I did my time in Uganda, thank God for it, but now I am in another place and I am going to also do my time here. Uganda will always be my home and I can come and go as I please.