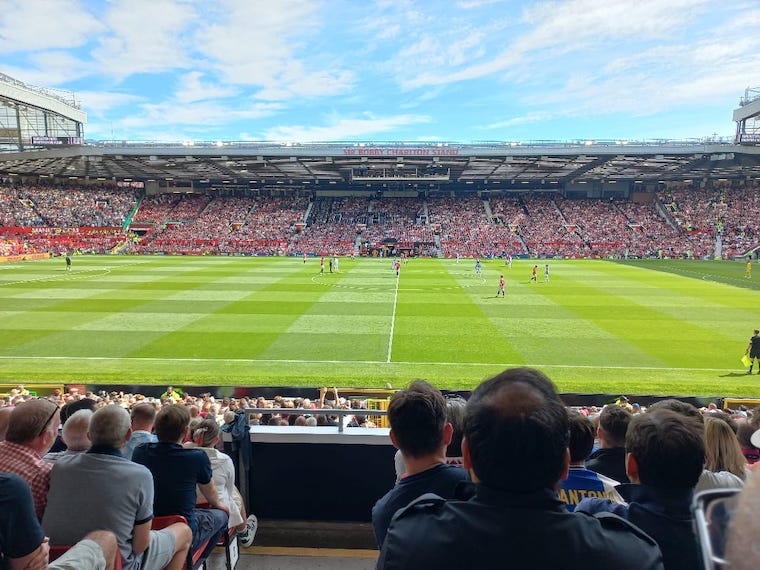 Scene during a football game

UNITED KINGDOM - The big announcement had filtered through early in the week. Cristiano Ronaldo was going to play against Spanish side Rayo Vallecano in Man United’s final pre-season friendly at Old Trafford before the beginning of the new season.

That development was such a thunderbolt that tickets for the game, a truly meaningless one, sold out in a blink of an eye. You can credit that ticket sell-out to the new Dutch manager Erik Ten Hag, the passionate fanbase of Man United, an insatiable appetite for football from fans who had been starved of the game in the off-season or in most likelihood the cult status of the man himself, CR7. 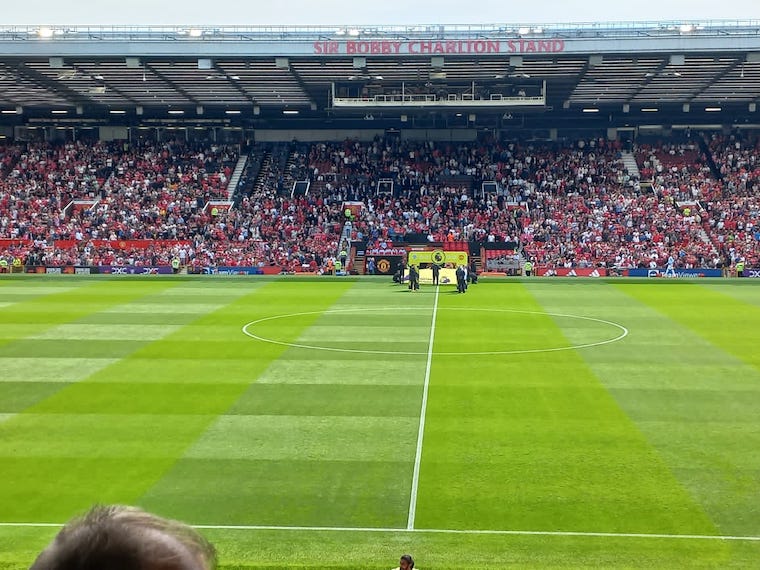 Up until that friendly, he had expressed a keenness to depart the club. Speculation over his future was rife, it still is even today one month later, but when it comes to the stardust around his name, only Lionel Messi compares. To watch the Rayo Vallecano friendly, I boarded a one and a half-hour train from Birmingham’s New Street train station to Manchester’s Piccadilly.

In our carriage on the train, I travelled with a few Ugandan journalists and friends living and working in the UK, it was clear that the final destination in Manchester for a good number of those on board would be Old Trafford.

Fans wearing replica shirts of Man United were all over the place and by the time the train reached Stockport, one of the last stops before Manchester Piccadilly, the train had turned all-red.

First, we elected to make a stop at the Etihad; home of Premier League champions Manchester City. The Uber driver who drove us, a sworn Man United fan, told us that Red Devils supporters refer to the place as ‘Shitty-had’.

The Etihad, built for the 2002 Commonwealth Games in Manchester, may be relatively new in the country but it has forged its own unique story and history most encapsulated by Sergio Aguero’s 96th minute stoppage time winner for the Cityzens against QPR that handed the ‘Noisy Neighbours’ their first top division Championship title in 44 years.

The entire stadium is draped in blue which imaginative sky-blue faded photography and artwork highlighting the club’s most glorious moments in history. We did not do a stadium tour of the Etihad, and I particularly was not too keen on this detour not least because I had been there when a 10-man Man United side beat City 1-0 thanks to a Wayne Rooney goal in November 2008.

But we were wowed by the club’s megastore. The one thing about the megastore of every club is that you will find something you will admire even if the club is not one you support. Club caps, scarfs, jerseys, towels, rucksacks, track bottoms, cups, plates and key holders are among the various items for purchase.

The one challenge with buying megastore merchandise is that prices are usually steep, largely because the targeted clients are football tourists from particularly the far east. The items in a club’s official shop cost more than when purchased from sports shops like JD and Sports Direct.

I did buy a Man City school bag for my daughter who supports the reigning English Premiership champions at a cost of £25 (Shs 113,000) only to find the same bag in a Sports Direct shop in London for £20 (Shs 90,000). Yet there are dyed-in-the-wool fans who will swipe their cards in thousands of pounds to buy club merchandise without hesitation.

As I queued to pay for my girl’s school bag, a Man City-supporting family ahead of me spent £1,645 (Shs 7.4m). From the Etihad, which is situated in the east of the city of Manchester, we took an Uber to Old Trafford.

The culture of match days in England is synonymous with road closures, metropolitan police deployment, mounted police and human traffic. Even for a largely hollow match between Man United and Rayo Vallecano, the authorities are always on standby to ensure law and order.

With a capacity of 75,000 fans, Old Trafford is the largest club football stadium in the United Kingdom and eleventh-largest in Europe. Built in 1910, it has hosted Fifa World Cup matches, Uefa European Championship games, the Rugby League World Cup and Olympic tournament football. Arriving at Old Trafford stadium for a first time, you are met with a salient wave of history.

The road leading to the stadium is named after one of the club’s greatest managers Sir Matt Busby. Outside the stadium are statues of the legendary manager Sir Alex Ferguson, who incidentally also has one of the stands inside the ground named after him.

There is also the United Trinity statue of the club that features three of the club’s finest-ever attacking talents in George Best, Bobby Charlton and Denis Law. The statue, which sits right opposite the megastore, is a favourite photo area for football tourists of the Red Devils.

The Manchester United megastore is almost twice the size of that of Manchester City and attracts thrice the traffic. It is not really a surprise considering that United remains the much bigger club both in success and fanbase, despite the fact that City are easily the better football team today.

The most common replica jersey being worn is that of CR7, which is to be expected. But there remains a section of fans still firmly attached to the club’s glorious past and the names of Eric Cantona, Roy Keane and Ryan Giggs are among the shirts visible on the day.

The match itself was a bore, with neither side really threatening to win. Ronaldo would play only one half but his every touch was met with boos by some fans still unhappy that he has expressed a determination to play Champions League football elsewhere.

Amad Diallo scored United’s opener which was cancelled by Alvaro Garcia Rivera’s neat finish to ensure a stalemate.
There are certain routine things I noticed at every English stadium that are not really news in Uganda, but do stand out for me who grew up watching the Uganda Super League, later renamed Uganda Premier League.

The professionalism of match-day stewards is something I watched in awe time and again; I still don’t understand the kind of training a person must undergo to ensure that he spends 90 minutes sitting or standing with his back to the stadium to watch fans and be on the look-out for any misdemeanours and bad behaviour. It is a job I would fail to do on the very first day!

And then there is the booze culture at matches. The fans love their drink before kick-off and at half-time. Win or lose, they will drink. And they drink in significant volumes.

There is order on the queues for drinks and bites; they line up without anyone inconveniencing the other. The same habit is extended to the restrooms, which are always clean.

What is very apparent is that clubs as professional as those in the English Premier League understand that fans are the kings of their product – that is football. The clubs ensure that fan safety is paramount and the service extended to them inside the stadium gives them sufficient reason to return.

And lest we forget, the bulk of them are season-ticket holders. So, they do have a major say in the way the club is managed.

At full time the 75,000 fans left the stadium without a hint of confusion or commotion. The Trafford tram ferried fans to their various stops while others walked to their bus stops and car parks located a significant distance from the stadium to manage traffic.

The police remained vigilant until the stadium had all but emptied, allowing them to re-open the access roads around the grounds.

A week later, I returned with my friend Mark Ssali, Youth MP Hon Agnes Kirabo (a Liverpool fan) and Brighton Barugahare for the match between Manchester United and Brighton & Hove Albion. It was the opening match of the Premiership but we watched in dismay as our beloved team was humbled 1-2 by the visitors.

This was a more vociferous atmosphere, considering that the game was a competitive one and the new manager Erik Ten Hag was desperate to hit the ground running in the new season.

I sat in the north stand, almost ten rows to the touchline and had a first-hand glimpse of the limitations of the club’s skipper Harry Maguire. But what will linger in my memory is that the gentlemen who sandwiched me on both sides, and front and back, appeared to have flown in from Asia to support Manchester United.

The game of football is a lifestyle in the United Kingdom, one they have successfully exported to the globe and raked in billions of pounds cumulatively over decades.