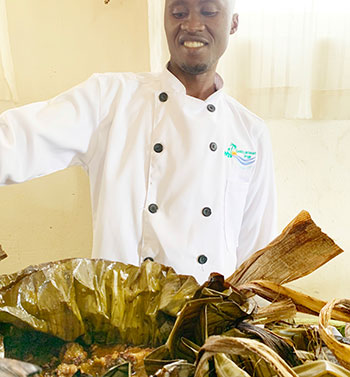 There was a time when Kenyans dominated the top echelons of the hospitality sector but in recent years, chances are high that if you go to a Kampala upscale hotel or eatery, you will find a particular type of people working there.

The same goes for restaurants and tourist resorts countrywide. Yes, they are distinct because they are Bakonzo! Right from managers, chefs to waitresses. Why? They have become renowned for having excellent customer care and for being focused on their job.

As SAMUEL MUHINDO writes, the resourcefulness of the Bakonzo in the hospitality business is not just an overnight sensation. For some time now, the Bakonzo from Kasese are quietly creeping to become Uganda’s most hospitable communities if the new trends are to go by. You may have interacted with a Bwambale, Mumbere, Baluku, Kule, Biira or Masika in your favorite hangout.

A hospitality sector that has for long used to be dominated by Kenyans seems to have found Bakonzo mastering their art in the field. They are everywhere and it is hard to find anyone complaining about their influx in the sector.

On a recent visit to Speke resort Munyonyo, a staff who preferred anonymity confirmed there are more than 50 Bakonzo working at the hotel and more expected in the next few months. She said the Bakonzo were the most preferred for employment owing to their grit and resilience when at work.

She also intimated that if one did a survey, it is easily discoverable that most of them working in these hotels are products of CELAK Vocational College in Kasese. She added that CELAK equipped them with international languages, especially French and German, adding to their already trusted training in the hospitality sector.

This, she said, has helped them to compete favourably in the market. Ahmed Tariq, the manager of Haandi restaurant located along Kampala road, said that they had recruited some staff from Kasese majorly because they (staff from Kasese) were hardworking, resilient, and patient.

Tariq likened Bakonzo’s understanding of hospitality to the Kenyan mentality of responsibility. “I have five boys from Kasese but they are committed to what they do. Unlike most of our other Ugandans who will disappear after receiving their salary on the 30th of every month, these boys are very committed. I think it is because most of them have commitments back home that put them in line.”

The Observer had a sit-down conversation with Eri Thembo Nyakango the proprietor of CELAK Vocational College at their premises in Kasese. According to Thembo, the school famed for producing Uganda’s hospitality community traces its start to humble beginnings.

The school was established in 1993 in fulfillment of his father’s dream and desire passed to the young generations through folktales. Asked how they started the school, Thembo said: “My father used to tell us old stories of how he met stranded tourists in Virunga national park (in the present-day the Democratic Republic of Congo) during his youth around 1930. Just like my father, the tourists had gone to the national park to hunt animals.

In his senior six in 1987 at Saad Memorial School, Thembo and friends visited Mweya Safari lodge for their senior six class leavers’ party. It was during the leavers’ party that Thembo and some friends opted to go for a ferry cruise on the Kazinga channel.

He added, “Before the ferry could set off, a group of white men came to the dock. They were speaking English. They wanted to know the program of the ferry but the Kiswahili-speaking managers of the ferry could not understand. I stepped in and interpreted for them. The white men went back very happy. I confided in one of my friends Deus Kule Mutabazi that the incident with the whites had reminded me of my father’s stories and his experiences with stranded whites. I informed him that the whites had motivated me to open up a language and tourism school so that I could help the stranded tourists.”

After his form six, Thembo proceeded to the Institute of Teacher Education Kyambogo now Kyambogo University where he pursued a diploma in Education of French double main. Together with a team of other teachers of French from across Africa, Thembo visited Burundi University for a refresher course in French on a scholarship offered by the embassy of France in Uganda.

He said the short discussion with the rector of Burundi University became the eureka moment that triggered the establishment of CELAK.

He added, “When I was talking to the rector of Burundi University, he told me how the university started. It started as a Center for Learning Languages in Burundi (CELAB). I told him I would start CELAK (Center for Languages at Kasese) for Kasese upon my return to Uganda. He took me to his friends and they encouraged me to proceed with CELAK. I told him that I would establish a tourism school offering international languages. We laughed it off.”

In February 1993, CELAK started by offering Kiswahili, Lhukonzo, and French. In May 1993, CELAK, introduced a catering and tourism course to accompany the language center.

He said, “Upon starting, we wished to make CELAK an international model vocational training institution that offers practical skills and international languages for sustainable development”.

Asked why they had decided to offer languages and vocational skills in one package, Thembo said, “We wanted to properly guide the stranded people. If you applied to CELAK either for a tourism or catering course, it is a must to add an international language. We then offer them the basics of German. We then encourage students to learn different local languages when interacting with colleagues at school”.

Thembo said that he had partnered with local hotels around Kasese municipality to provide proper hands-on training for their students during their period of study.

He added, “When we talk about catering, we teach other areas like hotel management because these are not secluded. You cannot specialize in cooking and ignore managing a hotel. What then happens when the manager is not there?”

Asked whether CELAK had achieved the dreams of their founders, Thembo said they had partly achieved with their eyes now set on establishing a university with a speciality in hospitality encasing areas of tourism, hospitality and management, among others.