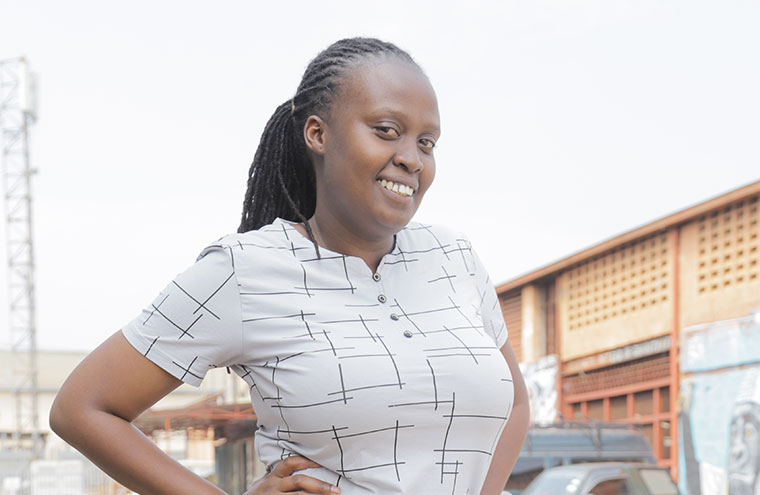 In a post-pandemic world, the art scene is trying to regain its footing. Thanks to creative minds on the frontlines, the future looks promising.

Graphic artist and painter Dianah Bwengye is making bold moves. Residing in Ntinda, this 34-year-old Ugandan from Kabale is reaching art world insiders and outsiders alike with how well she uses her talent.

From a close-knit Bakiga family, Bwengye was a good but sometimes rebellious sister who preferred the top bunk and, as a girl, ordered and organized her classmates as a monitor. Her early abilities to translate her inner vision to the world were obvious.

At Bweranyangi Girls School where she boarded during her teen years, Bwengye gained a strong sense of solidarity with other women.

“You knew the other girls had your back, like a sisterhood.”

Bwengye lends her talent to a wide variety of unexpected places. The graphic “Embraces at Bedtime” is an accompaniment to a poem referring to the abuse of girls and the echoes of that, that claw deep into adulthood.

The narrator, now a mother, is triggered by helping her daughter to bed. In this powerful image, the words of the poem swirl around her as a shadow lurks from a doorway, which is supposed to be closed.

In addition to being an exacting technician with a tablet and stylus, Dianah Bwengye is deeply rooted within traditional media as well. Her drawn and painted portraits took on a new life during her Master’s degree program; a professor commented that the work reminded him of Mexican artist, Freida Khalo. Bwengye had little idea about Khalo’s work but her own portrait’s direct stares and immersive organic motifs connect to an unconscious collective.

“Hope” is a gifted, commissioned portrait for a close in-law of Bwengye. The patron is the subject’s husband who supplied a photo to aid creation of this painting.

“She [the subject] was surprised with the painting when they returned from their honeymoon. She was so happy with this gift, she gave me money afterwards!”

Figures surrounded by plants are a staple in Bwengye’s repertoire. The entire canvas has a soft, diluted, light green under-coat with denser pigments expertly layered over it. The large flowers in the foreground offer a bold and painterly frame of the finely detailed face, done with tiny bush strokes and glits of delicately placed oil pastel.

“My father is a hippy environmentalist and into traditional medicine”, she says fondly. Herbs ground into powders, pills and potions were the norm in her home when growing up. From their father, it was understood that knowledge of healing plants was the preferred choice for ailments.

“My father said one could get healing just from walking on the grass,” Bwengye said, and the old man was not wrong. Bwengye’s father was decades ahead of the recent ‘earthing’ trend.

The blessings of the natural world can also come with curses. Bwengye, in partnership with the London School of Economics, made an educational comic regarding bilharzia. They wanted an easily digestible way to bring their findings to healthcare workers.

The characters fighting this waterborne disease are based on real people at the front lines of the solution. The main character is an investigative journalist whose father has died from liver failure, suspected to be Bilharzia. Rural healthcare workers received the finished comic books along with other information about the disease. Little did they know that behind their colourful products was a young woman from Kabale.

“Uganda still has [a long way] to go”, she says as we talk about disability advocacy and her recent project.

An NGO called Light For the World in partnership with the MasterCard Foundation enlisted Bwengye in creation of The Awareness Game. In this board game, each player gets an avatar with a disability; the severity is determined by a roll of the dice.

As players move their avatars down the path of higher education, they hit obstacles, disasters and opportunities that a disabled student would face and leave the game hopefully more sensitized and empathetic.

“Light For the World is doing a great job,” Bwengye said of raising awareness about physical and mental disabilities. The old idea of counseling as being for Western countries is fading fast, as more Ugandan recognize mental health for what it is, and seek help.

When it’s time to relax, Bwengye knows how to have a good time. On casual evenings out, she will hit the local pork joint with her husband. Football match days call for sports bar outings and a Smirnoff Black or a nice glass of Savena, her favorite frothy, foamy beer.

Now that the deep days of the pandemic are behind us, it has been time for Bwengye to get out to mix and mingle with her artist friends and colleagues in the design industry, networking seamlessly.

It also helps that she is the co-owner of Urithi Studio (Plot 3, Bata close, 5th Street Industrial Area, Kampala). Urithi means legacy in Kiswahili, and the way Bwengye is going, the art industry shall remember her for decades to come.