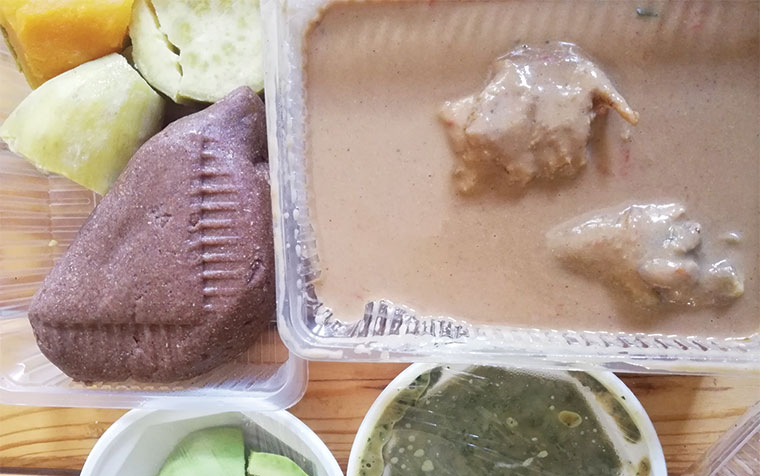 I was looking forward to how the packaging would turn out, most especially that I had ordered for the millet bread (kalo) and simsim chicken – a stew, not the grilled one sprinkled with sesame (simsim) toppings.

The packaging from the Nakawa-based Aber Luo Food Centre was nothing fancy, just the normal plastic containers. The food arrived hot via Glovo app within 30 minutes and exactly as selected – sweet potatoes, pumpkin and millet bread with simsim chicken.

The food portions at first appear smaller than the usual ‘Ugandan’ portions but the meal is so satiating that you will struggle to finish it.

It comes wrapped air-tight with cling film and not a drop of my soup slipped out. Expectedly, the kalo bore a slight dull rough texture due to the sorghum flour which also gave it the earthy and nutty taste – different from the smooth sailing version from western Uganda which is made from millet and cassava flour mixture.

I had previously tasted the chicken in groundnut paste and so I wanted to try out the chicken in sesame paste. The former is a more natural pairing compared to the latter. Though tasty aromatic and savoury with slight bitterness, the pairing with the local chicken tastes ish-ish. It is hard to like it but also hard to repudiate.

The taste of our local Ugandan chicken has already received enough plaudits from the locals and foreign diners for its sweet natural flavours and it didn’t disappoint as always.

The sesame paste and kalo, though, is a pairing made in heaven and best enjoyed with bare hands. It is that kind of food that beckons you to continue eating even when you are full. Complimentary avocado, and fresh watermelon slices and malakwang side dish are a plus.