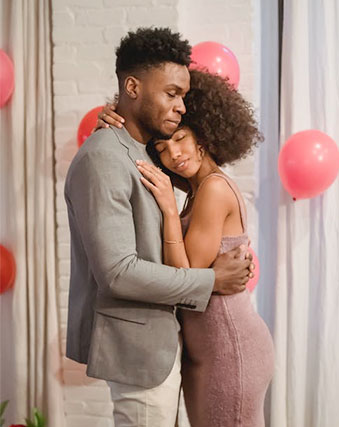 Kenneth arrived less than twenty minutes after he had hung up, and I had thankfully managed to pull myself together by then and stop crying, though I was certain I still looked like a wreck. He engulfed me in a close bear hug as soon as I opened the door, then held me at arm’s length to study me more critically.

“What’s wrong? What happened?” he asked worriedly, confirming my suspicion about what I looked like.

“Nothing; I’m sorry I broke down like that. I feel really stupid now,” I apologized, hanging my head in embarrassment.

He gently tilted it back up with his fingers beneath my chin, so he was looking directly into my eyes: “You shouldn’t feel stupid, and you really need to stop apologizing all the time. I wouldn’t come if I didn’t want to, and I want to be there for you any time you need me to be.”

I knew he meant every word and was touched by his care and concern.

“Thank you,” I answered honestly.
“You’re welcome,” he replied, then let go of me. “Did you get any rest at all after I dropped you?”
“I had planned to, but...I didn’t manage to get round to it,” I confessed guiltily.

“No wonder you broke down! The body is an amazing machine, but it needs rest too,” he lectured, as he slipped into full doctor mode. “Have you at least eaten something?”

“I cooked, but....”.
“Alright, that’s it; you’re going to come sit down and I’ll serve you a plate, which you’ll eat and then go straight to bed,” he took charge of the situation.

“I wish I could, but there’s Junior to...” “I’ll mind him while you eat; he looks pretty tired as well anyway; so, I don’t think he’ll stay up much longer,” he interrupted me.

“But I’ll have to clean up the kitchen first before....”
“You will do no such thing! I’m a bachelor; so, I’m sure I can manage to do a few dishes; you need to rest – doctor’s orders,” he added with mock command.

I was so tired, it was nice to have someone swoop in and take charge. That was one of the main things that had attracted me to David – the way he took charge and made me feel taken care of. But David was not here and Kenneth was, and I was so tired.

“Alright, I’ll sit down,” I caved in. “Good girl,” he smiled triumphantly.

I was still wound up from my meeting with Julie as I drove back to the house, but forced myself to push her from my mind the minute I walked through the front door.

Diane was already home, and at least she was clearly happy to see me; so, it was easy to focus on her and the children and forget about my altercation with Julie.

Dinner was not anything to write home about; the stew was oily, the matooke hard, the rice soggy, and for a second I thought longingly of the delicious aroma that had been wafting from the kitchen at the apartment, certain that that meal had been perfectly cooked as usual, but quickly banished the thought and reprimanded myself; one could not have it all, and in any case, I was certain this meal had been prepared by the maid; so, it was not really a reflection of Diane’s personal culinary skills.

Besides, I had already realized that if I were to fix my marriage, I would have to start by reminding myself of all the reasons I had married Diane in the first place; her ambition, intelligence, good family background, all those things were still there; so, the foundation for success was present, and all I had to do was build on it.

We made love again that night and just like the previous night, being with her felt like I was embarking on a journey of rediscovery, the only difference with this night being Diane’s increased level of participation, which I certainly was not complaining about.

It was like she was taking her own journey of rediscovery; she had always been more assertive in the bedroom than Julie was, and in its own way, that was a turn-on as well, for it was nice to have a woman who knew what she wanted and was not afraid to ask for it for a change.

Ironically, I was beginning to realize more and more, that all the things that had drawn me to Julie in the beginning, specifically her meek, submissive nature, were slowly losing their attraction.

While the girls and I were clearly thrilled with David’s apparent return to the family fold, I could tell Daniel was struggling with the sudden change.

The two had always had a somewhat strained relationship, mainly due to David’s high expectations and demands of his first born that Daniel never felt he could live up to, no matter how hard he tried, but also because Daniel had always been a ‘mummy’s boy’ and was very protective of me.

Older than his sisters, he could see the problems between David and I that they remained blissfully unaware of, and in his mind, his father was fully to blame for all of them.

The fact that I had obviously decided to put those problems behind us, did not seem to have an impact on his feelings towards his father – he clearly was not as forgiving as I was, and I was not too sure how to handle it, or if I should even get involved at all.

Maybe it was an alpha male thing and they would hash it out between themselves; David might be demanding, but he was ultimately a good father who I knew wanted the best for his son.

They would figure it out; I just hoped that whatever resolution they came to, they would arrive at it soon, for I was not ready to have this sole dark cloud linger on the horizon of my newfound marital bliss with David for too long.

There was another reason I was eager for David and Daniel to smooth out their problems – the elephant in the room: David now had another son.

Even though I would never admit it out loud, Julie’s bastard was a threat to Daniel’s position as David’s sole son, and although I had failed at eliminating this threat, I was determined that Daniel would conquer it and keep his number one position.