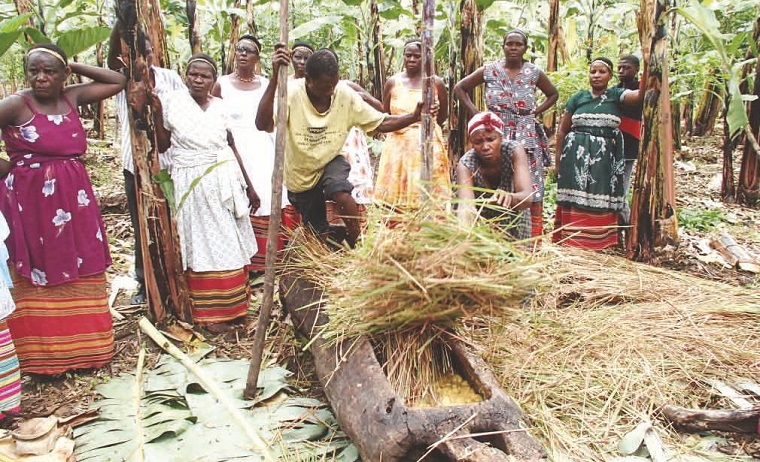 A man mashes bananas in the trough

Uganda is known for having a huge number of alcohol consumers who ingest the various types of alcohol ranging from bottled beers and wines to locally manufactured brews like ajon or malwa, and mwenge-bigere or tonto, which is mainly ‘brewed’ in the central region.

For all the flack that this beer receives from elite circles because of the way it is brewed, it is surprising how popular mwenge-bigere remains. And you will be shocked to know that nothing has changed about the ‘breweries’; as the beer’s name suggests, the brewing process involves feet. Mwenge is Luganda for alcohol, bigere is feet.

A vigil in the villages is not complete until the jerricans of tonto arrive. A traditional wedding (kwanjula) in Buganda does not truly get underway until the gourds of mwenge-bigere are carried into the compound. It is no wonder that these breweries are still alive and well even in the city centre.I recently toured some breweries and it was intriguing seeing apparatus many millennials have possibly never seen.

If you have been to Luweero and Nakawuka, you will agree with me that tonto is the common community brew made out of bananas locally called kayinja. Being a millennial myself, I was anxious to find out the processes involved in making this traditional multi-purpose drink, and to verify all the tales I have heard before. On a chilly day, I embarked on the more than 20km journey to Kungulutale village in Nakawuka, Wakiso district.

The target was Dickson Gyagenda, one of the local brewers who has spent more than 20 years in the tonto business.

Upon reaching his home, I was welcomed by a huge banana plantation where Gyagenda harvests his kayinja (it is not a common banana type these days) – a key component in making the brownish brew. He cuts down several bunches of kayinja, which are transported to his home using a bicycle. The bananas are then plucked and placed on a wooden structure above a fireplace (ekibanyi), covered with polythene and dry banana leaves to trap the heat. Smoke is then administered for about five days to quicken the ripening process and add aroma to the final
product.

In order to reduce overheating, firewood is mixed with banana stems. Alternatively, the bananas can also be buried underground to hasten ripening. After six days, Gyagenda’s raw material is now yellow in colour indicating ripeness and the ripe bananas are peeled and transferred into a wooden trough carved out of a tree stem, ready to be squashed by stomping on them using bare feet.

Many people have a hard time coming to terms with the possibility of blending juice/beer using feet. But in many winemaking countries, stomping or trampling the grapes is also a known process in extracting the juice… this is no different. At Gyagenda’s place, the trampling is  done by his workmates.

“I have to make sure that I wash my feet for about 10 minutes before I step into the trough (eryaato) and that’s the only way that I will be clean,” said Bogere, the master at stomping the bananas.

It took 36 minutes of Bogere using a lot of energy as he stomped around the trough, before the bananas became a loose paste. It looked tiring, but Bogere said he is used and has been doing it for quite some time.

“And it can’t be done in shifts; that is against the traditional settings our ancestors left in place for us,” he added.

Once the stomping has produced the desired results, spear grass is introduced to the trough to help blend the banana paste further into thinner juice, and afterwards Gyagenda adds about seven 20-litre jerrycans of water to dilute the concentrated banana juice (omubisi).

I watched as a big saucepan was placed in a slanting position next to the trough, before fresh banana leaves were used as funnels to guide the juice from the trough into the saucepan, with the spear grass acting as a sieve.

FROM JUICE TO BEER

Within minutes, the huge saucepan was full and the juice was transferred into a plastic drum. When the last drops of juice had been squeezed from the banana/grass mixture, Gyagenda and his workers started grinding sorghum on a wooden flat surface.

“This sorghum is important in fermenting the juice and if you don’t apply it, the juice will get spoilt within a day and then it can’t be fermented into alcohol,” he said.

This sorghum is first roasted to give it an aroma, before mixing it with the juice. The mixture of juice and sorghum is then covered with fresh banana leaves and polythene paper and left to ferment for 24 hours. The following day at around midday, I saw Gyagenda uncovering the fermented juice, now called tonto; he removed the sorghum grinds carefully, which he uses to feed poultry and cattle.

The workers then started filling jerrycans with tonto, ready for customers. As the filling continued, Gyagenda shared that he has daily orders from different local bars in the nearby towns and each day he makes deliveries. I had to taste this brew; being my first time, the final product was moderate sweet and the fizzy foam indicated that tonto – short for tontomera (don’t bump into me) – had quite a considerable alcohol content.

I watched as the jerrycans were loaded onto different bicycles and motorcycles for delivery to different clients that had placed their orders in advance. That day, Gyagenda made deliveries of 16 20-litre jerrycans. He does this thrice a week on Monday, Thursday and Sunday. I travelled with Gyagenda to Nsaggu trading center, where his biggest customer is located. We made our delivery at 3pm on a Thursday, but to my surprise, the bar was already busy with patrons sipping on mwenge-bigere while sharing funny stories about football and  family.

A jerrycan of tonto costs Shs 45,000 to 50,000, while a glass goes for Shs 1,000. The business has sustained Gyagenda’s family, including paying school fees for his sons – one is at university, the other in senior three. This traditional art, like others such as making bark cloth, is passed down through generations. Gyagenda attributes his success in the business to his uncle, who taught him the dos and don’ts of the trade.

Will Gyagenda’s educated sons carry the tradition forward? Time will tell. Not that his is a trade without challenges; Gyagenda’s brewing activities are heavily dependent on his banana plantation, yet occasionally it suffers from banana wilt and other bacterial diseases,  paralyzing operations.

Also, “the locals who cut the banana leaves for cooking reduce the plants’ productivity, hence affecting the harvest”.

Gyagenda said despite it being a business to him, this beer has had profound benefits starting from the days of our ancestors, who discovered its recipe and started brewing it. Gyagenda said the local brew is a symbol of tradition in Buganda and the biggest part of its relevance is revealed during the kwanjula ceremonies.

“The most important item on kwanjula ceremony is a gourd of alcohol. As the Baganda usually say, omukazi agulwa mwenge, meaning a wife is paid for with wine,” he added.

Granted, both sexes were free to savour its rich taste even back in day, but it was abominable for women to participate in certain phases of tonto making. Women can grow and ripen the bananas, but they don’t stomp the bananas. According to Keeya Mwanje, leader of the leopard clan, the exclusivity to men was because women did not have as much strength as men.

“That aside, many didn’t feel comfortable having women take charge of the process, as they could do so while on their menstrual periods. Sexist as this was, they argued that they didn’t want to risk contaminating the drink,” Mwanje added.

Even in Kampala suburbs such as Mulago and Mengo, this traditional brewery is very much operational, catering mainly to kwanjula clients.