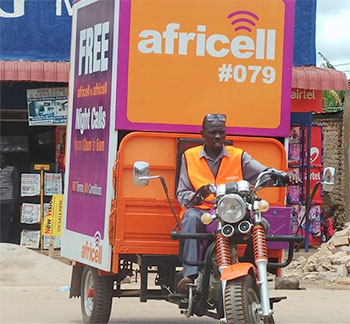 Africell is closing, and my heart is breaking. I’m a little lost, a little broken, a little damaged.

I know what you are thinking; all that emotion over a telecom company? Was it your company? Did you even work there? You were just a customer and you can get another number; so, what’s the big deal?

I’ll answer with a single word: loyalty. You see, I have been a customer of Africell from when they were still Orange, and that is a lot of years. I’m not quite sure of the precise number of years because I was not counting; all I saw was a network that provided an honest, reliable and affordable service, chose it, and stuck with it. That is loyalty.

“Does anyone even call you? It’s so expensive calling Africell,” people would complain.

“If they need me, they will call; it’s not expensive for me to call them; so, when I need them, I’ll call,” was my response.

“At least get a second number from another network, so you are more accessible,” they would plead.

“Refer to point number one,” I would answer.

I was not being arrogant, I simply did not need a second or third number, because the one I had worked for me. Africell’s closure got me thinking about loyalty and all the other times in my life that it has led me down this same exact path. I remembered the radio station that I had worked at for over ten years; it too had closed and just like now, I was a little hurt, a little lost, a little broken.

Why wouldn’t I be? I had given ten years of my life to that station; on some days, I had spent nights at work giving it my all, and then some. Even when it became obvious that the station’s financial problems were not going away, when salaries started being paid late, then not at all for months on end; even when it cost more for me to go to work than stay at home, even then I stayed – that is loyalty.

Some may call it stupidity, but the way I saw it, I had chosen to work at this station because I believed in its vision and what it stood for. I loved the music that I played, and the people I worked with (alright, some of them, the others not so much, but that’s a story for another day).

The point is that even though things weren’t going great, there was something about this station that I believed in, that had made me choose it over other bigger, more established stations, and so I stayed – that is loyalty.

I think loyalty is an admirable quality that we should try to cultivate in all aspects of our lives. Your friends want to know that you will have their backs, no matter what. Your employer wants to know you won’t jump ship when things get tough, and that you think of their company like it is your own.

Your spouse wants to know you won’t cheat on them because you saw someone with a bigger chest or wallet – that is loyalty. True, many times your loyalty will not be rewarded; in fact, many times it will end in heartache and pain.

The friends whose backs you always had, could turn around and stab you in yours; the company you worked yourself to the bone for, might still close shop; the spouse you gave your all to, might still leave you for another.

Choose loyalty, nonetheless, for no matter what the end looks like, there was something there that earned your loyalty; so, look back and appreciate the journey regardless of where its path leads.

“So, now that Africell is closing, what network are you crossing to?” the ‘why can’t you get a second number?’ league, now ask smugly.

“I don’t know,” I shrug and try to change the subject.

The truth is I don’t want to think about changing my number and learning a new one; so, like an ostrich, I bury my head in the sand, and don’t. Maybe I’m in denial.

Now, if only Africell would give me the chance to exercise my denial in peace; Africell Uganda, please stop sending me messages reminding me of your imminent departure, and advising me to use up my remaining airtime.

Airtime. Really! After all these years, you think my biggest concern is using up my airtime balance? Like Gwen Stefani from the band No Doubt sang:

Goodbye Africell, I will miss you.